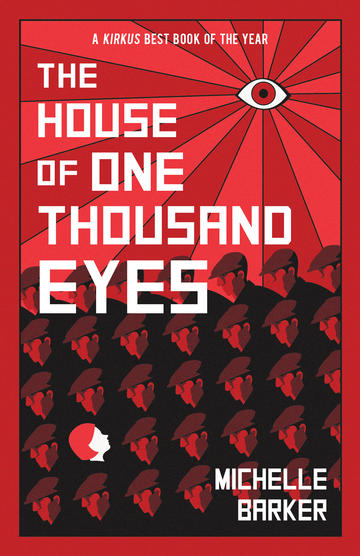 The House of One Thousand Eyes

Who can Lena trust to help her find out the truth?

Life in East Germany in the early 1980s is not easy for most people, but for Lena, it’s particularly hard. After the death of her parents in a factory explosion and time spent in a psychiatric hospital recovering from the trauma, she is sent to live with her stern aunt, a devoted member of the ruling Communist Party. Visits with her beloved Uncle Erich, a best-selling author, are her only respite.

But one night, her uncle disappears without a trace. Gone also are all his belongings, his books, and even his birth records. Lena is desperate to know what happened to him, but it’s as if he never existed.

The worst thing, however, is that she cannot discuss her uncle or her attempts to find him with anyone, not even her best friends. There are government spies everywhere. But Lena is unafraid and refuses to give up her search, regardless of the consequences.

This searing novel about defiance, courage, and determination takes readers into the chilling world of a society ruled by autocratic despots, where nothing is what it seems.

MICHELLE BARKER is the award-winning author of The House of One Thousand Eyes as well as a poetry chapbook, a YA fantasy novel, and a picture book. Michelle also works as an editor and workshop leader. She lives in Vancouver, British Columbia.

“This terrific piece of historical fiction . . . is a nuanced portrait of a young woman who is struggling to survive in a very flawed and difficult world. Highly recommended.”

“This is a quietly intense historical thriller that explores a dark corner of world history not often featured in YA novels. The foreboding setting is chillingly rendered in immersive period detail, contributing to the mounting sense of suspense . . . Ideal for fans of historical fiction, slow-burn thrillers, and dystopias in the vein of 1984, this sophisticated story is bound to grip its readers and not let go.”

“A complex and emotional read recommended for all YA collections.”

“This compulsive page-turner . . .  has the propulsion of a thriller, but Barker’s observant, poetic language gives it a deep, dark texture, offering layer upon layer of historical and psychological richness.”

“A stunning and compassionate portrait of a young woman fighting to retain her sense of self under a repressive regime.”

“Barker crafts a chillingly realistic story . . . Throbbing with tension, the plot is supported by Lena’s complexity as well as a host of masterfully rendered dynamic characters. Fans of historical fiction will flock to this title, as will dystopian devotees.”

“Barker’s novel portrays in vivid detail what life was like in a totalitarian Communist regime.”

“The novel’s atmosphere is tense and claustrophobic, and the narrative describing the dehumanizing policies of the time is gripping. This is great read to discover a time unlike our own.”

“A brilliant novel . . . Michelle Barker’s subtext about mental health, social inequalities and the freedom of expression is never lost in the story . . . a monument that honours lives lived with courage and conviction, never blocking the light of truth, and she does so with strength of words and greatness of style.”