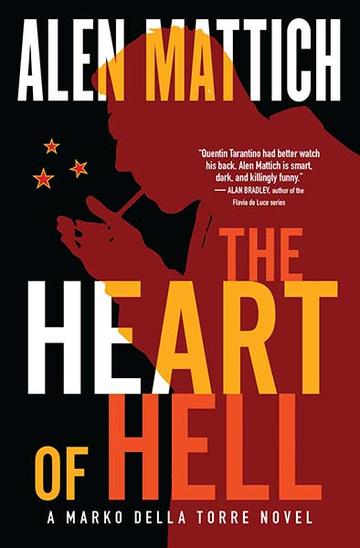 The Heart of Hell

In the third installment in Alen Mattich’s highly addictive Marko della Torre series, Alen Mattich delivers a powerful political thriller that depicts the horrors and machinations of the Yugoslav civil war and the humanity of those who survive it.

Autumn 1991. Civil war has broken out in Yugoslavia with Croatia’s declaration of independence, and former secret policeman Marko della Torre is set adrift. Department VI, the internal investigations unit, is now in a state of paralysis as Belgrade struggles to maintain its hold as the region’s centre of power. When the body of a young woman, identified as American agent Rebecca Vees, washes up on the shores of Italy, della Torre is summoned by U.S. authorities. He is the last person to have seen Rebecca alive. Her two colleagues have also been found shot dead on an island in Croatia, and della Torre is coerced into locating the man they think is responsible: the corrupt and unscrupulous Zagreb cop, Julius Strumbic. Forced to navigate Yugoslavia’s bloody civil war in order to track Strumbic’s whereabouts, della Torre has to decide whether he will warn his old friend or give him up to the Americans to save himself.

About the Author
Alen Mattich is the author of Zagreb Cowboy and Killing Pilgrim, the first two novels in the Marko della Torre series. Based in London, U.K., he writes for Dow Jones and the Wall Street Journal.
Author profile page >
Awards
Editorial Reviews

This is high adventure at its best

Missed the first two Marko della Torre novels? Read this one and then grab the others because Marko is a cop to be savoured.

Not only does he understand the unfathomable ethnic hatreds in his part of the world, he also writes about them with clarity and a satisfying sense of pace.

a heady mix of spy thriller and war reporting along the crystalline Adriatic… Each book in this series is a real treat, but this last was his best. I didn’t want it to end.