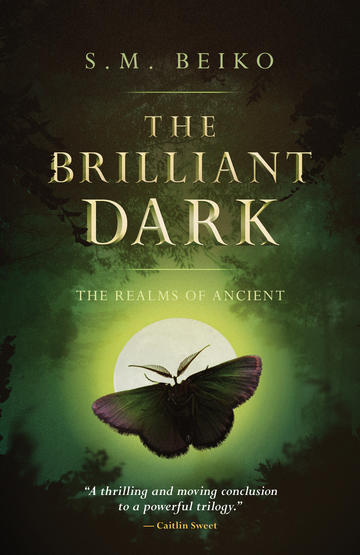 The Realms of Ancient, Book 3

Marked by Darklings and Death alike, Saskia is a mechanically minded Mundane, raised by Barton and Phae on daring stories about Roan Harken. But the world Roan left behind is in turmoil. The Darklings now hang in the sky as a threatening black moon, and with the order-maintaining Elemental Task Guard looking to get rid of all Denizens before they rebel, Saskia’s only option is to go into the Brilliant Dark and bring Roan and Eli back.

But nothing is ever that simple.

The Brilliant Dark is the final, thrilling chapter in this series about gods, monsters, and the people who must decide if they’re willing to pay the ultimate price to protect the family they found . . . in a world that may not be worthy of saving.

“What happened?” I asked the silent gathering, turning momentarily away from the Opal. They all seemed to be waiting. “Where’s Deon?”

“Chaos. Harm. Silence,” said another. “You were a stonebearer. You broke your sacred trust with Deon. You broke her trust with all of us.”

Their voices were all strange and harsh — it was difficult to keep track of them. “I didn’t do it on purpose!” I shouted over them. “We were trying to wake Ancient, to open the way to the Brilliant Dark —”

“Naïve pup,” said another. For a second my heart leapt, and I thought it was Sil. Could she actually be down here? But again, I couldn’t tell who had spoken.

“The Darklings have slipped their prisons,” volleyed another Fox. “They’re loose in the Uplands. Meanwhile, Deon is gone, the Opal is ruined, and the realms are connected now. Connected as they were never meant to be.”

That one was more than a criticism, pure blame. I glanced up over my shoulder, noticed then that there was a wild split through the Calamity Stone and that it didn’t shine at all.

I turned back. “Look, Deon herself was behind me on this. On stopping the Darklings. We had done it. We’d won.” Now I was bordering on hysterical, begging myself, as much as them, for it to be true when I knew better.

“Don’t you understand?” This was the Fox closest to my feet; this voice was full of despair. “You cut us off. All of us. The Matriarchs are missing. Not even the Moth Queen can ferry the Denizen dead to their promised homelands. You did this.”

“Lost.” The word echoed around the chamber, barked in uneven, angry, miserable tones. “All is lost.”

The Opal above me made my hairline bristle. What the hell were they all expecting me to do now?

“You must finish what you started.”

I froze. The Fox was sitting directly in front of me, surveying me with its singed eyes. I had definitely recognized that voice.

The shade stepped forward, and its small fox body rose, shifted, grew. It was the shadow of a man, the outlines faint. The other Foxes changed all around me, too, taking the shapes of the people they’d once been. Details in faces were difficult to discern; they were still just spirit shadows. Their hollow pinprick eyes were still the same, boring into me. But this close, I could see the features of this fox shift: the outline of a beard, of a mouth twisted in aggravation. Jacob Reinhardt, one of the Foxes from the Conclave of Fire, the one who’d challenged me at every turn — who’d nearly killed me once. It looked like he hadn’t been so lucky in the intervening weeks since I’d seen him last.

I backed up, tripped, and landed hard beneath the Opal. I looked up in time to see something spun in the air at me, and I opened my hands to catch it.

A sword hilt. Bladeless, but heavy all the same.

How does a venerable institution adapt quickly to sometimes volatile global markets and shifting domestic demands of the late twentieth century?

In A History of Canadian Imperial Bank of Commerce, Volume 5 1973-1999, the story of CIBC unfolds amidst a backdrop of world-changing events, economic booms and busts, and memorable moments in Canadian history. This era of the bank saw challenges such as the OPEC crisis and recession-driven collapses of iconic companies like Massey-Ferguson, Dome Petroleum, and Olympia & York. CIBC weathered such storms, while also pursuing opportunities in international banking and corporate acquisitions, and embracing technology and education. The lessons of the past shine through in this long-view of how to remain competitive and continue to evolve to meet the needs of millions of clients. All the while, the bank’s commitment to its communities is clearly evident in the passionate and generous spirit of CIBC’s team members, and its corporate support as one of the leading donors in the nation.

At the heart of all the historical highs and lows are the people of CIBC, here profiled from the executives responsible for the bottom line to those working on the front lines, serving bank clients day in and day out. A History of Canadian Imperial Bank of Commerce brings to life the strategic changes that have propelled CIBC forward as it creates enduring value for its stakeholders.

S.M. Beiko is an eclectic writer and artist based in Winnipeg, Manitoba. She also works as a freelance editor, illustrator, and graphic designer. Her first novel, The Lake and the Library, was nominated for the Manitoba Book Award for Best First Book as well as the 2014 Aurora Award. The first novel in this series, Scion of the Fox, won the 2018 Copper Cylinder Award.

“A storyline with twists aplenty. The cast is multiracial and multicultural, with Scottish and Japanese lead Saskia, returning supporting characters such as Inuit Natti (who explicitly sees the intersectionalities at play in the new order), and other minor characters; both straight and lesbian romances are represented, and there’s a genderqueer character. Highly sophisticated and fully immersive.” — Kirkus Reviews

“In Children of the Bloodlands, Saskia was a child. When The Brilliant Dark begins, she’s seven years older and trying desperately to be wiser, as the fate of her friends, and multiple worlds, rests with her. In this final book of her Realms of Ancient series, Beiko leads Saskia and her readers back and forth in time to tell a story about stories, and the ways in which they destroy, redeem, end, and endure. It’s a thrilling and moving conclusion to a powerful trilogy.” — Caitlin Sweet, author of The Door in the Mountain and The Flame in the Maze

“For those of us in the know, author S.M. Beiko’s imagination and style are a breath of fresh air in a genre of literature that can, at times, seem heavy-handed and laden with tired tropes. With The Brilliant Dark, the author brings her celebrated prairie-goth series to its thrilling end. This final instalment is an incredible achievement — passionate, engaging, and innovative in all the right ways. The Realms of Ancient series is Canada’s answer to Neil Gaiman’s American Gods — an absolute must-have for fans of Canadian science fiction and fantasy literature.” — Charlene Challenger, author of The Voices in Between and The Myth in Distance

“The third book in The Realms of Ancient series features epic world-building, rich mythology and high-stakes adventure.” — Globe and Mail

“The Brilliant Dark has some exciting action scenes, and Saskia is an interesting character struggling to understand her place as a Mundane in a world of myths. The Denizen-Mundane conflict is compelling with its resonances of real-world repression and the individual stories of conflicted loyalty and betrayal.” — CM: Canadian Review of Materials