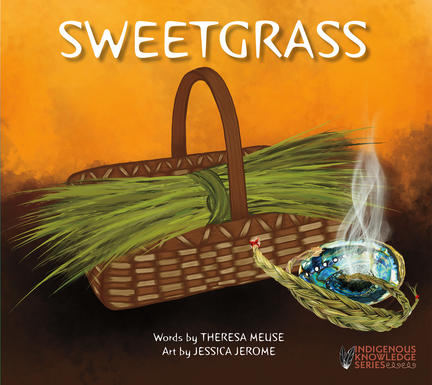 A vibrant story of traditional indigenous knowledge and the many uses of sweetgrass.

It's early July, and for Matthew and his Auntie that means one thing: time to go sweetgrass picking. This year, Matthew's younger cousin Warren is coming along, and it will be his first time visiting the shoreline where the sweetgrass grows.

With Auntie's traditional Mi'kmaw knowledge and Matthew's gentle guidance, Warren learns about the many uses for sweetgrass—as traditional medicine, a sacred offering, a smudging ingredient—and the importance of not picking more than he needs. Once the trio is back at Auntie's house, she shows the boys how to clean and braid the grass.

From the duo behind the bestsellers The Gathering and The Sharing Circle, this heartfelt story about the gifts we receive from Mother Earth and how to gather them respectfully offers thoughtful insight into a treasured Mi'kmaw tradition.

Sweetgrass grows in wet meadows, low prairies, and the edges of sloughs and marshes . It grows from Labrador to Alaska, south to New Jersey, Indiana, Iowa, New Mexico, and Arizona. Widely used by North American indigenous peoples from many different Nations, it is also considered one of the "four sacred medicines" by many Plains Indians.

Born and raised in the Bear River Mi'kmaq First Nation Community, Theresa Meuse-Dallien graduated from Dalhousie University in 1990 and was employed for several years in sharing Mi'kmaw culture in the schools. Theresa has published several articles, and presently shares cultural knowledge with government and other groups. The stories she shares are teachings passed on from the Elders.

Arthur Stevens is a Mi'kmaw community member from Millbrook First Nation in Nova Scotia. Throughout his professional and personal life, Arthur has worked with and for Indigenous peoples and organizations across Atlantic Canada. As a published artist, illustrator, and graphic designer, Arthur is an award-winning Indigenous professional who takes pride in sharing his creative works, and is always looking for artistic opportunities that engage and promote connections between Indigenous and non-Indigenous peoples.

Other titles by Theresa Meuse

Other titles by Arthur Stevens

The National Day for Truth and Reconciliation