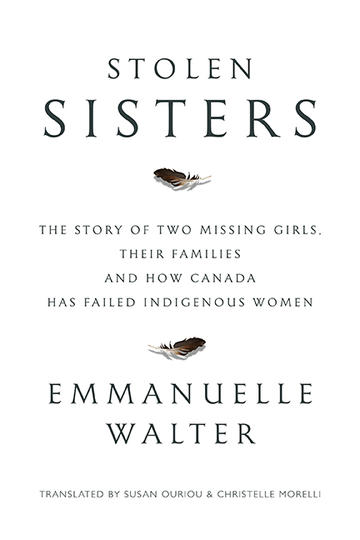 The Story of Two Missing Girls, Their Families, and How Canada Has Failed Indigenous Women

The Globe and Mail praises Stolen Sisters for Emmanuelle Walter’s “attempts to bring this national crisis out of the realm of armchair speculation and into the public conscience.” It has been widely reported that since 1980, 1,200 indigenous women in Canada have been murdered or gone missing. This alarming official figure reveals a national tragedy and the systemic failure of law enforcement and all levels of government to address the issue. A federal inquiry was finally launched in 2016, but the violence continues unabated.

In Stolen Sisters, journalist Emmanuelle Walter documents the disappearance of two young women, Maisy Odjick and Shannon Alexander, teenagers from western Quebec who have been missing since September 2008. Via personal testimonies, interviews, press clippings and official documents, Walter pieces together the disappearance and loss of these two young lives, revealing these young women to us through the voices of family members and witnesses. Hailed as a “a moving and deeply shocking work of investigative journalism” (49thShelf.com), Stolen Sisters forces us to confront the idea that not only is Canada failing First Nations communities, but that a feminicide is taking place.

EMMANUELLE WALTER is an independent journalist. She has worked for Liberation, Le Nouvel Observateur, ARTE Radio and Terra eco. Originally from France, she lives in Montreal.

SUSAN OURIOU is an award-winning writer and literary translator working from French and Spanish into English with over 30 literary translations to her credit. She has won Canada’s Governor General’s Award for Literary Translation and been part of the Banff International Literary Translation Centre since its creation. She has also worked as faculty for The Banff Centre’s Indigenous Writing program and is the editor of the 2010 anthology Beyond Words: Translating the World and the 2014 bilingual anthology Languages of Our Land: Indigenous Poems and Stories from Quebec.

CHRISTELLE MORELLI is a literary translator and French immersion teacher. She has translated several works of fiction for publication, including Languages of Our Land: Indigenous Poems and Stories from Quebec. Having lived in Quebec and France, she now makes her home with her family in Western Canada.