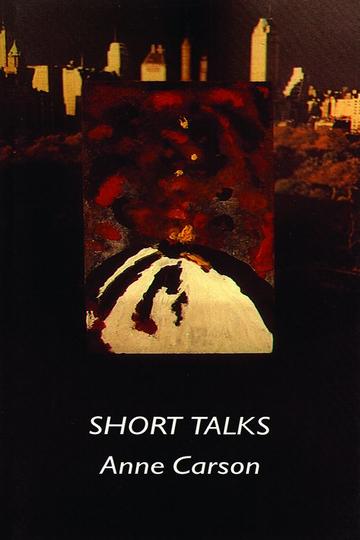 Lyric sermons: Riddle-poems that consist only of answers: Lou Reid meets Claude Monet and converts to Zen: The pure hilarious ache of ontology: Short Talks is elegiac, perceptive, droll. It is the first book-length collection by an accomplished, original voice. Sunday mornings are never going to be the same again.

"The voice is laconic and composed but its images come off these pages resonant (more than resonant, shaking) with their own newness." -- Don Coles

"Short Talks was Anne Carson's first book of poems, and it signaled to the world of poetry that a new and distinctive voice had arrived on the scene."--Jon Eben Field, thirdspace: a journal of feminist theory and culture

"Each piece in Anne Carson's Short Talks is a startling gemÑsome disorienting, some intimate, some wry, some wistful, many bright and impish. This volume, slender in multiple dimensions, will be easy to return to again and again."--Vicki Ziegler, Book Gaga

"It's the unexpectedness of Carson's observations that makes Short Talks so appealing ... "--Barbara Carey, Books in Canada