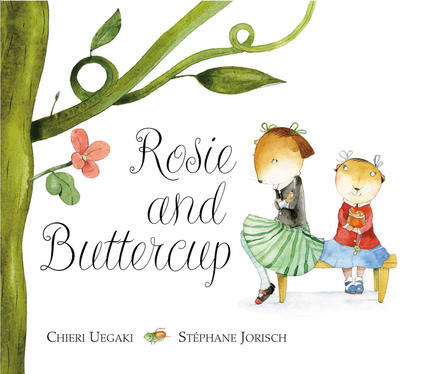 “I don't want a baby sister.” Does Rosie really mean it? Her baby sister, Buttercup, has been a bit of a handful lately. She won't leave Rosie alone, she cries at opera-singer level and whistles when she sleeps.

Before Buttercup came along, Rosie's life was blessed. Her schedule was filled with dance and voice lessons. Best of all, she didn't have to share her pet crickets, Eenie and Meenie, with anybody. Things get so bad that Rosie decides to give her little sister away --- to a good home, of course. But as she says good-bye to Buttercup forever, Rosie can't ignore a squeezy feeling in her chest.

From the perfectly paired creative team who brought you the bestselling Suki's Kimono comes a touching picture book about two sisters.

Stéphane Jorisch is one of Canada's most celebrated illustrators. He is a two-time winner of the Governor General's Award for Children’s Illustration for Jabberwocky and The Owl and The Pussycat. He grew up in Montréal, Quebec, where he now lives with his family.

... Uegaki's saucy protagonist and her wry observations will garner fans among young readers, Jorisch's watercolor illustrations have a quaint feel to them ...This understanding offering is bound to reassure young readers also struggling to adjust to a new sibling.

Rosie's emotions are expressed ... in a thoughtful and gentle way ... Children will want to hear this story more than once ...

When Rosie can no longer tolerate her little sister, Buttercup, she gives her away to the neighbours. But as she says goodbye to Buttercup forever, Rosie can’t ignore the squeezy feeling in her chest. She soon discovers that life without Buttercup isn’t at all what she expected.

Other titles by Chieri Uegaki

Other titles by Stéphane Jorisch

What Does It Mean to Be Kind?

A Gift for Sophie

My Name Is Chicken Joe

by (author) Trout Fishing in America
illustrated by Stéphane Jorisch