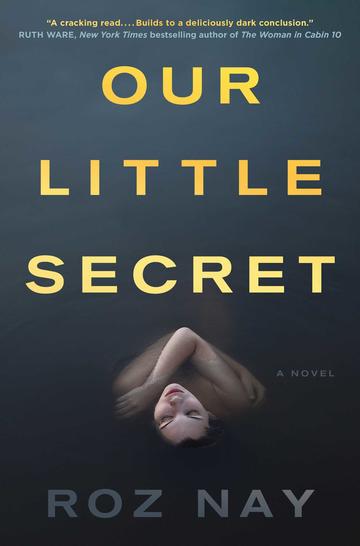 For fans of In a Dark, Dark Wood and All the Missing Girls comes Our Little Secret, a compulsive and thrilling debut about a missing woman, a tangled love triangle, the secrets we keep and the secrets we share.

The detective wants to know what happened to Saskia, as if I could just skip to the ending and all would be well. But stories begin at the beginning and some secrets have to be earned.
Angela is being held in a police interrogation room. Her ex’s wife has gone missing and Detective Novak is sure Angela knows something, despite her claim that she’s not involved.
At Novak’s prodding, Angela tells a story going back ten years, explaining how she met and fell in love with her high school friend HP. But as her past unfolds, she reveals a disconcerting love triangle and a dark, tangled web of betrayals. Is Angela a scorned ex-lover with criminal intent? Or a pawn in someone else’s revenge scheme? Who is she protecting? And why?
Twisty and suspenseful, Our Little Secret is an intense cat-and-mouse game and a riveting thriller about the lies we tell others—and ourselves.

About the Author
Roz Nay is the bestselling author of Hurry Home and Our Little Secret, which won the Douglas Kennedy Prize for best foreign thriller in France and was nominated for the Kobo Emerging Writer Prize for Mystery and the Arthur Ellis Best First Crime Novel Award. Roz has lived and worked in Africa, Australia, the US, and the UK. She now lives in British Columbia, Canada, with her husband and two children. Visit her at RozNay.com or connect with her on Twitter @RozNay1 and Instagram @RozNay.
Author profile page >
Excerpt
Editorial Reviews

“Keeps readers enthralled with prose that’s at once lyrical and incisive.”
— SHELF AWARENESS

“A gripping and unsettling story, that left me guessing until the very end.”
— B. A. PARIS, author of Behind Closed Doors

“Roz Nay shows how the past is never truly past, and can be darker than we guess, especially when it comes to first loves. A most promising debut.”
— ANDREW PYPER, bestselling author of The Demonologist and The Only Child

“A guaranteed good read. . . . You’re likely to read it in one breathless sitting.”
— THE GLOBE AND MAIL

“A clever and addictive read that had me enthralled from the first chapter all the way to the shocking twist that left me breathless. I stayed in bed one lazy afternoon and polished it off, then stared up at my ceiling, stunned that it was over and still half in love with the characters. It’s been a long time since I’ve read a debut this good. Roz Nay is going to be a name we hear a lot of in the future.”
— CHEVY STEVENS, bestselling author of Still Missing

PRAISE FOR OUR LITTLE SECRET
NATIONAL BESTSELLER
WINNER OF THE DOUGLAS KENNEDY PRIZE FOR BEST FOREIGN THRILLER
SHORTLISTED FOR THE KOBO EMERGING WRITER PRIZE AND THE ARTHUR ELLIS BEST FIRST CRIME NOVEL
“Roz Nay’s addictive debut proves that dark secrets of the past cannot be forgotten.”
— US WEEKLY

“Fans of Paula Hawkins and Ruth Ware will devour this twisty psychological thriller; Nay has expertly crafted a narrative that has the potential to veer in several directions, keeping the readers enthralled and guessing until the end.”
— LIBRARY JOURNAL (Starred Review)

“A cracking read. Flicking back and forth from first love to a police cell, Our Little Secret builds to a deliciously dark conclusion.”
— RUTH WARE, bestselling author of Woman in Cabin 10

“Bound to draw comparisons to Ruth Ware and Sophie Hannah, Roz Nay’s crackling debut begins on the scene of a woman being interrogated by police for hours on end, and from there, unfurls a memorably twisted love story.”
— ENTERTAINMENT WEEKLY

“In her debut novel, Roz Nay lures readers down a dark and tangled path that explores the aftereffects of lost first loves. Our Little Secret is a gripping addition to the psych thriller world.”
— MARY KUBICA, New York Times bestselling author of The Good Girl

“In Roz Nay’s tightly woven debut, Our Little Secret, we meet Angela—a wily woman with a twisted love story, who is in quite a heap of trouble. As the story unfolds and the mystery deepens, the breadcrumbs Nay expertly leaves behind reveal a dark truth you won’t see coming. Ruth Ware fans will love this compulsive, impossible-to-put-down novel!”
— KARMA BROWN, bestselling author of Come Away with Me and The Choices We Make

“One of the best grip-lit titles of the year. . . . The writing, it must be said, is supremely seductive. Nay draws the reader in with compelling characters, deliciously dark themes, clever turns of phrase and heightened levels of suspense. What’s more, the intimate bond that Angela shares with charismatic, sun-kissed swim captain HP is nothing short of mesmerizing. Nay’s psychological thriller will have readers clamoring for more.”
— TORONTO STAR

“A stunning debut. . . . Our Little Secret is a deliciously twisted novel about a love triangle. It’s so suspenseful your heart will be pounding as you hurry to the end. Roz Nay has proven she can write the thriller you haven't read before.”
— LIZ FENTON and LISA STEINKE, authors of The Good Widow

“Nay expertly spins an insidious clever web, perfectly capturing the soaring heights and crushing lows of first love and how the loss of that love can make even the sanest people a little crazy. Carve out some time for this riveting, one-sitting read.”
— KIRKUS REVIEWS

“A sneaky-smart, charismatic debut that will win fans among those who enjoy the kind of duplicitous and deliciously complex psychological suspense written by Ruth Ware, Sophie Hannah, and Erin Kelly.”
— BOOKLIST (Starred Review)