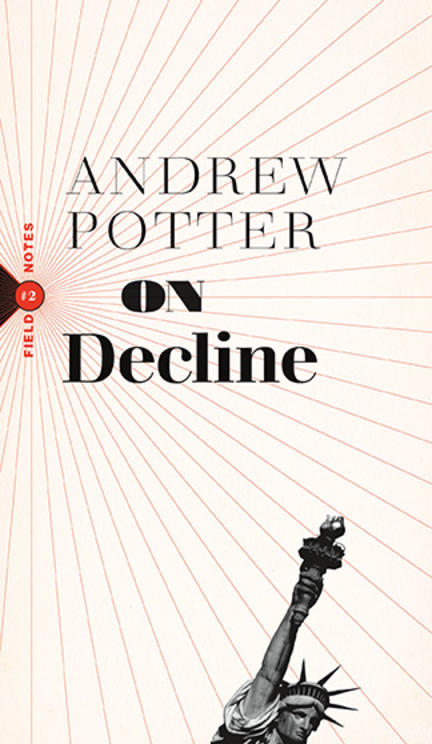 What if David Bowie really was holding the fabric of the universe together?

The death of David Bowie in January 2016 was a bad start to a year that got a lot worse: war in Syria, the Zika virus, terrorist attacks in Brussels and Nice, the Brexit vote—and the election of Donald Trump. The end-of-year wraps declared 2016 “the worst … ever.” Four even more troubling years later, the question of our apocalypse had devolved into a tired social media cliché. But when COVID-19 hit, journalist and professor of public policy Andrew Potter started to wonder: what if The End isn’t one big event, but a long series of smaller ones?

In On Decline, Potter surveys the current problems and likely future of Western civilization (spoiler: it’s not great). Economic stagnation and the slowing of scientific innovation. Falling birth rates and environmental degradation. The devastating effects of cultural nostalgia and the havoc wreaked by social media on public discourse. Most acutely, the various failures of Western governments in their responses to the COVID-19 pandemic. If the legacy of the Enlightenment and its virtues—reason, logic, science, evidence—has run its course, how and why has it happened? And where do we go from here?

Andrew Potter is the coauthor of the international bestseller Nation of Rebels. A journalist, writer, and teacher, he lives in Toronto. Follow him on Twitter (@jandrewpotter).

Praise for On Decline

"Like its historic ancestors, On Decline deserves a wide general audience and should be required reading for the incoming federal government." —Winnipeg Free Press

“Potter’s broad-ranging survey makes a good case that the authenticist fantasy is deeply embedded in the culture.”—Wall Street Journal

“[Andrew Potter] offers a shrewd and lively discussion peppered with pop culture references and a stimulating reappraisal of the romantic strain in modern life.”—Publishers Weekly

“Potter weaves elements of history, philosophy and pop culture together in a book that will leave an impression even if it doesn’t necessarily show us the path. Is Andrew Potter one of the great thinkers of our age? He may well be: this is great stuff.”—January Magazine