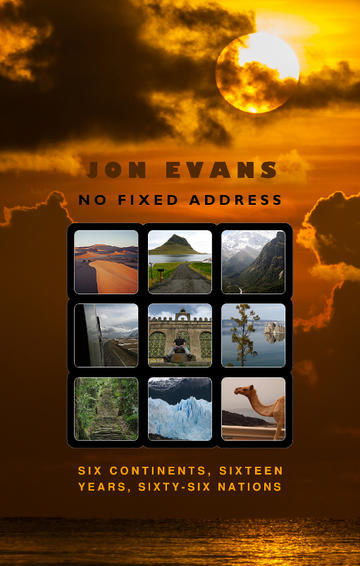 The real-life adventures of award-winning thriller writer Jon Evans as he travels through sixty-six countries in Africa, the Middle East, Europe, the Americas, Australasia and Asia over a period of sixteen years.

Born and raised in Waterloo, Ontario, Jon Evans is the son of a Rhodesian expatriate father and a tenth-generation Canadian mother. He studied Electrical & Computer Engineering at the University of Waterloo, graduated in 1996, and promptly moved to California to work in the burgeoning software industry. Evans spent the next fourteen years working, writing, and travelling far and wide around the globe before finally returning to Canada in 2010 -- for now. Evans is the author of four thrillers, one graphic novel, and one dark urban fantasy, and his journalism has been published in Wired, The Guardian, Reader's Digest and The Globe and Mail. His first novel, Dark Places, won the 2005 Arthur Ellis Award for Best First Novel. Evans currently lives in Toronto and at www.rezendi.com.

I have been to the middle of nowhere, and it is not the Bwindi Impenetrable Forest. It is, rather, where you go when your teenage taxi driver takes a wrong turn en route to said impenetrability and continues for half an hour unawares.

The Bwindi Impenetrable Forest is a national park in remote southwest Uganda, on the Congo border. It is best known for being home to half of the world's mountain gorillas (the other half are fifty kilometres south, in the Virunga range of volanoes that straddle the Uganda-Rwanda-Congo borders). Bwindi means 'dark.' The Dark Impenetrable Forest?it's like something out of a fantasy novel, isn't it? I mean, Mirkwood's got nothing on this place.

The bottle shop next door sold beer, Coke and water. There was a post office; a police station; a gas station with hand-cranked pumps; an immigration post (the town is right on the border of the Democratic Republic of the Congo); a hotel/bar with a pool table; a few dry-goods-type stores, J. Nkrumah and Sons and such by name, with shadowed, indeterminate contents; and, in the town's one concession to the twenty-first century, an MTN mobile-phone airtime-voucher stall. There were two secondary schools, one Muslim and one Christian, and a bunch of one-room primary schools. There were fewer than a dozen vehicles. But for the vehicles, the MTN store and the banana-tree backdrop, we could have been at the Texas-Mexico border a hundred years ago.

The nearest town to Bwindi is called Butogota, and even more than most small African towns, it's like something out of the Wild West. A single wide street of blasted dirt runs between two rows of storefronts, concrete blocks with tin awnings. The store I entered sold big sacks of wheat and beans; bags of salt, sugar and tea; soap (in long unwrapped bars), candles, baking soda, matches, toilet paper, paraffin?and that was it. No chocolate, no sweets, no biscuits, no baby food, no Vaseline, no lotions or powders?none of the other usual array of colourful disposables found in most African shop-stalls.

I was first made aware of our misdirection when the top of my head smacked into the roof of our car. I'd splashed out on a private ('special hire') taxi to Bwindi, public transit being chancy-to-unavailable except on market day, and somehow contrived to fall asleep despite the humped, fissured, rocky dirt road that winds along ridgetops and steep hillsides, past glorious views of the Western Rift Valley, and the cloud-shrouded Ruwenzori and the Virunga volcanoes, along terraced fields and stands of eucalyptus forest, during the (theoretically) three-hour journey. But when I woke, the road was no longer dirt. It wasn't even, really, a road. Barely even the idea of a road: more of a wide grass walking trail, very uneven?hence the wake-up bump'segregating raw jungle from small semi-cultivated fields and banana plantations.

I gently suggested to Isaac-the-driver that this couldn't be right. (Thinking: I know they call it impenetrable and all, but this is ridiculous.) Isaac bridled but eventually, with universal male reluctance, agreed to stop and ask directions. Of who? I thought, but indeed, round the next bend, next to a small igloo-like structure made of mud and strips of bark, there they were: a woman and five children, dressed in colour-drained rags, staring at us amazed.

Information was exchanged. A clearing was found, a little ways on, in which to turn around. We drove past the (now more amused than amazed) family and rattled back up a road I wouldn't have taken a 4WD down, much less a battered Corolla. It was vertiginously steep, narrow, twisted, uneven and incredibly bumpy. As I offered silent prayers of thanks to Toyota engineers, two parallel strips of dirt emerged from the grass; then the grass meridian vanished; and finally, thirty minutes' drive and maybe twelve kilometres after turning around, we were back on the proper route to Bwindi.

To give Isaac credit, he did drive with ferocious skill. If only his navigational abilities were commensurate. Or his negotiating skills. I later learned that he'd severely undercharged me, which may explain his failure to turn up today for the agreed-upon return leg.

[... Continued in No Fixed Address]

No Fixed Address is a rare treat as a travelogue, managing to be thoughtful, hilarious, and inspiring all at once.

Ricocheting across continents in Jon Evans's No Fixed Address, a collection of his travel notes, is both an exhilarating and a revealing experience. Global insights are packaged with panache, and a spirit of adventure comes through the text, whether its intrepid traveler finds himself in rewarding new locales or wrestling with mishaps.

The book is divided into global regions, with Evans hitting all areas save Antarctica-he's daring, sure, but never that divested of creature comforts. He careens across Africa first, lauding the beauty of its sub-Saharan nations and weaving in lessons on how the continent moved from colonialism into modernity.

The text is wont to half-apologize for these incredibly engaging mini-histories, but should not: its insights thrill. Such historical narratives are strongest during Evans's travels through Zimbabwe, a nation to which his family has connections. He both names colonial exploitations and critiques the officials who shook off outsiders for the ways in which they failed to hold extant economies together. So, too, does he marvel at landscapes, always with a sense of their regional rootedness: Victoria Falls may have become so because of outsiders, but in the text it is described in local terms, as Mosi-oa-Tunya, 'the smoke that thunders.' Such awareness makes the text all the more illuminating; here is a visitor who honors the places he lands holistically.

From the spectacle that is Burning Man to troubled Haiti, sights, sounds, and legal stimulants are all afforded due appreciation. Even places that appeal to travelers' spirits as a rule sound newly intriguing here. The greatest treasure of the book, though-beyond the sheer mileage that it covers and its ability to weave between very settled places and very remote ones-is its narrator's voice, which teems with good humor and unapologetic nerdiness. Tolkien references come more than once before smoking volcanoes, and a spider bite in a cave is remarked upon with the hope that the offender was radioactive. Evans chides himself for enjoying banana shakes on beaches too much, writes a satirical side essay as a coddled Western visitor who never experiences places far beyond the hotel, and sneaks into a seven-star UAE hotel just to comment upon its over-the-top golden ceilings and surprisingly delectable, $100+ hot and sour soup.

Whereas other by-foot, getting-there-the-hard-way travel writers tend to weave curmudgeonly tones into their work and find little joy in mishaps, Evans turns even treks gone awry into moments of levity, as when one of the most grueling climbs of his life results in-not much:

They say that from the top of Mount Wilhelm, on a clear day, you can see both the north and south coasts of Papua New Guinea. I cannot confirm this, but I can tell you that, weather permitting, you may see a lot of clouds.

Those who travel to guidebook places when he does, but only for photos, are remarked upon with amusement and some pity, of which the text reserves only a small measure for itself when naming the places that its own author misses.

You can't see it all, as Evans self-quotes. So much is certain in the text, and yet it treats the places that it does touch down in with such respect, bemusement, and hunger that it's impossible to end without feeling the bite of the travel bug-radioactive or not-yourself. No Fixed Address is a rare treat as a travelogue, managing to be thoughtful, hilarious, and inspiring all at once.