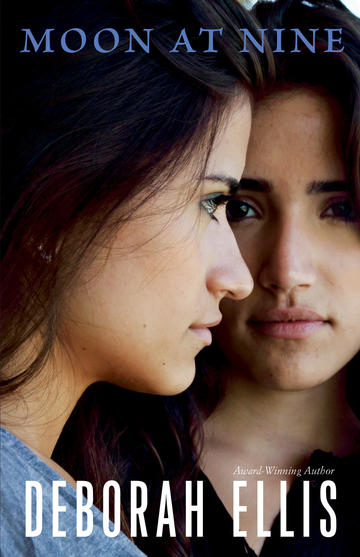 Based on interviews with a young woman forced to flee Iran because of her sexual orientation, Moon at Nine is a tense and riveting novel that shines a light on an issue of social injustice that continues to this day.

Fifteen-year-old Farrin has grown up with secrets: ten years after the overthrow of the Shah, her aristocratic mother is still working against Iran's conservative revolutionary government. But when Farrin befriends Sadira, the intriguing and outgoing new student at her school for gifted girls, her own new secret is even more dangerous. Because the girls discover their relationship is more than just a friendship—and in Iran, being gay is punishable by death.

DEBORAH ELLIS is the author of the international bestseller The Breadwinner, which has been published in twenty-five languages. She has won the Governor General’s Award, the Middle East Book Award, the Peter Pan Prize, the Jane Addams Children’s Book Award and the Vicky Metcalf Award. A recipient of the Order of Canada, Deborah has donated more than $2 million in royalties to organizations such as Canadian Women for Women in Afghanistan, Mental Health Without Borders, the UNHCR and the Children in Crisis fund of IBBY. She lives in Simcoe, Ontario.

Praise for Moon at Nine

STARRED REVIEW "Moon at Nine is a riveting tale of young girls being true to themselves and their love, set against a political and cultural backdrop few readers will have first-hand knowledge of. Ellis once again proves she is a master storyteller. Readers will remember Farrin and Sadira long after the final page has been read".—Quill & Quire Starred Review by Ken Setteringon, author of the Stonewall Honor Book Branded by the Pink Triangle

"Sparse and eloquently-written, this short historical novel is both beautiful and heartbreaking."—School Library Journal

"A firm grounding in Iranian history, along with the insight and empathy Ellis brings to the pain of those whose love is decreed to be immoral and unnatural, make this a smart, heartbreaking [novel.]"—Publishers Weekly

"In this riveting love story based on true events, Deborah Ellis transports readers to Iran in 1988 just nine years after the Islamic Revolution...Readers will find this powerful book both compelling and chilling."—Dragon Lode International Books

"As more and more states strike down anti-gay marriage laws, Moon at Nine is a chilling reminder of the suffering of too many others...its importance is hard to deny."—BookDragon, Smithsonian Asian Pacific American Center

"Deborah Ellis manages to avoid stepping on cultural taboos through rigorous research and editing, and her story hits on universal themes such as family secrets, friendships, relationships and coming-of-age...more than simply an LGTBQ novel or historical fiction...a multi-faceted hybrid that can be enjoyed by both teens and adults...It is powerfully grounded in the setting of Tehran, and depicts the beauty of falling in love and the cruelty and coldness of power in the hands of outside forces."—Ottawa Review of Books

"Basing her book on a true story, Ellis has written a heartbreaking tale of prejudice and injustice...Highly Recommended."—CM Magazine

"Moon at Nine is a tense and riveting YA novel."—The International Educator