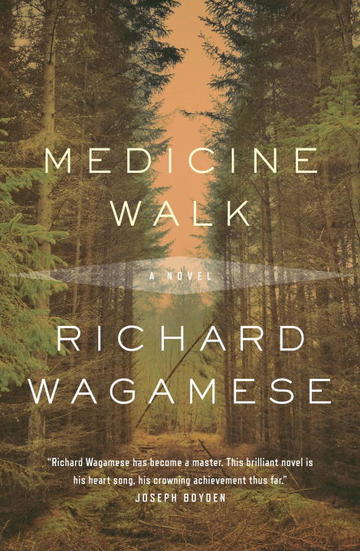 
By the celebrated author of Canada Reads Finalist Indian Horse, a stunning new novel that has all the timeless qualities of a classic, as it tells the universal story of a father/son struggle in a fresh, utterly memorable way, set in dramatic landscape of the BC Interior. For male and female readers equally, for readers of Joseph Boyden, Cormac McCarthy, Thomas King, Russell Banks and general literary.
Franklin Starlight is called to visit his father, Eldon. He's sixteen years old and has had the most fleeting of relationships with the man. The rare moments they've shared haunt and trouble Frank, but he answers the call, a son's duty to a father. He finds Eldon decimated after years of drinking, dying of liver failure in a small town flophouse. Eldon asks his son to take him into the mountains, so he may be buried in the traditional Ojibway manner.
What ensues is a journey through the rugged and beautiful backcountry, and a journey into the past, as the two men push forward to Eldon's end. From a poverty-stricken childhood, to the Korean War, and later the derelict houses of mill towns, Eldon relates both the desolate moments of his life and a time of redemption and love and in doing so offers Frank a history he has never known, the father he has never had, and a connection to himself he never expected.
A novel about love, friendship, courage, and the idea that the land has within it powers of healing, Medicine Walk reveals the ultimate goodness of its characters and offers a deeply moving and redemptive conclusion.
Wagamese's writing soars and his insight and compassion are matched by his gift of communicating these to the reader.

Richard Wagamese, an Ojibway from the Wabaseemoong First Nation in northwestern Ontario, was one of Canada's foremost writers. His acclaimed, bestselling novels included Indian Horse, which was a Canada Reads finalist, winner of the inaugural Burt Award for First Nations, Métis and Inuit Literature, and made into a feature film; and Medicine Walk. He was also the author of acclaimed memoirs, including For Joshua; One Native Life; and One Story, One Song, which won the George Ryga Award for Social Awareness in Literature; as well as a collection of personal reflections, Embers, which received the Bill Duthie Booksellers' Choice Award. He won numerous awards and recognition for his writing, including the National Aboriginal Achievement Award for Media and Communications, the Canada Council for the Arts Molson Prize, the Canada Reads People's Choice Award, and the Writers' Trust of Canada's Matt Cohen Award. Wagamese died on March 10, 2017, in Kamloops, BC.

RICHARD WAGAMESE is one of Canada's foremost writers. He's been a newspaper columnist and reporter, radio and television broadcaster and producer, documentary producer, and the author of twelve previous novels, including Keeper'n Me and Indian Horse which was a recent Canada Reads Finalist. He is also the author of acclaimed memoirs, including For Joshua; the bestselling One Native Life; and, One Story, One Song, which won the George Ryga Award for Social Awareness in Literature. He has won numerous awards and recognition for his writing. He leads writing and storytelling workshops across the country, and makes frequent appearances as a speaker. He lives in the mountains outside of Kamloops, B.C. The author lives in Kamloops, BC.

“With Medicine Walk, Richard Wagamese has become a master. This brilliant novel is his heart song, his crowning achievement thus far.” – Joseph Boyden

“In Medicine Walk, Wagamese manages the nuances of betrayal and redemption with uncommon artistry.  It is a breathtaking novel of sorrow, hope and polished steel.” – Thomas King

“A deeply felt and profoundly moving novel, written in the kind of sure, clear prose that brings to mind the work of the great North American masters; Steinbeck among them. But Wagamese's voice and vision are also completely his own, as is the important and powerful story he has to tell.” – Jane Urquhart

“Medicine Walk recounts the mythic journey of an estranged father and son who are searching for reconciliation and love. Richard Wagamese’s novel renders the Canadian wilderness with staggering insight and beauty.  The same can be said for his understanding of the fragility, wildness and resilience of the human heart. Magnificent.”  – Lisa Moore

“Medicine Walk is a masterpiece, a work of art that explores human interconnectedness with a level of artistry so superb that the personal becomes eternal.” – National Post

“A moving story…. Wagamese balances the novel’s spiritual and political subtexts with sly humour, sharp, believable dialogue and superb storytelling skills. Medicine Walk is a major accomplishment from an author who has become one of Canada’s best novelists.” – Toronto Star

“This is very much a novel about the role of stories in our lives, those we tell ourselves about ourselves and those we agree to live by…. Wagamese understands that the stories we don’t tell are as important as the ones we do….But Medicine Walk is also testament to the redemptive power of love and compassion.” – Globe and Mail

“One of the finest novels of the year…. Medicine Walk is not only a graceful book, it is a novel of grace, of coming to terms with hidden truths, of coming to know the secrets behind forbidding appearances, of finding the humanity within strangers.” – Vancouver Sun