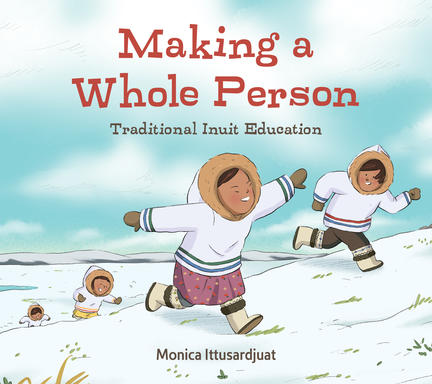 “Before schools were introduced to the Inuit, we were taught by our relatives.”

In this picture book, Monica Ittusardjuat shares how she learned knowledge and skills in a time before being taken to residential school. She describes how children learned through playing games, imitating grown-ups, and observing adults around them.

Monica Ittusardjuat was taken from her parents and sent to residential school at the age of seven, at a time when Inuit lived a subsistence way of life in winter camps and roamed around in spring and summer, following animals when they were plentiful. She went to three residential schools: Chesterfield Inlet, NWT (now Nunavut), for primary school, Churchill, Manitoba, for junior high, and St. Norbert, Manitoba, for high school. Monica graduated from McGill University in 1987. While teaching Community NTEP (Nunavut Teacher Education Program) in Nunavut, she earned her M.Ed. through the University of Prince Edward Island. She was the honour student for Baffin Island. She taught for many years in elementary schools, high schools, and teacher education programs, as well as in the Interpreter/Translator Program at Nunavut Arctic College. Monica tried to retire at the age of 60, but the habit of going to work was hard to break. She was the National Inuit Language Coordinator at Inuit Tapiriit Kanatami from 2016 to 2018 and is now Senior Inuktitut Editor at Inhabit Education, which she describes as her dream job.

Yong Ling Kang is an illustrator and avid comic book reader living in Toronto. She is inspired by simple, day-to-day experiences and her nostalgia of childhood. She suspects that her fondness of drawing may be caused by watching too many cartoons. Raised in tropical Singapore, she enjoys slow water sports and spicy food.

Other titles by Monica Ittusardjuat

If You're Happy and You Know It

Other titles by Yong Ling Kang

When I'm Too Excited (Inuktitut)

When I'm Too Excited (English)

Books About the Residential School System