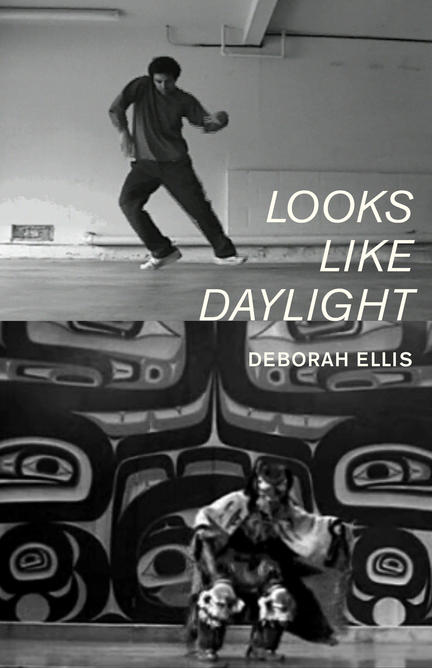 After her critically acclaimed books of interviews with Afghan, Iraqi, Israeli and Palestinian children, Deborah Ellis turns her attention closer to home. For two years she traveled across the United States and Canada interviewing Native children. The result is a compelling collection of interviews with children aged nine to eighteen. They come from all over the continent, from Iqaluit to Texas, Haida Gwaai to North Carolina, and their stories run the gamut — some heartbreaking; many others full of pride and hope.

You’ll meet Tingo, who has spent most of his young life living in foster homes and motels, and is now thriving after becoming involved with a Native Friendship Center; Myleka and Tulane, young artists in Utah; Eagleson, who started drinking at age twelve but now continues his family tradition working as a carver in Seattle; Nena, whose Seminole ancestors remained behind in Florida during the Indian Removals, and who is heading to New Mexico as winner of her local science fair; Isabella, who defines herself more as Native than American; Destiny, with a family history of alcoholism and suicide, who is now a writer and powwow dancer.

Many of these children are living with the legacy of the residential schools; many have lived through the cycle of foster care. Many others have found something in their roots that sustains them, have found their place in the arts, the sciences, athletics. Like all kids, they want to find something that engages them; something they love.

Deborah briefly introduces each child and then steps back, letting the kids speak directly to the reader, talking about their daily lives, about the things that interest them, and about how being Native has affected who they are and how they see the world.

As one reviewer has pointed out, Deborah Ellis gives children a voice that they may not otherwise have the opportunity to express so readily in the mainstream media. The voices in this book are as frank and varied as the children themselves.

Deborah Ellis is the internationally acclaimed author of more than twenty books for children, including The Breadwinner Trilogy; The Heaven Shop; Lunch With Lenin; Children of War: Voices of Iraqi Refugees; and Our Stories, Our Songs: African Children Talk About AIDS. She has won many national and international awards for her books, including the Governor General’s Award, the Vicky Metcalf Award, Sweden’s Peter Pan Prize, the Jane Addams Children’s Book Award, and the Children’s Africana Book Award Honor Book for Older Readers.Deborah knew she wanted to be a writer at the age of 11 or 12. Growing up in Paris, Ontario, she loved reading about big cities like New York. In high school, Deborah joined the Peace Movement, playing anti-Nuclear War movies at her school. Since then Deborah has become a peace activist, humanitarian and philanthropist, donating almost all of the royalties from her books to communities in need in Asia and Africa. Heavily involved with Women for Women in Afghanistan, Deborah has helped build women’s centers and schools, giving children education and finding work for women.In 2006, Deborah was named to the Order of Ontario. She now lives in Simcoe, Ontario.

[T]hese young people embrace their distinctive cultural practices and almost without exception, express a buoyant attitude. As gay Chippewa 16-year-old Zack puts it, 'They tried really hard to kill us all off, and we’re still here!'—a welcome and necessary reminder to all.

It’s heartening that so many of these young people are positive about their lives, no matter how troubled, and about their futures....Ellis’ book is an excellent opportunity for classroom discussion and individual, empathy-inducing reading.

Ellis’s transcriptions of these interviews allow the authentic voices of the young people to come through...Important and provocative, this is a good choice for libraries wanting to add a contemporary, youthful perspective on issues affecting indigenous people in North America.

[O]ften simultaneously heartbreaking and hopeful...Unflinching and informative, this volume will appeal to a broad range of readers.

Bulletin of the Center for Children's Books

Other titles by Deborah Ellis

The Breadwinner: A Graphic Novel