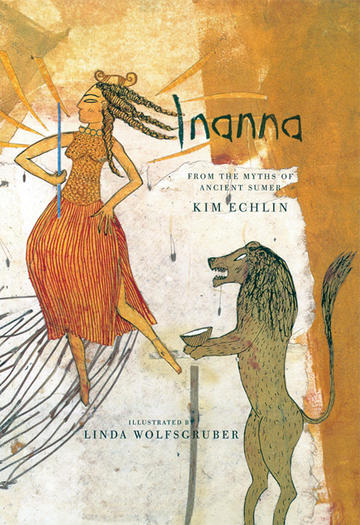 From the Myths of Ancient Sumer

Long before the Bible and the Koran, before the myths of the Greeks and Romans were set down, the people of Sumer (who lived in what is now Iraq) recorded the stories of their gods and kings on cuneiform tablets. The world's oldest epic poem is the Epic of Gilgamesh, the tale of a hero who was part god, part man.

But just in the past century a thrilling discovery was made -- the 4,000-year-old stories of his powerful sister, the goddess Inanna. Inanna is a goddess who embodies the quest for growth. Her stories tell how she develops from childish inexperience and youthful exuberance into maturity and gains the powers to create, to destroy and to name. The people of Sumer associated Inanna with the planet Venus -- radiant, changeable and mysterious.

With the guidance of Sumerian scholars, Kim Echlin has provided a moving, sensitive and knowledgeable translation of the Inanna myths. They describe an ancient goddess who was at once a great warrior, lover, nurturer, seeker of knowledge and giver of power -- a figure worthy of admiration by people of any age.

Linda Wolfsgruber is a world-renowned artist who has exhibited her work throughout Europe and in the United States and Japan. She has won many awards, including the Austrian Children's and Juvenile Book Award for Illustration (four times) and the Golden Apple of the Biennial of Illustration Bratislava. Visit Linda Wolfsgruber's website: http://www.lindawolfsgruber.at/
Author profile page >
Contributor Notes

Kim Echlin has been a documentary-maker, editor and teacher. Her adaptation of the Inanna stories is the result of looking for an ideal myth to tell to her own daughters. Echlin was drawn to this goddess from ancient Sumer because of her strength and sense of adventure, her daring and her final wisdom. Kim Echlin's publications include Inanna (Groundwood Books), Dagmar's Daughter (Viking), Elephant Winter (Viking) and The Disappeared (Penguin). She has been awarded the Torgi Award, and was nominated for the Chapters/Books in Canada First Novel Award, the National Magazine Award and the Scotiabank Giller Prize.Linda Wolfsgruber is a world-renowned artist who has exhibited her work throughout Europe and in the United States and Japan. She has won many awards, including the Austrian Children's and Juvenile Book Award for Illustration (four times) and the Golden Apple of the Biennial of Illustration Bratislava, and she has been nominated for the Hans Christian Andersen Award. Her striking illustrations appear in many books, including Inanna: From the Myths of Ancient Sumer, Stories from the Life of Jesus, Brunhilda and the Ring and A daisy is a daisy is a daisy. She lives in Vienna.