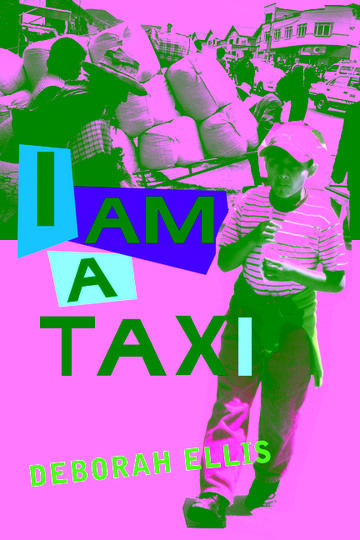 I Am a Taxi

Winner of the Ruth and Sylvia Schwartz Children's Book Award

For twelve-year-old Diego and his family, home is a prison in Cochabamba, Bolivia. His parents farmed coca, a traditional Bolivian medicinal plant, until they got caught in the middle of the government's war on drugs and were mistakenly convicted of drug possession.

Diego's parents are locked up, but he can come and go: to school, to the market to sell his mother's handknitted goods, and to work as a "taxi," running errands for other prisoners. But then his little sister temporarily runs off while under his watch, earning his mother a heavy fine. The debt and dawning realization of his hopeless situation make him vulnerable to his friend Mando's plan to make big money, fast.

Soon, Diego is deep in the jungle, working as a virtual slave in an illegal cocaine operation. As his situation becomes more and more dangerous, he knows he must take a terrible risk if he ever wants to see his family again.

About the Author
Deborah Ellis is the internationally acclaimed author of a number of award-winning titles for children, including the Breadwinner trilogy, A Company of Fools, The Heaven Shop, and Our Stories, Our Songs. A peace activist and humanitarian field worker, Deborah has traveled the world to meet with and hear the stories of children marginalized by poverty, war, and illness.
Author profile page >
Contributor Notes

DEBORAH ELLIS is the author of more than two dozen books, including The Breadwinner, which has been published in twenty-five languages and was recently adapted into a feature-length animated film and a graphic novel. She has won the Governor General’s Literary Award, the Middle East Book Award, the Peter Pan Prize, the Jane Addams Children’s Book Award and the Vicky Metcalf Award for a Body of Work. She has received the Ontario Library Association’s President’s Award for Exceptional Achievement, and she has been named to the Order of Canada. She has donated almost $2 million in royalties to organizations such as Women for Women in Afghanistan, UNICEF and Street Kids International.

Vivid details and a thrilling plot will keep older children and teens engaged in this highly-accessible, realistic novel.

Ellis makes a strong and informative case for protecting and honoring coca as an important medicinal and cash crop for the Bolivian farmers while strongly condemning the cocaine trade; as usual, her case is made with compelling characters and riveting action rather than through didactic intrusions.

— Bulletin of the Center for Children's Books

I Am a Taxi is uncompromisingly gritty and graphic, painting a devastatingly accurate portrait of life for kids (and their parents) in the Third World....a good story, well told, with a compelling plot and fully realized characters, that will captivate readers.

Deborah Ellis's latest glimpse into another culture is a valuable addition to her oeuvre.

Once again, Deborah Ellis takes us into the harsh realities of a developing country...[The story] is told in a stark, realistic manner and shows a way of life which is almost impossible for most children in Canada to imagine. I Am a Taxi will be enjoyed by male and female readers in the intermediate grades and I'm sure they will enthusiastically await the sequel...to find out what new adventures await Diego.

...Ellis exposes her North American readers to the harsh lives being experienced by children and youths who live in developing countries...Highly Recommended.

This is not your usual teen storyline....an excellent story that will appeal to any readers who feel trapped by their lives....The characters are well-drawn and realistic.

This book should be in junior and senior high school libraries. The story is gripping, well written, and informative. It will attract reluctant readers and still please those who read more widely.

Readers will be caught up by the nonstop action in the prison, and also in jungle survival adventure, where escape is peppered by the specter of death.

Ellis artfully describes the horrible conditions in the overcrowded prison, the street children who sniff glue, and the backbreaking labor-often performed by children-to make the paste that will eventually become crack cocaine...Readers can look forward to a sequel.

...the strength of the book lies in the glimpse of a single individual struggling to exist in a society with limited options for escape.

...because of its unusual setting and subject matter, and Ellis's efforts to explicate complex social, political, and economic issues, this book should find a place in larger collections.