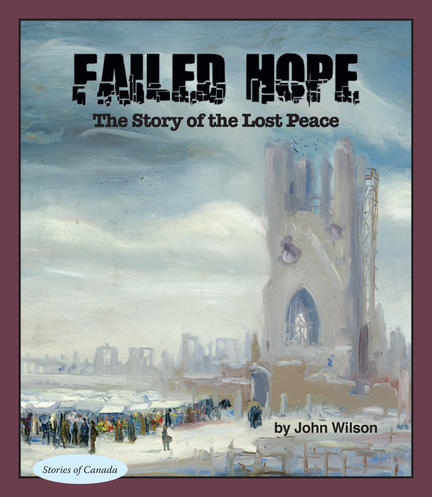 Peace after the First World War inspires hope for a better life that’s crushed by the advent of the Second World War.

Beginning with the Treaty of Versailles and the hope for the birth of a better world, Failed Hope follows the postwar rise of fascism, social unrest, Prohibition, the Great Depression, Adolf Hitler’s rise to power, and the wars in Abyssinia, Spain, and China. The general strike in Winnipeg provides a Canadian perspective to the global labour turmoil of the period. The book ends with the failure of appeasement and the outbreak of the Second World War.

Failed Hope links with John Wilson’s two previous books, Desperate Glory and Bitter Ashes, covering the history of the 20th century from 1914 to 1945 and the effects of its world wars.

John Wilson was born in 1951 in Edinburgh, Scotland. He did his early growing up on the Island of Skye and in Paisley, near Glasgow. From 1969 to 1974, he attended the University of St. Andrews where he took an Honours B.Sc.. in Geology and never played golf once. He took a position with the Geological Survey of Rhodesia (Zimbabwe). In his two years there, he mapped rocks, dodged land mines and watched the country sink ever deeper into civil war. Shortly before he was due to be called into the army, John retreated back to Britain on his way to the safety of Canada. He settled on Calgary where geology was booming and the only danger was freezing to death in January. In 1979, he moved to Edmonton to take up a post with the Alberta Geological Survey. In 1988 he sold a feature article to the Globe and Mail. This fueled a smouldering mid-life crisis and he took up freelance writing full-time. With some success, John mined the experiences of his travels for articles, journalism and photo essays. He even began to express himself poetically and, with a young family, began writing children's stories. He moved to Nanaimo and then Lantzville on Vancouver Island. John has been widely published by a number of Canadian presses, with his acolades including a shortlisting for the Governor General’s Award.

Other titles by John Wilson

The Flags of War

Flames of the Tiger