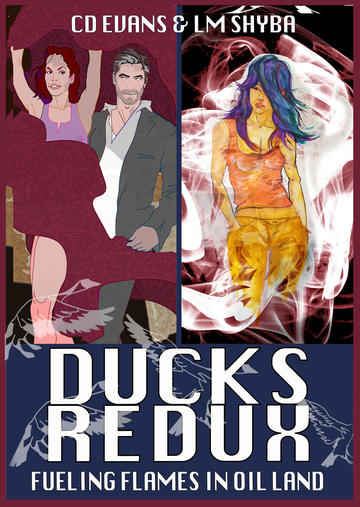 Maeve Wong, a young environmental scientist goes to work for Real Rush Energy to pay off student loans. In order to help them push through their Freedom North Pipeline, she gets tangled up with a group of conniving lawyers who want to take over the government. Love affairs ensue and she needs to choose who to follow with her passion, an environmental adtivist, or an oil man.

Keep your cool, keep cool, stay cool, don’t die here Maeve snarls to herself as she weaves her battered pickup through a convoy of semis on Deerbound Trail. She drove all night from work camp at Tailings Pond and the morning sun bites at her eyes as tries to focus on the road through the bugs. She’s at the end her dash for the Real Rush Energy head office in downtown Oil Land. Cool, stay cool. Words tumble in her head. Dead flippin’ ducks. I get blamed. Right!? I go down for this? JB’s gonna be an angry pitbull with big jaws snapping. Snap me like a twig. Gravel rakes her windshield hard from the bare wheel well of a jacked up Tundra. Or will my crisis training kick in and help me out? She hopes the latter but fears the first. Dead ducks lying dead in Tailings Pond, what a disaster. Her truck’s undercarriage makes a terrible rattle, must have hit a rabbit or something on the way down. Over the roar of the traffic, and the tumble of big jaw, snapping like a twig snapping, in her head, Maeve steadies herself with a breath. She punches at her jerry-rigged onboard Bluetooth and yells out, “Dial Real Rush. Harold Jones.” Harry picks up her call right away. “Maeve, ah—?” He has no time to answer back when Maeve shouts, “No way those alarm horns could have scared that flock off, Harry forget it. Couldn’t get ’em set up fast enough anyway. Duck corpses everywhere.” She swerves into the diamond lane to pass a tourist trailer of obscene length.“Yeah, flocks and insane flocks of ’em … banked and landed right on top of our Pond 13, what a cesspool … what were we supposed to do? Flap our arms around at ’em and pray? God knows we tried. What a disaster.” A merge moves her out onto the final Memorial Trail to town. “What?? You knows about it already. How did you find out? ... What station? ... You tell Mailcoat yet? … Give me five minutes, I’ll be right there.” Maeve tears off her headset and slaps down the sun visor, grabbing at the same time for her aviator glasses and poking out one of the lenses in the process. She drives head on into the flaming sun toward downtown Oil Land, squinting with one eye. She has a pretty good idea that Harry will give JB the heads up about the dead ducks. Not a great way to start a meeting. Her breath sharpens into a rasp and she catches herself groaning in gasps and moans. Breathe, steady yourself. She punches at her playlist, takes a big breathe and sings along to a song about calming down and not being so loud. Fat chance she can follow that advice. It took three months with Read Rush to get that Lucas was right all along. — that she’s selling out. She’d told him, “I’ll do a great job at Tailings Pond, then you’ll see. I’ll dazzle JB Mailcoat and his Real Rush cronies with renewable energy experiments we’ve been testing, you’ll see.” Lucas said without a trace of empathy, “You’re kidding, right? He’ll eat you alive.” When she accepted the job, Maeve thought she’d be working in the solar testing lab but instead, JB assigned her to chase wildlife away from Tailings Pond. The dazzling presentation she’d planned was likely today to turn into don’t fire me, I have to pay my student loans. Nothing I could do to keep those ducks off the toxic water. Don’t you believe me? As she heads toward the inevitable crunch with JB Mailcoat and his snapping jaws at Real Rush’s head office, she drives and chants, keep your cool, Maeve. Pull yourself together. Do not be afraid.

At the same time, JB Mailcoat, President and CEO of Real Rush Energy, cracks his morning cola and kicks his scuffed cowboy boots up on the shiny walnut desk. He surveys the corporate landscape of Oil Land and the shining mountains that stretch beyond the walls of his glass palace on the 38th floor of the Real Rush Building. As he sucks an errant morsel of breakfast steak from between his teeth, he reflects on how much easier life would be if there was a big ocean out there, dotted with oil tankers instead of peaky mountains and stacks of unused pipeline. JB pries his thousand-mile stare off the sweeping horizon and swings his long legs up and away from the top of the desk and onto the floor with a thud. A flurry of dog whines and scratches from a nest under his hobby table in the corner of the room prompts him to hurl a big rawhide bone in the direction of his black lab Lucky, who jumps out at it from across the Persian rug with a rip and a salivating snort. JB reaches out to scratch Lucky behind the ear, drawling out “Who needs a harbor, Daddy needs a harbor,” but a rap at the door provokes barking and lunging that knocks JB off balance, upsetting both his train of thought about needing harbors and the pile of coins he had stacked up on the corner of his desk. A muffled voice from behind the big oak door says, “Excuse me, Mr. Mailcoat … twenty-five hundred dead ducks ... Tailings Pond—” JB, momentarily distanced from his aura of command, slides around on a sea of collapsed coinage as he grabs Lucky’s collar in one swift movement. Harold Jones opens the door a crack, saying, “we may be facing a disaster.” “Whaddya mean, a disaster?” “That’s what she said, JB. I’m only repeating what Dr. Wong—” “Listen, Harry!” JB strides across the room, points a square finger and yells out. “Chernobyl was a disaster. Katrina was a disaster. Fifty rigs out about five hundred days hittin’ fifty dry holes, that’s gettin’ up there. Who is this Dr. Wong anyway, calling this a disaster. This ain’t nothin.’ Dead ducks ain’t even on the radar.” As he punches at the television remote, Harold answers, “Yeah, I’m with you, JB.” The channels flip from the twangy country music channel to JB’s default favourites: the Fishing Network, ESPN, and Fox News. He looks up to see JB scowling. “You’re pushing on an open door, JB, on a scale of one to ten, dead ducks is a minus one hundred and ninety-three.” Harry, besides being a pretty good slide guitarist and a native Oil Lander, is a world class suckhole. “Okay,” he sighs, “Here’s the coverage.” The screen springs to life with images of dead and dying ducks and a news ticker that proclaims AntiTox’s discovery of a catastrophe of dead and dying ducks. JB, true to his hard-stubble cow ranching and oil patch roots of Okadoka, swings into crisis mode. “So what are you people doin’ about these ducks. Tell me. Right Now!”

Maeve is glad to be getting out of JB’s office, but the warm glow that has flushed her face catches her totally by surprise. What was JB’s look all about? I hate guys like Mailcoat with their right-wing values and beer bellies so what do I see in that look? Is he looking at me like a lover? That would be so MeToo weird. Is he thinking he’s like my dad? Is he just curious, never met a FarEaster? Is there a booger in of my nose? She discretely checks her nose, no booger. A blonde executive assistant with fake eyelashes like butterflies looks up from her phone and passes along JB’s pass codes saying, “Gym’s down the hall and if you want some clean clothes, there’s some in a basket marked ‘Tricia’ above the water cooler.” Maeve computes what she’s heard but her main thoughts spring back to her truck’s blinking hazard lights out front of the Real Rush Building and how her battery is due to die any minute. “Parking garage?” she asks Tricia. “Easy,” was the answer. “Just key in L-U-C-K-Y.” She joins JB’s other sentries as they field phone calls pouring in as dead ducks hit tlevision and social media all over Oil Land and beyond. Maeve sheds greasy mud clumps as she races across the lobby and out the front doors to save her truck’s battery from certain death by hazard light. The old Pathfinder grinds a bit to get started, and the exhaust makes a new kind of racket she hasn’t heard before. She mumbles Better get someone to look at that muffler. Maeve winds a way down to executive parking, enters the L-U-C-K-Y code and pulls up beside the fleet of Real Rush 4 x 4 Suburbans and lanky Mercedes. She kicks her muddy steel-toes boots into the passenger wheel well and for the second time in less than an hour, catches the elevator up to the 38th Floor, this time in her sock feet. As she closes her eyes, the scene from JB Mailcoat’s office comes flooding in. Why did he look at me like that? Does he like me like a daughter? Or a new flame? He’s old enough to be my dad. Ding. 14th Floor. I didn’t even have a chance to talk to him about renewables instead of always oil, oil, oil. Will I ever? Ding. 25th Floor. Will he ever call me Maeve or should I just be The Kid to him forever. Ding. 31th Floor. Is Lucas still in at Tailings Pond with AntiTox? Will he ever even speak to me again after what I have done — Ding.