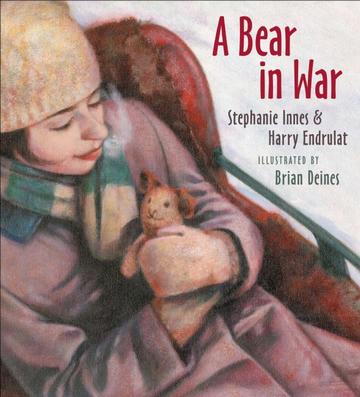 A Bear in War

Shortlisted for the 2010 Silver Birch Award

In 1916, at the height of the First World War, a Canadian teddy bear travelled all the way to France in a care package destined for Lawrence Browning Rogers--a gift from his ten-year-old daughter, Aileen. When Teddy returned from the front lines, more than a year later, he did so alone: Lieutenant Rogers, along with many other Canadian soldiers, died at the battle of Passchendaele.
Today, Teddy resides in a glass display case at the Canadian War Museum--one of the most beloved exhibits in the building. Small and brown and nothing at all like a modern stuffed bear, Teddy has an amazing story to tell. In 2002 Lawrence's granddaughter, Roberta Rogers Innes, found Teddy, the letters and other war memorabilia inside a large family briefcase. As she delved deeper, Roberta discovered how a Canadian family's strength was tested during the First World War and how a tiny bear became an enduring memento of their love.
Now, in A Bear in War, Stephanie Innes (Roberta's daughter) and Harry Endrulat share Teddy's remarkable story--from his life in East Farnham, Quebec, and his voyage overseas to his eventual journey home. Each chapter in Teddy's tale is brought to life through Brian Deines' poignant art. The result is a powerful, moving piece of literature--a picture book destined to become a Canadian classic.

Stephanie Innes is the great-granddaughter of Lawrence Browning Rogers. She lives in Tucson, Arizona, where she is the medical reporter for the Arizona Daily Star, as well as an adjunct instructor of journalism at the University of Arizona.

Writer and editor Harry Endrulat is the coauthor of A Bear in War, which was an honour book for both the OLA Silver Birch Express Award and the Children’s Literature Round­tables of Canada Information Book Award, as well as its sequel, Bear on the Homefront. Among others, he has also written numerous books for the Max & Ruby series and The Adventures of Franklin and Friends collection. Harry lives with his family in Southern Ontario.

Brian Deines is a fine artist and the illustrator of Bear on the Train. He lives in Toronto, Ontario.
Author profile page >
Recommended Age and Grade