On the fiction side of things: 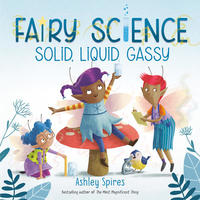 Solid, Liquid, Gassy: A Fairy Science Story, by Ashley Spires, is a delightful picture book featuring Esther, a different kind of fairy who chooses to adhere to scientific fact over magic. This book teaches not only the water cycle, but also the scientific process. When the local pond dries up, Esther leads her fellow fairies on a hunt for evidence as to what's happened—ending with a dramatic rain shower of the pond’s evaporated water. At the culminating Science Fair, she convinces some of her friends to continue pursuits in the scientific world. (Kindergarten to Grade 3) 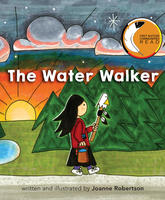 The Water Walker, by Joanne Robertson, is the story of Nikomis, an elder who goes through “three knees and eleven pairs of sneakers walking for Nibi (water).” Nikomis and other Mother Earth Water Walkers sing and pray in the four cardinal directions and still nothing changes. It’s based on the true story of Josephine Mandamin, a First Nations elder who walked over 27200 km around the Great Lakes to raise awareness that one day “water will cost as much as gold.”  It’s a dismaying story, punctuated with Ojibwe vocabulary, but ultimately inspiring as it leaves the reader with a question: “What are you going to do about it?” (Grade 1 and up) 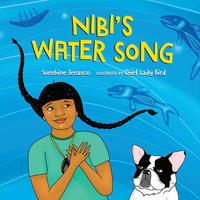 Nibi's Water Song, by Sunshine Tenasco, illustrated by Chief Lady Bird, shows Nibi, after drinking dirty water, travelling to "big shiny houses," asking for water. These neighbours give her a little, then stop answering their doors. After the hunt for clean water, she organizes a protest with signs that say: "Water is life" and "I am thirsty," which gets some results. The author’s note talks about Canada’s inequitable practices in terms of access to clean water. (Kindergarten to Grade 3) 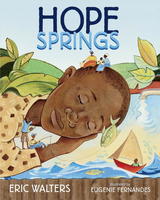 Hope Springs, by Eric Walters, illustrated by Eugenie Fernandes, is based on a true  story of a Kenyan boy named Boniface, who went to collect water at the spring and was turned away because he was an orphan. When the orphanage builds a well, it’s Boniface who rallies everyone to help build a well for the very villagers who rejected him. An Afterword reveals photos of the real life characters the book is based on. The amount of text makes this a good one for Grade 2 and up. 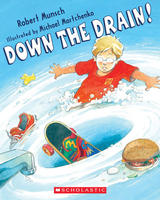 Down the Drain, by Robert Munsch, is a fun tale of a boy who overflows the tub, filling the entire bathroom with water. Dad asks him to pull the plug, but Adam demands a skateboard, new shoes and some burgers, which his father immediately buys and throws into the water-filled room. Everything is sucked down the drain, including Adam, trapping him with all the "gloopy, grimy, GLOP." When he finally climbs out of the drain, he is filthy enough for a bath! (Kindergarten to Grade 3) 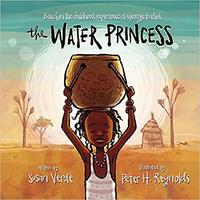 golden-brown illustrations in The Water Princess, Susan Verde, illustrated by Peter H. Reynolds, reflect the dust and sun of the African savannah. Gie-Gie wakes to another morning of dry weather, hoping she doesn’t have to make the day-long trek for water to drink, cook and bathe. She does so with her mama, stopping halfway for some nuts from the karite tree before joining the line at the well. She plays with friends until their turn to collect the brown water that needs filtering. She dreams of a day when she doesn’t have to do this. The postscript tells the true story of Georgie Badiel, an African model, who, as a child, walked miles every day to collect water with her family, and as an adult, helped create a water source in her village. (Kindergarten to Grade 6)

On the nonfiction side: 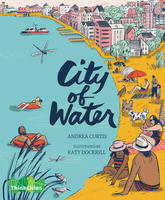 City of Water, by Andrea Curtis, illustrated by Katy Dockrill, is a straightforward, Canadian-focused read, beginning with the history of water. Topics include: aqueducts, watershed, aquifers, groundwater, and how water systems have evolved in terms of reservoirs, filtration processes and water towers. Canadian facts (the average Canadian uses about 700 glasses worth of water a day!) and issues (First Nations communities’ struggle with contaminated water) are addressed, as well as why water tastes differently in different cities/places, and how sewers and the water cycle work. Each 2-page spread explains one aspect of water in 4-5 paragraphs, accompanied by a large sketch. (Grade 4-6) 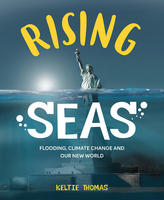 Rising Seas, Flooding, Climate Change and Our New World, by Keltie Thomas, with art by Belle Wuthrich and Kath Boake W., tackles the effects of climate change on water. Each page highlights a different place on the planet, beginning with the most vulnerable…Miami, New Orleans, New York City. There is a futuristic rendition of what the city might look like flooded, alongside a map and a recap of the present situation, punctuated with interesting kid facts such as: scientists think the Titanic was sunk by a broken piece of iceberg from Greenland; researchers deposited 90 rubber ducks into the Greenland glacier to find out how glaciers melt into the sea, but so far, only 2 ducks have resurfaced; the former president of The Maldives held a cabinet meeting underwater to draw attention to their water crisis. (Gr 4-6)

These next two, part of the Orca Footprints series, follow the same format, providing a first person point of view. 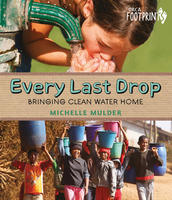 Every Last Drop, Bringing Clean Water Home, by Michelle Mulder, begins with the author’s near-death experience ingesting dirty water in Peru. The book draws you in with: “Imagine…your family moves…what would you look for in a new place?” Thousands of years ago, you would have looked for a nearby water source. Imagine you wake up hungry, Mulder goes on to say, and you need to follow your food, until finally you figure out how to "help nature a bit" by clearing a patch of ground to grow your own. You then figure out how to divert water to grow your crops. Mulder writes about the history of water-harvesting technologies, how to keep sewage separate from drinking, types of pumps, including a kids’ playground seesaw. Also explained are fog nets, desalinated water, natural filtration systems, planting trees to prevent erosion, and converting dry earth converted to fertile soil. (Grade 3-6) 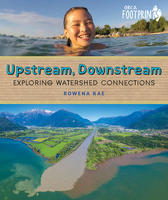 Upstream, Downstream, Exploring Watershed Connections, by Rowena Rae, begins with the author saying, if you ask for her address, she’ll tell you her watershed address. It’s important to know where your water comes from, your local source, Rae writes. Photos, facts and narratives explain what a watershed is and the history of water usage. Specific watershed projects are featured, as well as folks fighting to help the watershed, including Josephine Mandarin, the woman portrayed in The Water Walker, the fiction title mentioned above. Some tips for helping are at the end of the book. (Grade 3-6) 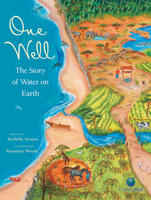 One Well, The Story of Water on Earth, by Rochelle Strauss, illustrated by Rosemary Woods, emphasizes the concept of water as a shared resource. “The water you brushed your teeth with today may have been the spray of a beluga whale ten years ago.” Each page, supported by a handful of facts, presents a specific concept including the water cycle, where water is located on the planet, animals’ and plants’ relationship with water (“On a summer’s day, an average-sized birch tree can draw…enough water to fill two large bathtubs.”), freshwater vs. salt water (“While there is a lot of water on the planet, we have access to less than 1% of it,”), pollution and how “everything you see was made using water.” Water-friendly tips for kids and grownups are found at the back. (Grade 4-6) 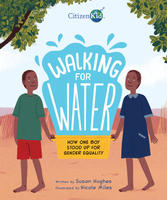 Walking for Water, How One Boy Stood Up For Gender Equality, by Susan Hughes, illustrated by Nicole Miles, features Victor and his twin sister, Linesi, living the same day in two very different ways. Victor goes to school to learn math and play soccer while his sister spends the day collecting water and doing chores. One day Victor’s teacher introduces the topic of equality, and Victor begins to see he and the other boys have choices, whereas his sister does not. After unsuccessfully trying to teach Linesi math, he decides to switch places for a day—doing chores while Linesi goes off to school. This ignites a change in other siblings in the village. The Author’s Note tells the origins of the story about a 13 year old boy in Malawi, where, although there is plenty of freshwater in Malawi, much of it is undrinkable. (Kindergarten to Grade 6)