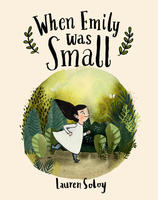 When Emily Was Small, by Lauren Soloy, involves an encounter between Small (young Emily Carr) and Wild (a wolf). It’s about a girl who immerses herself in nature long enough to discover its secrets. This book has lovely sound words; for instance, Emily adores "the glitter-glammer" beneath the translucent skin of white currants. She crawls into the forest, listening to all it has to say. There she finds peace, and meets Wild, who tells her, "You are bigger than you know." Together they fly like seeds, noticing a thousand shades of green, until her mother calls her back to the world where she feels small, again. A postscript connects the story to Carr’s real-life struggle to feel recognized. 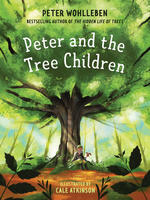 Peter and the Tree Children, by Peter Wohlleben, illustrated by Cale Atkinson, begins with a note telling us the author lives in a protected German forest and that the character Piet is based on a real squirrel. In the story, Peter, the forester, tells Piet that the trees have children and so they set off to find them, encountering creatures and learning about clear-cut forests. They meet Peter’s friend whose work horse is dragging a log; the horse doesn’t make a deep mark on the earth, and Peter tells the squirrel, "Without machines, the earth stays soft and loose." They come upon a machine that "has packed the soil down so much that little trees can’t grow in it." Upon finding some tree saplings (tree children), Piet realizes they’re the result of the beechnuts he planted last fall.

This story is all about the connection between humans and nature. There’s a wonderful postscript in kid-friendly language, entitled, "More About Trees and Their Families." 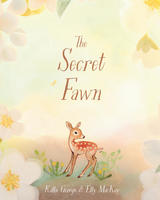 The Secret Fawn, by Kallie George, illustrated by Elly MacKay, is about a girl who, through listening, finds a kindred spirit in nature. The story is full of sound words like "crick-crack" (a bird rustling in the trees.) The little girl wakes up to her family saying they’ve seen a deer. She’s missed it, just like she misses the shooting stars at night because she goes to bed earlier than her sister, or the apples she can’t yet reach to pick. MacKay’s beautiful paper collages show the softness of the forest as the little girl searches for the deer. Instead, she discovers its fawn, and a feeling of her own place in nature. They say hello with their eyes, before both running back to their mamas. 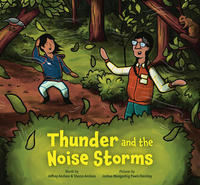 Thunder and the Noise Storms, by Jeffrey Ansloos and Shezza Ansloos, illustrated by Joshua Mangeshig Pawis-Steckley, is about an Indigenous child with a sensitivity to noise—the traffic and chaos of the school bus ride, the schoolroom chatter and scraping chairs, the music class sounds, the knocked-over water bottles and bouncing basketballs in gym. It makes her grumpy and isolates her from her school chums. But her mosom (grandpa) teaches her the word "mamaskasitawew," which means "listen with wonder." As they walk together, they hear squirrels, birds, sweetgrass—all speaking. This is another book filled with great sound words; her mosom teaches her to listen to the badoom badoom of her heart, to calm the storm. 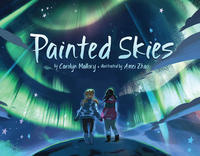 Each page of Painted Skies, by Carolyn Mallory, illustrated by Amei Zhao, replicates the palette  of a night sky filled with Northern Lights. The story encapsulates the experience of two girls—Leslie, who has moved to the North recently and Oolipika, the indigenous character who teaches Leslie the legend of her ancestors playing soccer in the sky using a giant walrus skull for a ball. Whistling brings the spirits closer, she tells the fearful Leslie: "The ball might hit you in the head." Clicking fingernails tell them to stay away. There is a helpful postscript—"What are the northern lights?"—explaining the science of the phenomenon. 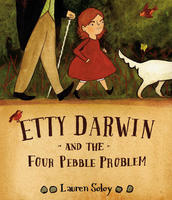 Etty Darwin and the Four Pebble Problem, by Lauren Soloy, portrays Charles Darwin in conversation with his daughter as they stroll around a "thinking path" carved by Darwin for his twice daily walks. They lay out four pebbles to keep track of the number of laps as they ponder Etty’s question: are fairies real? "Most living things leave evidence, if you know what to look for," says her father, showing her how to find foxes and butterflies. Etty reminds her father, "You can’t disprove fairies don’t exist." Her questions lead to more questions, bringing home the message to keep an open mind.

"Being under the trees and the sky gave Etty’s thoughts space to fly." An afterword tells a little about Darwin and his life and family.