The “Warnings to the Future Me” provides hints and a “Prank Review" asks a few reflective questions—i.e. What did you learn and how might this apply to other situations?

The following titles are about fictional tricks and hoaxes. 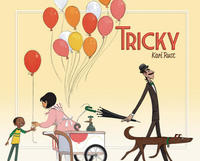 Tricky, by Kari Rust, shows that scamming people doesn’t always payoff. Tricky is a mischievous character, with a sneaky silhouette in bowler hat and black suit, always accompanied by his faithful accomplice, Duke the dog. When Duke has a change of heart, the only way out of the dysfunctional relationship is by bamboozling his master.

Coyote Tales, by Thomas King, illustrated by Byron Eggenschwiler, contains two stories involving a tricksters. In "Coyote Sings to the Moon," the moon has run away, thanks to Coyote’s insults. Humour abounds as Old Woman hoodwinks Coyote into using his horrific voice to get the world out of darkness. In the second tale Raven creates a ruse, using Coyote as the dupe. By orchestrating a showdown between humans (decked out in animal skins) and animals (dressed in human clothes lifted from a clothesline), Raven makes sure Coyote takes all the blame. 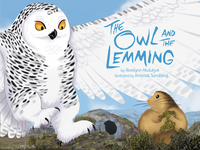 The Owl and the Lemming, by Roselynn Akulukjuk, illustrated by Amanda Sandland, is an Arctic tale about a lemming foraging for food when an owl blocks her den entrance. After several failed attempts to deceive the young owl, the lemming tricks him into a jumping challenge, and with the bird’s talons out of reach, the lemming runs to safety. The ending shows sad Owl being comforted by his father: “Next time, don’t play with your food.”

Bone Button Borscht, by Aubrey Davis, illustrated by Dusan Petricic, begins with a beggar wandering into a dark town. A solitary light leads to the synagogue, where the caretaker pays him little attention. The beggar fools him into believing he can make borscht out of his bone buttons, and that a miracle can happen if the townsfolk provide a few things. As people gather to see the miracle, they inadvertently add the necessary ingredients to make the borscht to feed their hungry bellies. 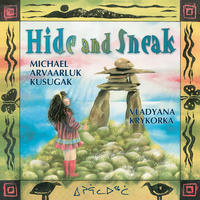 Hide and Sneak, by Michael Arvaarluk Kusugak, also set in the north, is a cautionary tale for kids to stay close to home. Allashua gets lost in the natural wonders of the tundra. She meets an Ijiraq, a tiny man with a ptarmigan feather coat and bare feet, who tricks her into a game of hide and seek and leads her to a cave. Allashua is hungry and homesick, and discovers that insulting the Ijiiraq is her way out.

No More Pranks, by Monique Polak, is a short novel. When Pete calls into a “Pillow Talk” radio show, pretending to be his school Vice Principal with a foot fetish, he gets suspended. His parents have had enough of his practical jokes so they force him to spend the summer in Tadoussac working at his uncle’s kayaking/whale-watching business. Pete attempts another antic—a frog in a customer’s life jacket but his uncle sets him straight. An injured humpback stuck on shore requires Pete and his new friend, Rosalie, to play one final prank to help the whale. This one is for Grade 6 and up—there’s mention of a condom and someone being tipsy.