(We've got up for grabs right now! Don't miss your chance to win.) 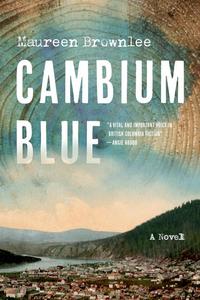 British Columbia has a wonky, diagonal north/south borderline that falls somewhere between longitudes of 115° in the south and 120° in the north. Near Beauty Creek (the fictional setting of Cambium Blue) it's 119°. Since this geography moulded the novel (and me) as much as my lifetime of reading, I have built my list around BC books/writers. When I'm working on a novel (and when I'm not) I read a lot of nonfiction but novels are my first love, so I am always all over the place with books.

I plucked these titles from my shelves because they have shaped either my writing life and practice, or my understanding of this diverse place I call home, or both.

Hundreds and Thousands: The Journals of an Artist, by Emily Carr

I've been reading this book for more than 20 years—most often when I am discouraged. There is something about her incessant grumbling about the housework, the pets, the sisters, the weather, the critics, and the public that comforts me when I feel overwhelmed by my to-do list. It reminds me that quite a lot of daily tedium (p. 170 “Life’s hideous just now…” ) co-exists with the joy of creating (p. 261 “I painted well today.” ).

This writing, this novel, exploded my idea of what story can be, what it can look like, how it can be crafted, how it can be informed by history. I don’t know that I completely understand it yet, but I know it pushes me to try harder, to go deeper, to be more truthful about the complexity and . . . mess . . . that a character contains.

At the Bridge: James Teit and an Anthropology of Belonging, by Wendy Wickwire

Gripping BC nonfiction. I devoured it. From UBC Press (they encapsulate it much better than I could): "Every once in a while, an important historical figure makes an appearance, makes a difference, and then disappears from the public record. James Teit (1864–1922) was such a figure. A prolific ethnographer and tireless Indian rights activist, Teit spent four decades helping British Columbia’s Indigenous peoples in their challenge of the settler-colonial assault on their lives and territories."

Runaway: Diary of a Street Kid, by Evelyn Lau

I come to some books late (so many books, so little time) and hadn’t read this breathtaking narrative of a teenager on the Vancouver streets until a few years ago. Written in 1989, from her journals, it is an unflinching and honest first-person account of trauma and resilience. I probably over-identify because I, too, was a precocious teenager who left home early (though not to the streets).

This Ragged Place, by Terry Glavin

It should have been on my bookshelf but it was not! Which means I pressed it into someone's hand saying: "You've got to read this." If it was you, please bring it back. A collection of essays about the British Columbia I know, the people and places north of the Port Mann bridge, in all their complicated and contradictory turmoil and confusion. At least that's how I remember it.

Before the Trickster trilogy (which I also love) there was this fantastic novel about a sister navigating the disappearance of her beloved brother. Like the Trickster novels it is full of the other-worldly but what I most love about it is the way that it weaves in/through the ordinary day-to-day of Pacific Northwest life. I want to call it grounded except that it’s an ocean that unites it.

I loved this "novel in triptych" that so beautifully interrogates the heartbreaking gap between an immigrant Mennonite father and his Canadian son, the predictable generation gap intensified by the culture shift. Crafted with all the precision of a master carpenter, it is full of sentences to run your hand across in wonder, right up to the shocking conclusion. (Full disclosure: An Andreas Schroeder workshop at the Fernie Writers' Conference in 2011 saved my writing life and my first novel.)

Beyond the Outer Shores: The untold story of Ed Ricketts, the pioneering ecologist who inspired John Steinbeck, by Eric Enno Tamm

When Ricketts died suddenly in 1948 he and John Steinbeck were planning a trip to the BC coast to complete the work that Ricketts had begun on earlier trips (for a book to be titled The Outer Shore). In addition to telling Ricketts's story, Tamm also delves into Ricketts's friendship with Steinbeck. I was riveted by it all—the window into the times, the tumultuous relationship between the two men, the way reality informed Steinbeck’s fiction, the ecology, and the solid writing—just a great, great read.

The Sky Is Falling, by Caroline Adderson

I grew up afraid of nuclear annihilation and if I’d ended up at university in my twenties instead of my forties I might have been one of the characters in this novel, wanting to change the world, not knowing how, getting drawn in to hair-brained and ultimately dangerous schemes, by chance or circumstance. The main character’s passion for Anton Chekhov is an added layer of awesome.

Set in the British Columbia Interior, the novel Cambium Blue is an homage to resource towns, independent women and local newspapers.

In 1994, at the outset of the bark beetle epidemic that will decimate millions of acres of pine forest in western North America, a fiercely independent lumber town faces a bleak future when its only sawmill is shuttered. Encouraged by a provincial government intent on transitioning the region from timber to tourism, the town council embraces a resort developer as their last, best hope. A failure to anticipate the human cost of that choice ignites a struggle for the very soul of the community.

Cambium Blue’s narrative alternates between three viewpoints. Stevie Jeffers is a timid, 24-year-old single mom who stakes her future on the town after a traumatic break-up. Nash Malone is a reclusive Spanish Civil War veteran who supplements his pension with salvage from the local dump—an occupation that puts him on a collision course with the town’s plan to beautify itself. At 54 years old, cash-strapped and short-staffed Maggie Evans is treading water while waiting to sell her dead husband’s newspaper, the barely solvent Chronicle. As the characters’ lives intertwine and the conflict heats up, they will each be challenged to traverse the ambiguous divide between substance and hype, past and future, hope and despair.

Rich with unforgettable characters and set in the Interior hinterland of British Columbia, Cambium Blue is a masterful and compassionate illumination of the human politics of a small town, and the intersection of individual lives with political agendas and environmental catastrophes.