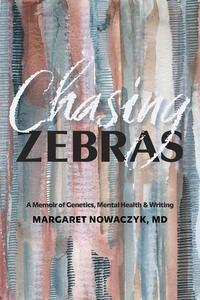 Award-winning author Wayne Grady writes, “As a geneticist, Margaret Nowaczyk has seen ‘the enduring misery of the human condition.' But as a writer, she has turned that misery into pure art. Chasing Zebras is a brilliant testimony to the healing power of words.”

You can enter to win a copy of Nowaczyk's memoir now!

And, unsurprisingly for someone who's crafted such a compelling narrative from her own life experiences, Margaret Nowaczyk is a reader with an eye for story. In the following fabulous reading list, she recommends some of her favourite short fiction collections.

Ever since Ursula LeGuin’s “Mazes” broke my heart forty years ago, I have admired short story writers. There is nothing more devastating, more poignant than a short story that packs an emotional wallop in four pages. I love how it leaves me wanting more, how it leaves me thinking about it for days, weeks, some for years.

After years of writing and reading innumerable short stories, I am left with seven published stories and twice as many in various stage of undress. No collection to my name. Which is why I especially admire writers who not only write great short stories but who also produce complete and cohesive collections.

Here are a few that stoked my admiration by subject matter (bodily functions and dysfunctions, medical and scientific mishaps, genetic conundrums), attention to women as protagonists, adventurous or experimental form, and exploration of folk tales as fodder for magnificent short fiction.

What drew me to this collection was the title. “Hopeful monsters” is an evolutionary genetic term that refers to new mutations that advance evolution. And while the stories themselves do not deal with genetic “monstrosities” (with the exception of a baby with a tail and a woman who—maybe as a result of a genetic issue—is unable to breastfeed without pain), Goto’s hopeful monsters are women confounded by the familial and the supernatural with a good sprinkling of myth and magic realism.

Miscione’s slim volume caught my attention with its cover illustration, a pencil drawing of a deformed skeleton IV pole. The contents did not disappoint: the stories in Auxiliary Skins deal with the relationship between the physical body and the intellectual and spiritual that struggle to rise above the often freakishly depicted workings of the flesh. Her prose is startlingly innovative and beautiful, even when rendering suppurating wounds or 'roid rage; she has a style all her own I have dubbed “Miscionesque”.

What can be said about a collection that provides us with a recipe for how to kill a past wrongdoer on an Arctic cruise and get away with it, includes a modern version of the werewolf myth, and is laced throughout with Atwood’s razor-sharp wit and sardonic humour other than it is absolutely amazing? Atwood describes the stories in this collection as tales, in that they draw inspiration from folk fables, one of the best sources of story material. The virtuoso combination of the vampire myth with modern science and genetics of inherited diseases (porphyria cutanea tarda, thought to be the inspiration for the myth) in “Lusus Naturae” took my breath away. Throughout, Atwood does not shirk from depicting the indignities of old age that befall women, including widowhood, being unwanted, and—judged by young ‘uns, of course—living too long.

In these linked stories, the lives of a Polish woman and her family are seen through a kaleidoscopic lens that follows them over twenty years. From communist Poland, to their new home in Canada, then back to Poland, we see Basia and her mother Magda at pivotal moments in their lives. Impressive by the skillfully rendered and nuanced points of view (a not so innocent girl navigating the politics of the playground and the endemic sexual threats, an older woman in conflict with her daughter-in-law, an intellectually disabled and victimized adolescent girl) and experimental in form (one story takes a form of frames from a film with deleted scenes for the “director’s cut”), the stories satisfied not only my desire to comprehend the changes that befell me as an immigrant, but also as a forever-changing woman.

The Party Is Here, by Georgina Beaty

The best words to describe the darkly humorous stories in this collection might be “women on the edge of a nervous breakdown” brought on by global warming, infertility, and scientific investigation. Wholly original, these stories introduce us to a bevy of women intent on saving the world an animal at a time or improving it with a unique art project stemming from fertilized human eggs. With an amazing sense of timing and fearlessly probing our sensitivities and insensitivities, this debut collection offers a bold yet nuanced view of the preoccupations of the 21st century.

With protagonists including conjoined twins, the mind of Marie Curie, and a 1920s radium girl who gains superpowers, I couldn’t do anything but enjoy this collection of humorously dark and, at the same time, tender stories. The characters are precisely and lovingly drawn and even if they are not the nicest people, I ended up rooting for them. A wonderful cross-section of human weirdness and greatness.

Lesser Known Monsters of the 21st Century, by Kim Fu

I have only started reading this collection but I already am enthralled by the language and subject matter. And I can’t wait to read what the publisher describes as “the strange […] made familiar and the familiar strange, such that a girl growing wings on her legs feels like an ordinary rite of passage, while a bug-infested house becomes an impossible, Kafkaesque nightmare. […] a group of children steal a haunted doll; a runaway bride encounters a sea monster; a vendor sells toy boxes that seemingly control the passage of time; an insomniac is seduced by the Sandman.”

Learn more about Chasing Zebras: A Memoir of Genetics, Mental Health and Writing:

From leaving Communist Poland to enduring the demands of medical school, through living with a long undiagnosed mental illness to discovering the fascinating field of genetics, plunging into the pressures of prenatal diagnosis and finally finding the tools of writing and of narrative medicine, Margaret Nowaczyk shares a journey that is both inspiring and harrowing. This is a story of constant effort, of growth, of tragedy and of triumph, and most of all, of the importance of openness.