I Am Because We Are: An African Mother’s Fight for the Soul of a Nation, by Chidiogo Akunyili-Parr

About the book: In this innovative and intimate memoir, a daughter tells the story of her mother, a pan-African hero who faced down misogyny and battled corruption in Nigeria.

Inspired by the African philosophy of Ubuntu — the importance of community over the individual — and outraged by injustice, Dora Akunyili took on fraudulent drug manufacturers whose products killed millions, including her sister.

A woman in a man’s world, she was elected and became a cabinet minister, but she had to deal with political manoeuvrings, death threats, and an assassination attempt for defending the voiceless. She suffered for it, as did her marriage and six children.

I Am Because We Are illuminates the role of kinship, family, and the individual’s place in society, while revealing a life of courage, how community shaped it, and the web of humanity that binds us all.

Black & White: An Intimate, Multicultural Perspective on “White Advantage” and the Paths to Change, by Stephen Dorsey

About the book: The anticipated debut by a biracial community leader and citizen activist, exploring his lived experience of systemic racism in North America and the paths forward.

My race duality has given me a unique perspective on both the Black and white experience in Canada…. What became most evident to me—most universal—was an important need for building bridges of understanding between Black and white Canadians. A need to inform and educate so that hopefully, in due time, we can achieve real change.

As a bilingual, biracial man, straddling Black and white, English and French Canada, Stephen Dorsey lives in a world of dualities. In his deeply personal and insightful debut, he offers readers intimate and unfiltered access to his lived experience of anti-Black racism around the world, including Canada, the United States, and Europe, focusing on his formative years growing up in 1970s Montreal as a Black child in a white family headed by a racist stepfather, and details his personal awakening inspired by the Black Lives Matter movement.

A powerful blend of autobiography and social analysis, Black & White is an intimate excavation of systemic racism in North America—from our health-care and education systems, to policing and law, to a deep analysis of the uniquely intersectional discrimination faced by minorities in Dorsey’s home province of Quebec. With an inclusive and accessible approach, aimed at community connection and education, Dorsey delves deep into Canada’s history of racial discrimination and, by contrasting it with that of our American neighbours, debunks our nation’s mythological narrative, providing necessary context on white privilege, which he calls “white advantage,” and offers concrete pathways to lasting societal change.

Holding readers gently to account, Black & White is the book for the ally in all of us.

It Was Dark There All the Time: Sophia Burthen and the Legacy of Slavery in Canada, by Andrew Hunter

About the book: “My parents were slaves in New York State. My master’s sons-in-law … came into the garden where my sister and I were playing among the currant bushes, tied their handkerchiefs over our mouths, carried us to a vessel, put us in the hold, and sailed up the river. I know not how far nor how long — it was dark there all the time.”

Sophia Burthen’s account of her arrival as an enslaved person into what is now Canada sometime in the late 18th century, was recorded by Benjamin Drew in 1855. In It Was Dark There All the Time, writer and curator Andrew Hunter builds on the testimony of Drew’s interview to piece together Burthen’s life, while reckoning with the legacy of whiteness and colonialism in the recording of her story. In so doing, Hunter demonstrates the role that the slave trade played in pre-Confederation Canada and its continuing impact on contemporary Canadian society.

Evocatively written with sharp, incisive observations and illustrated with archival images and contemporary works of art, It Was Dark There All the Time offers a necessary correction to the prevailing perception of Canada as a place unsullied by slavery and its legacy.

Rebound: Sports, Community, and the Inclusive City, by Perry King

About the book: From basketball hoops to cricket bats, the role community sports play in our cities and how crucial they are to diversity and inclusion.

“The virus exposed how we live and work. It also revealed how we play, and what we lose when we have to stop.” For every kid who makes it to the NBA, thousands more seek out the pleasure and camaraderie of pick-up basketball in their local community centre or neighbourhood park. It’s a story that plays out in sport after sport – team and individual, youth and adult, men's and women's. While the dazzle of pro athletes may command our attention, grassroots sports build the bridges that link city-dwellers together in ways that go well beyond the physical benefits. The pandemic and heightened awareness of racial exclusion reminded us of the importance of these pastimes and the public spaces where we play. In this closely reported exploration of the role of community sports in diverse cities, Toronto journalist Perry King makes an impassioned case for re-imagining neighbourhoods whose residents can be active, healthy, and connected.

"I couldn’t stop reading Perry King’s Rebound. An evocative essay about the transformative and uniting power of local sports in a city with residents from every country in the world, the book is well researched, entertaining, and informative. It spoke to my own experiences as a young athlete fitting into a new city when I first came to Toronto – and to the importance our city government must place on local recreation and sports if our city is to help all residents reach their potential. A fantastic contribution to understanding Toronto – and to the power of local recreation in any major city." —David Miller, former mayor of Toronto

No Crystal Stair, by Mairuth Sarsfield

About the book: First published in 1997, No Crystal Stair is an absorbing story of Montreal in the 1940s. Raising her three daughters alone, Marion discovers she can only find gainful employment if she passes as white. Set in Little Burgundy against the backdrop of an exciting cosmopolitan jazz scene—home of Oscar Peterson, Oliver Jones, and Rockhead's Paradise—and the tense years of World War II, No Crystal Stair is both a tender story and an indictment of Canada's "soft" racism.

In 2005, No Crystal Stair was nominated for that year's Canada Reads and was defended by Olympic fencer Sherraine MacKay. 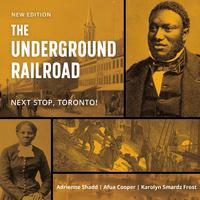 About the book: Stories of the hopeful, brave people who fled slavery and made Toronto their home.

“An engaging and highly readable account of the lives of Black people in Toronto in the 1800s.” —Lawrence Hill, bestselling author of The Illegal

The Underground Railroad: Next Stop, Toronto! explores Toronto’s role as a destination for thousands of freedom seekers before the American Civil War. This new edition traces pathways taken by people, enslaved and free, who courageously made the trip north in search of liberty and offers new biographies, images, and information, some of which is augmented by a 2015 archaeological dig in downtown Toronto.

Within its pages are stories of courageous men, women, and children who overcame barriers of prejudice and racism to create homes, institutions, and a rich and vibrant community life in Canada’s largest city. These brave individuals established organizations not only to help newcomers but to also oppose the ongoing slavery in the United States and to resist racism in their adopted city.

Based entirely on original research, The Underground Railroad offers fresh insights into the rich heritage of African Americans who became African Canadians and helped build Toronto as we know the city today.

For King and Country, by Gloria Wesley (Young Adult)

About the book: At seventeen, Will Westley lies about his age to try to enlist to fight in the First World War. He is determined to make his late father proud and take care of his mother. After several unsuccessful attempts — he is rejected for his color, not his age — Will is finally accepted. He is eager and proud to join the #2 Black Battalion — Canada's first and only all-Black military regiment. But not everyone is pleased. Soon after becoming a soldier, Will experiences racism and discrimination by superiors and even some fellow soldiers, who refuse to fight alongside Black Canadians.

This book offers a true-to-life fictional account of the experiences of Black Canadians whose efforts to join up finally resulted in them being shuffled off into a segregated unit, the #2 Construction Battalion, whose assignment during the war did not include fighting. Insteady, the Battalion performed manual labour even when soldiers were ready and willing to endure the horrors of frontline fighting in the trenches.

Biographical Dictionary of Enslaved Black People in the Maritimes, by Harvey Whitfield

About the book: In the windswept and cold Canadian Maritimes, slavery found fertile ground that produced multiple generations of enslaved people. This book sheds light on more than 1,400 brief life histories of mostly enslaved Black people, with the goal of recovering their individual lives.

In this important book, Harvey Amani Whitfield unearths the stories of men, women, and children who would not otherwise have found their way into written history. The individual lives mentioned come from various points of origin, including Africa, the West Indies, the Carolinas, the Chesapeake, and the northern states, showcasing the remarkable range of the African experience in the Atlantic world. Whitfield makes it clear that these enslaved Black people had likes, dislikes, various personality traits, and different levels of physical, spiritual, and intellectual talent. In doing so, he affirms the notion that all of these slaves were unique individuals, despite the efforts of their owners and the wider Atlantic world to dehumanize and erase them.

Biographical Dictionary of Enslaved Black People in the Maritimes helps us understand the challenges of race in our own time by telling a new story about Canadian history—one rooted in the difficulties of slavery and the actions taken to fight for dignity.