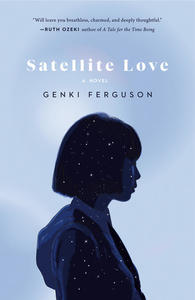 We've got three copies of Genki Ferguson's Satellite Love up for giveaway!

Don't miss your chance to win.

I always feel compelled to support weird, in whatever form it might appear. Scorpion pizza at the Calgary Stampede? I’ll take it. Punk shows at the public library? I’ve been. And lately, I feel proud to say, I can add writing CanLit to the list.

I’ve read a fair amount about what makes CanLit, CanLit. You could argue that it’s an affinity for the short story, the search for identity, or even a rugged frontier charm. Our Alice Munros and Timothy Findleys can certainly point to that. I’ll posit another marker here, however. CanLit likes to get weird.

When I wrote my first novel, Satellite Love, I very keenly had this in mind. Satellite Love tells the tale of Anna Obata, a lonely girl in Southern Japan who falls in love with a telecommunications satellite. And while not set in the Great North, I took a certain pride at the puzzled looks the synopsis would receive. A bittersweet coming-of-age story, I knew I wanted to add some weird. And the titles below certainly helped on that journey.

So! Without further ado, a list of the greatest–and strangest–Canadian fiction has to offer:

Ah yes, the classic-turned-viral-twitter-post. Mirian Engel’s Bear tells the story of a woman in northern Ontario who starts a steamy affair with a…bear? Engel pulls no punches, and makes no attempt to soften what is a visceral relationship. But more than shock-erotica, Bear is a deeply complex and tightly-written novel of ideas, one that explores themes of self vs nature, the love we receive, as well as this country’s difficult colonial legacy. Hey, it didn’t win the Governor General’s for nothing.

Bramah and the Beggar Boy, by Renée Sarojini Saklikar

Let all evil die and the good endure. So reads the epigraph for Bramah and the Beggar Boy, a work ten years in the making by Renee Sarojini Saklikar, Surrey’s Poet Laureate from 2015-2018. This is an ambitious work, an epic time-travelling fantasy about the perils of climate change, the ties of fate, heartbreak and destruction, all told in verse. Underneath its innovative form, however, lies a truly human core. And with writing this beautiful, Bramah and the Beggar Boy isn’t one to miss

Another Canadian classic, this time from the poet of the void. Beautiful Losers made waves not just for its content–a dream-like, highly explicit story of a “lust tormented narrator” haunted by the dead–but also for the bizarre history surrounding it. Originally written in three weeks, production was delayed when Cohen lost a manuscript to the wind, then further dampened when early reviews were all deemed too negative to use. Now seen as ahead of its time, Beautiful Losers is one of the earliest examples of postmodern Canadian literature. Did I mention that it's written stream-of-consciousness?

Half Life, by Krista Foss

As someone with an ongoing obsession with nuclear history, Krista Foss’ Half Life jumped out to me immediately. The story of an unorthodox physics teacher, Half Life succeeds in bringing together themes of trauma, abuse, mythology, and yes, even theoretical physics. Even more, Half Life is highly inventive, written in a whirling freeform fashion, hopping across time with ease. Just like Neil Bohr, who’s spectre haunts this novel, Krista Foss is never afraid to break convention.

Buying Cigarettes for the Dog, by Stuart Ross

I don’t think another book has made me laugh as hard as Buying Cigarettes for the Dog has. Neither has any book unnerved me so deeply on the following pages. Ross’ collection of stories, ranging from the outright hilarious to the downright eerie, has one string tying everything together. Namely, a penchant for the weird. A highlight story is “Me and the Pope”, in which the narrator has to deal with an annoying ex-college roommate crashing on his couch, who also happens to be…the pope? With a book trailer like this, how can you resist?

Set in 1999 Japan, Satellite Love is a heartbreaking and beautifully unconventional debut novel about a girl, a boy, and a satellite--and a bittersweet meditation on loneliness, alienation, and what it means to be human.

On the eve of the new millennium, in a city in southern Japan that progress has forgotten, sixteen-year-old Anna Obata looks to the stars for solace. An outcast at school, and left to fend for herself and care for her increasingly senile grandfather at home, Anna copes with her loneliness by searching the night sky for answers. But everything changes the evening the Low Earth Orbit satellite (LEO for short) returns her gaze and sees her as no one else has before.

After Leo is called down to Earth, he embarks on an extraordinary journey to understand his own humanity as well as the fragile mind of the young woman who called him into being. As Anna withdraws further into her own mysterious plans, he will be forced to question the limits of his devotion and the lengths he will go to protect her.