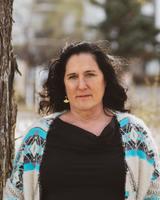 "Tainna: The Unseen Ones is an explosive force of sadness, anger, humour and beauty, full of moments that surprise and pummel and still provide hope. This collection is both vivid and raw but infused with a sparkling poetry and the wisdom of the old ways. Like the spirits Norma Dunning describes in these stunning and original stories, this is a book that will never leave you.” – 2021 Peer Assessment Committee

Dr. Norma Dunning is a writer as well as a scholar, researcher, professor, and grandmother. Her first book, the short story collection, Annie Muktuk and Other Stories (University of Alberta Press, 2017), received the Danuta Gleed Literary Award, the Howard O’Hagan Award for Short Story and the Bronze for short stories in the Foreword INDIES Book of the Year Awards. She is also the author of the bestselling poetry collection, Eskimo Pie (Bookland Press, 2020). She lives in Edmonton, AB.

Tainna: The Unseen Ones is a collection of stories featuring a range of Inuk characters who “meet the prejudice, misogyny and inequity of the Canadian South with humour and tenacity.” Tell us more about how the collection and how it came together.

This collection was written in opposition to Annie Muktuk and Other Stories, in that, it was intentional to have modern-day Inuk characters who are living outside of Inuit Nunangat (homeland). I wanted to trouble people’s perceptions of Inuit and how we as Inuit Cdns stay stuck in the past inside of the mainstream imagination.

This is your second collection of short fiction, following your award-winning debut Annie Muktuk and Other Stories. The short story is such a complex, compressed, and often overlooked genre. What do you most love about the form?

I like the precision that I am forced to use. Every word has to matter. Every sentence has to stand on its own. I think short story writers should never be overlooked, we are writing as concisely as possible and filling up the reader’s imagination in a brief amount of space.

Imagine you could spend a day with any one of the characters from your collection. Who would you choose, what would you do, and what would the two of you talk about?

I would spend a full day with Ittura from the story “Eskimo Heaven”—now that’s a spirit-guy who is loaded with energy and fun. We would just walk around Whyte Avenue and talk about whatever fell out of our mouths! I have a secret crush on Ittura.

What does it mean at this point in your career to win the Governor General’s Literary Award for Fiction?

The Governor General’s Award is a huge validation of my work and all the writing that I’ve done throughout the years. I am so very grateful and thank all of Canada. I think that no matter how much we write and publish, it is always important to have someone else say, “Good Job!”

49th Shelf is built around a community of readers and fans of Canadian literature. What Canadian authors are you reading these days?

My favourite Canadian writers remain Marilyn Dumont and Richard Wagamese. They are the authors that I read for comfort at night. They both just lift my spirits up. They’re amazing.

Excerpt from Tainna (The Unseen Ones)

Billy Townsend slid his skinny ass onto the John Deere lawnmower. It was still a bit dark out, leaving the early spring morning air heavily scented with dew. He loved that smell. One of the best things about his job was being able to head out onto the golf course and drive the mower in the early morning.

After three decades of military assignments that scattered his life with time zones, this early morning duty was his simplest. He had finally reached that point in his life where he could relax at work, something he had never been able to do when serving his country. Today was the first mowing of the greens for the season. One of his favourite days. He knew it would be a long day, but the first mow was always the best mow.

He had seen it all during his years of service. So many cold nights during Desert Storm, so many hot, sweltering days when you begged God for a breeze—and when it came, it was loaded with sand that would seep its way into every crack of your body. Every line on his face. He put in those final years and got the hell out. Out onto Civvy Street, where his biggest concern was getting through the Tim Hortons drive-thru on his way to work. It was a simple life now.

He liked the routine of his days. The hum and flow of life without others to answer to. Each spring, summer and early fall, all he did was “mow da lawn.” He smiled as he thought of his French military buddies making fun of him and calling him “Billy Mow DaLawn.” He hummed in time with his mower motor as he headed off toward the first green. Cresting the small hill, he looked down upon a flock of Canada geese sitting in a circle.

Sitting in a circle with their necks pointing outwards. Sitting like bison do when protecting their young against aggressors. Billy couldn’t believe his eyes. He put his mower into stealth mode and moved silently toward the geese.

He eased his mower toward the circle. Not one of the geese moved. Not one goose let loose a honk. Not one of them lifted its head from under its wing. Billy didn’t understand it. He was confused. He felt like he was in a bad dream where everything falls in slow motion. He touched his left pocket to make sure he had his cellphone. How was he going to explain what he’d seen when he called his wife?

Here he was, a decorated soldier, a man who had served his country, who had sat through raids and had had spitfire artillery splashing all around him. And now here he sat frozen, a couple yards away from a flock of geese sitting in a circle and acting as passive as Gandhi. He didn’t know what to do. Play Duck-Duck-Goose with them?

“Honk. Honk!” Not one goose lifted its head.

Finally, he jumped off his machine and decided to take a run at them. He put his head down and dug his right foot into the thick Kentucky blue grass and pushed his body forward with his head wrapped inside his tattooed forearms.

“AAARRRRGGGHHH !” he growled, and when he looked up, he saw the geese taking a few steps. They were cluttering his daybreak. He stood in awe as all sixty of them swelled into the beautiful first light canvas of red and soft blue. He felt a tear slip from one eye and sighed.

What a beautiful sight. What a gorgeous start to his day. If he were a religious man, he would have called it a blessing.

His body turned in a slow semi-circle, following the pattern of the wings taking flight. All he could think to do was to applaud the symphony of geese that filled the sunrise. His hands pounded against one another and reached high over his head. A singular standing O. He was in a state of amazement.

Amazed at the beauty of life. Amazed at nature. Amazed and grateful for being alive. He shook his head and uttered a quiet thank you to the sky, smacked his wide palm against his lips and blew a kiss heavenwards. He turned back toward his machine and that was when he saw it. A lump.