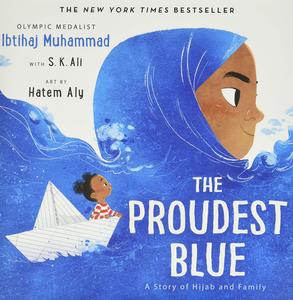 The Proudest Blue, by U.S. Olympic fencing medalist Ibtihaj Muhammad, with S. K. Ali, illustrated by Hatem Aly, is the story of Faiza, excited for her older sister’s first day wearing a hijab. In the schoolyard, Faiza keeps looking around to see Asiya’s head covering, which is the colour of the ocean, but then she witnesses some boys calling it a tablecloth. She remembers her mother’s words: “If you understand who you are, one day they will too.” Faiza dreams of the day she too will look and feel like a princess in her first-day wearing hijab. “Don’t carry around the hurtful words that others say. Drop them,” her mother says, empowering the sisters to stay true to themselves. (Author’s Notes explain this is Muhammad’s story, written by Ali.)

Once Upon an Eid, edited by S. K. Ali and Aisha Saeed, is an anthology of short stories by 15 Muslim authors covering all things Eid. Stories feature food, clothing (the Eid dress!), sacrifice and generosity. Standouts include “Taste,” in free verse form, about a girl taking over the cooking of her mother’s traditional Eid dish, trying to use “agak-agak” (instinct) rather than measuring cups. Eventually she reveals her heart-wrenching guilt at being responsible for her mother’s absence. “Seraj Captures the Moon” is a short fable in graphic form about finding the moon, the start of Ramadan. “Searching For Blue” captures a refugee experience and “Not Only An Only” is about Aya, the lone Muslim girl in school until outspoken Hana arrives, seeming “ more Muslim than Aya.” 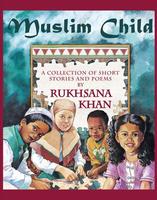 Muslim Child, A Collection of Short Stories and Poems, by Rukhsana Khan, illustrated by Patty Gallinger, with sidebars by Irfan Alli, is considered nonfiction. The stories are a window into Islamic customs and rituals while portraying real issues: a boy struggles with guilt because he skips a prayer (this is accompanied by step-by-step drawings of the prayer process); a non-Muslim character fears a “black ghost”—a woman in full niqab; two children try (unsuccessfully) to resist jelly candies made from pig byproducts. There's a story about Mohammad and an elephant, as well as a timeline of the Prophet’s life. There are recipes for samosas and instructions to make Eid cards, as well as a map of the Hajj (the journey to Mecca), and a compelling narrative about a boy separated from his parents amid its millions of visitors. 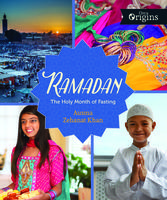 Ramadan, The Holy Month of Fasting, by Ausma Zehanat Khan, also nonfiction, presents information with colourful photos and sidebar facts (e.g. about Quran recitation competitions.) It gives a thorough overview of the meaning of Ramadan and how fasting builds empathy. There are recipes, profiles of real people (e.g., Olympiad Ibtihaj Muhammad), anecdotes of charity, a glossary and information about how celebrations vary in different countries.

The next three stories are written by Rukhsana Khan. 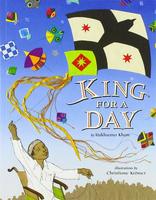 King for a Day, illustrated by Christiane Kromer, takes place during Basant, the annual spring kite festival in Pakistan. It’s the story of a bullied boy who uses a wheelchair gaining control of his world for one day. With his homemade kite, Malik and his sister engage in a battle from the rooftops with the bully. After conquering the mean boy’s kite, Malik then sets other kites free by slicing through their strings with his kite. It ends with a poignant twist; from his rooftop vantage, Malik witnesses the bully preying on another victim in the street below. There is a note about Basant at the back. 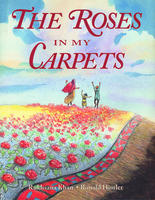 The Roses in My Carpet, illustrated by Ronald Himler, is a dramatic story of a young refugee struggling with nightmares of the Afghani war. His daily life in the muddy camp consists of fetching water in a bucket at dawn, sharing what little bread he has with his sister and mother and being unhappy at school. Thanks to a sponsor, hope lies in the carpets he is learning to weave, the colourful threads represent the parts of his life. When tragedy strikes, he uses the carpet, particularly the roses, to lift his spirits. 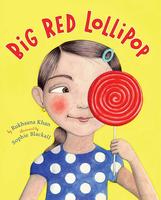 The Big Red Lollipop, illustrated by Sophie Blackall, is a go-to book for students making text-to-self connections, with its theme of sibling conflict. Rubina’s invited to her first birthday party but Ami (her mother) forces her to take her younger sister, Sana—“They don’t do that here!” says Rubina. Sana ends up going to the party, and even worse, ends up eating most of the big red lollipop from Rubina’s loot bag. The story comes full circle when Sana comes home with her first birthday invitation and her younger sister, Maryam, demands to go, too. A story perfect for discussions of empathy.