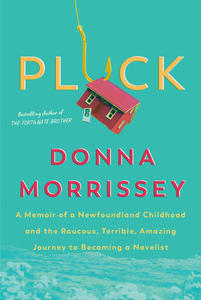 (We've got Donna Morrissey's memoir Pluck is up for giveaway right now! Don't miss your chance to enter to win.)

While writing Pluck I was drawn to the stories of others struggling through pandemonium and learning to quieten its crazed babel. We all have a have memoir in us, we talk it out every time we sit with family, friends or shrinks, trying to make sense of whatever the hell just happened back there, and why’s it still happening.

We find patterns of behaviour in all of us, and in our relationships and workplaces and the towns we live in.  We are all living out the stories of our ancestors going back thousands of years. Which is why I varied my reading to include more objective works as well as personal memoir. God knows, we need all the help we can in navigating this terrible wonderful life bestowed upon us.

These are only some of the books from which I learned of new questions to ask, and found answers to those I hadn’t thought of asking. 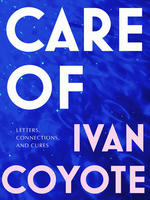 Care Of: Letters, Connections, and Cures, by Ivan Coyote

As deep as it is poignant, Care Of is a collection of letters written to one of Canada’s most wise and compassionate voices, Ivan Coyote. Dealing with family fragility, non-binary and Trans identity, Coyote has spent most of their life writing, speaking, travelling, delivering their words of hope, love, and acceptance to thousands of students, their friends, family, and all others caught in the chaos of change, offering them respite in the calmer waters of their humanity.

I love humour. I love to sit with souls who have learned that laughter is a force against the most crippling of emotional assailants. Show me a room where Ivan Coyote sits and you’ll find me in their corner. Listening. And Laughing. And learning. And listening.

If I Knew Then: Finding Wisdom in Failure and Power in Aging, by Jann Arden

Jann Arden’s memoir consists of fleshing out her own story through the tales of the mother and aunts who she comes to know as “crones”—those unapologetically wise, strong, fierce trail-blazers that live their lives by their own rules. Poignant, funny, and pumped with truth, this is a book filled with the character of an aging woman journeying through her mother’s progression into dementia, and her own journey into Cronehood.

Given my own care-taking journey with my mother through her battle with breast cancer and to her death, I’m a sucker for mother/daughter stories. I’m a sucker for strong women and strong men taking the battle axe of life by its handle and bushwhacking through its chaos and the maelstrom of emotions clinging like burrs to one’s heart. Jann Arden, enlightened to meet you!!

Love Lives Here: A Story of Thriving in a Transgender Family, by Amanda Jette Knox

Amanda Jette Knox writes of her mental health issues, her challenges and courage in living with, understanding, and accepting her transgender daughter and spouse. Love Lives Here is a story of frustration and resilience and of love and acceptance.

Mixing humour with pain is the mainstay of my family, and love trumps all. Knox writes through her suffering with like humour and passion and insights and love. Amanda, bless you for your honesty and for bringing to us yet another multi-faceted mountain with its own unique terrain, its valleys and peaks, and the grace within which you and your family continue to climb.

Ghadery is a bi-cultural and bi-racial writer who has written a brave and deeply personal memoir about her struggles. Like many writers, it took Ghadery a range of diverse life experiences before she felt that she had something to say—and say it she does. Her journey encompasses the range from teenage rebellion—to substance abuse—to self-harming behaviours—to episodes with mental illness—to motherhood.

I find in Fuse yet another story of swimming through pandemonium and surfing the crests of order. Ghadery shares key moments in her life with an exquisite, almost poetic use of language. I so admire the soul that celebrates the difficulty of life and its victories, both big and little—and oftentimes partial—along the way. Bravo, Hollay!

Walking Away From Hate: Our Journey Through Extremism, by Lauren Manning and Jeanette Manning

Lauren, an angry, hurting, rebellious teen, finds refuge from the grief of her father’s death within a violent white supremacist group in downtown Toronto. Her mother, Jeanette, lives the hell of coping with her own grief from her husband’s death and that of losing her daughter as well, to a life of criminality and extremism that she never thought existed.

This story captured me in that it is written from both the mother and the daughter’s experience. But what makes it most intriguing is the ”up close and personal” look at what happens within such hate groups, and the fact they truly exist within our own backyards, preying on the vulnerabilities of our troubled sons and daughters. Lauren got out and is now a spokesperson for teens teetering on the edge of such life-defining decisions, and thank God for you, Lauren. Listening to your young voice, so full of wisdom and courage is heartening indeed. And you, Jeanette, for the tolerance and dogged determination you showed in getting your daughter back—nothing short of heroic!!

Blood in the Water: A True Story of Revenge in the Maritimes, by Silver Donald Cameron

Donald Cameron writes of the relationships of a small town culture and the moral dilemmas playing themselves out inside its walls. Memoir, murder, courtroom drama, tradition, villainy—this story has it all.

If a village could write the stories happening within its homes and neighbourhoods, this Cape Breton community would write of its most errant villager, Phillip Boudreau, and his terrorizing and vandalizing of his neighbours till they shot him. Blood in the Water isn’t just a murder story, it’s a complicated family/community affair that challenges us all in our thinking about law and order and how much chaos we would endure before we started laying out the law in our own manner.

Peace by Chocolate: The Hadhad Family’s Remarkable Journey from Syria to Canada, by Jon Tattrie

Peace by Chocolate is the story of the Hadhad family whose beloved country, Syria, was destroyed by a brutal civil war. Their lives were equally destroyed along with their homes and their livelihood, a chocolate factory. Three years later as refugees in Lebanon, and through much emotional turmoil, they found themselves in Antigonish, Nova Scotia, and started rebuilding themselves and their chocolate business.

Nothing enhances reading a good book more than nibbling on chocolate. But the courage and sacrifices demanded of this family as they eke out new beginnings on foreign terrain, navigating a different culture, language, and all else, is richer beyond any edibles we can consume. Thank you, Jon Tattrie, for personalizing this one family from the thousands of other displaced souls struggling to survive on this planet.

Breathe Cry Breathe: From Sorrow to Strength in the Aftermath of Sudden, Tragic Loss, by Catherine Gourdier

On the warm fall evening of November 7, 2009, Catherine Gourdier’s entire family were happily gathering at her brother’s house for her youngest sister Julie’s surprise horror-themed birthday party. Moments before the expected arrival of her parents and Julie, Catherine was dabbing fake blood on her sister Deb’s neck when she got the call that there had been an accident. An elderly driver had struck her mother and little sister while they were walking home from church. They succumbed to their injuries. Her devastated father died of a broken heart several weeks later.

Why would I choose to read this book? Hmmm. Gourdier writes that there is no pain more gut wrenching than that of grieving the loss of loved ones. There are no pills that ease the overwhelming feeling of sorrow.

I know, Catherine. I know. Times when I was sooo bent over in pain from grief, I would find comfort in reading about recent tragedies in the papers—the knowing that their grief was fresher than mine. That someone was hurting like me, possibly more. Yours, Catherine, is a story that would’ve brought me much selfish comfort. But, is it selfish? We write so’s to share, to help others. And the light brought to us through our journeys is surely a guardrail for others to hold onto during theirs. This story is one hell of a guardrail. Thank you, Catherine Gourdier, for the light you bring us.

When Donna Morrissey left the only home she had ever known, an isolated Newfoundland settlement, at age 16, she was ready for adventure. She had grown up without television or telephones but had absorbed the tragic stories and comic yarns of her close-knit family and community. The death of her infant brother marked the family, and years later, Morrissey suffers devastating guilt about the accidental death of her teenage brother, whom she'd enticed to join her in the oilfields. Her misery was compounded by her own misdiagnosis of a terminal illness, all of which contributed to crippling anxiety and an actual diagnosis of PTSD. Many of those events and themes would eventually be transformed and recast as fictional gold in Morrissey's novels.

In another writer's hands, Morrissey's account of her personal story could easily be a tragedy. Instead, she combines darkness and light, levity and sadness into her tale, as her indomitable spirit and humour sustain her. Morrissey's path takes her from the drudgery of being a grocery clerk (who occasionally enlivens her shift with recreational drugs) to western oilfields, to marriage and divorce and working in a fish-processing plant to support herself and her two young children. Throughout her struggles, she nourishes a love of learning and language.

Morrissey layers her account of her life with stories of those who came before her, a breed rarely seen in the modern world. It centers around iron-willed women: mothers and daughters, wives, sisters, teachers and mentors who find the support, the wind for their wings, outside the bounds given to them by nature. And it is a mysterious older woman she meets in Halifax who eventually unleashes the writer that Morrissey is destined to become.

An inspiring and insightful memoir, Pluck illustrates that even when you find yourself unravelling, you can find a way to spin the yarns that will save you—and delight readers everywhere.