When I first started thinking about a picture book about Mount Everest, I thought it was going to be a poetry collection. I read a lot about Everest and the Himalaya region—all kinds of books. Stephen Alter’s Wild Himalaya made me think this might be a sort of natural history of Mount Everest—in poems! 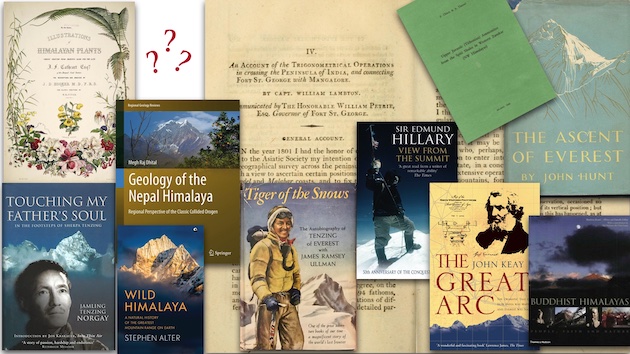 Oh, I was in love with that idea! Poems about the geology of the mountain’s formation, the people who live in the Khumbu region of Everest, the climbers, the man for whom the mountain was named, the arduous process that led to its naming, the antics of a little spider that lives above the tree-line where there’s nothing for it to eat. I was in love with all of this research. I was as lightheaded as if I were reaching the heights of Everest myself.

In fact, during that time, my husband and I did go hiking in Nepal: and in between being dizzy from the altitude and exhausted by 16-22 km of hiking daily, I was also intoxicated by the possibilities of these poems. 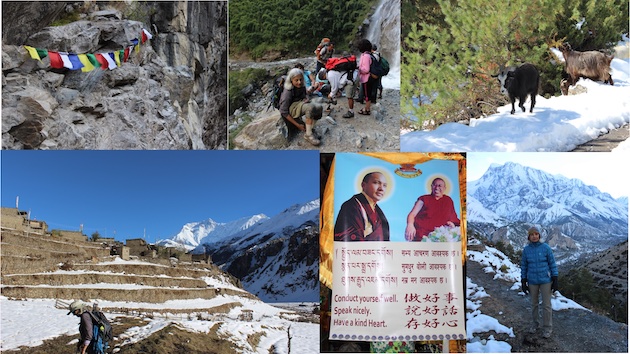 When we got back from that trip, I wrote 22 poems.

Here’s one of them:

In a time before people,
Earth’s landmasses clumped together—
a supercontinent
breaking slowly apart
over millions of years.

Europe and Asia to the north,
Australia to the south
and India an island in between—
the restless continents
pushed and jostled,
buffeted by tides of molten rock
from deep within the earth.

Pushed up by surging waves of lava,
bulldozed by unstoppable India from the south,
mountains rose: the Himalaya,
chain upon chain of giant peaks
stretching over a thousand miles
across the Asian continent.

And among them
one,
the highest of all.

Leaving two cubs
in her mountain cave,
the snow leopard watches the sky,
flares her nostrils to the wind.
She paces the ground,
marks the rocks—
a scrape of her whiskered cheek,
a shower of pee—
leaving a smelly signature to say,
This is my place.

She sees the blue sheep
munch its way down the mountain.

She stretches, sniffs,
stalks
him
with care.

A crouch, a wriggle, a running leap—
and
she
pounces!

On this cold night,
her cubs will eat.

Writers should beware of unthinking affection for their own words. The poems didn’t hold together. They were not a picture book. The fabric that connected them for me consisted of my reading and my excitement at delving into this material. I cared. But that wasn’t enough to give weight to the whole thing.

In the end, it was Nan Froman, editor at Groundwood, who said she wasn’t sure about the collection but found one poem, The Summit, very effective. She wondered if it could be developed into a picture book with a note at the end containing information about Mount Everest. So that is what happened. I took that poem and spaced it out over 32 pages.

I ended up distilling the information in the other 21 poems into the back matter. Everything went in there—the height of the mountain, its naming, the formation of the range, the wildlife, the people, Hillary and Norgay’s expedition, climbers’ trash, the effects of climate change. It’s all there.

Here’s the thing. Writing all those poems made my prose pointed, spare, precise. The process shows me that diversions and detours are as important in writing as they are in travel. And as in climbing, there are no shortcuts. 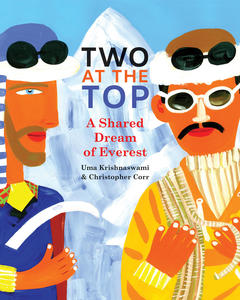 Learn more about Two At the Top:

Tenzing Norgay and Edmund Hillary each tell their story, culminating in their thrilling ascent of Mount Everest.

Tenzing Norgay grew up in Nepal, herding yaks in the shadow of Chomolungma, the mountain also known as Everest. He has always dreamed of climbing to the top. He becomes a guide, leading treks through the Himalayas, and finally attempts the highest mountain himself, but doesn’t make it.

Across the ocean, in New Zealand, Edmund Hillary grew up tending his father’s bees. He climbed his first mountain at sixteen and has climbed all over the world ever since. He tries Everest, with no success.

In 1953, the two men set out on the same expedition to climb Everest. Their party numbers four hundred, counting all the guides and porters. But the climb is grueling, and eventually Norgay and Hillary are the only two determined to continue. They tramp over windswept glaciers, crawl across rope bridges, hack footholds in the ice … until finally they reach the top of the world!