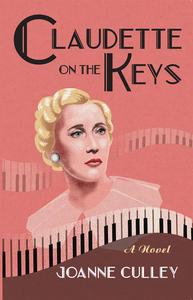 "Music and hope navigate the treacherous waters of the pre-war period in this detailed, well-researched novel about perseverance and the power of self-discovery," writes bestseller Genevieve Graham about Claudette on the Keys, the debut novel by Joanne Culley.

In this list, Culley recommends her own favourites by Genevieve Graham, along with other historical fiction gems.

About the book: This fictional account of the Barnardo Home Children is based on true stories discovered during the author's interviews with former Barnardo children who came to North America from the British Isles as well as their descendants.

About the book: A gripping book about a relationship between a young boy and an older free-spirited man on the prairies after the Second World War, with vivid descriptions of the landscape and small-town life.

The Pull of the Stars, by Emma Donoghue

About the book: A prescient tale written before the current pandemic about the Spanish flu in Dublin, Ireland, more than 100 years ago. A tender love story of a nurse whose love for her patients and a younger aid shines through the bleak days.

The Gown, by Jennifer Robson

About the book: An excellent, dramatic read that gives a behind-the-scenes look into the post-war world in London leading up to Princess Elizabeth's wedding and the making of her gown by the famed designer Norman Hartnell.

A Russian Sister, by Caroline Adderson

About the book: A Russian Sister is an amazing glimpse behind the scenes of the famous author Anton Chekhov's personal life—his family, his loves, his medical career and his writing—through the lens of his younger sister, Masha. The story is based on Chekhov's letters, stories, and plays, and Adderson brings to life this period in 19th-century Russia with larger-than-life characters.

About the book: A meditative look at what it means to leave one's stamp on the earth from the point of view of Giuseppe Tomasi di Lampedusa, a nobleman left without a fortune due to the Second World War. His legacy is the book he toils over throughout the novel, The Leopard, which isn't published during his lifetime, but which becomes a classic in Italian literature posthumously.

The Boy in the Field, by Margot Livesey

About the book: An intriguing tale of three siblings who come to the aid of an assault victim. The book explores the effects the incident has on each of their lives; each sibling reacts differently, and the ramifications carry on through many years.

Letters Across the Sea, by Genevieve Graham

About the book: Graham’s latest book, Letters Across the Sea, highlights a little-known period in Canadian history, during the Great Depression, when anti-Semitism was on the rise. The story follows the lives of two young friends—Max and Molly—who experience its effects both personally and in the society around them. The infamous riot in Christie Pits in Toronto, where Jewish people were targeted in a hateful attack, is the pivotal moment that drives a wedge between the two friends. Max goes on to become a doctor in the Pacific during the Second World War, while Molly becomes a reporter at the Toronto Star. It's a timely tale for today, given the rise of white supremacy and racial prejudice, told through the lens of the past.

Learn more about Claudette on the Keys:

Claudette on the Keys is about a female pianist who follows fortune but instead finds fascism on the rise in this tale of intrigue in pre-war times. Inspired by true events, it’s the story of Ida, whose stage name is Claudette, and her husband Harry, a Toronto-based duo-piano team, who are struggling to find employment in 1936 after being laid off from their radio show. Following a solo performance at Shea’s Theatre, where Ida performs a stellar rendition of George Gershwin’s “Rhapsody in Blue,” she is invited by a British talent agent to work overseas where she becomes embroiled in a scheme to get Jewish musicians out of Germany, passport problems and imprisonment. With a mixture of real and imagined characters, Culley provides a glimpse into the show business world of pre-war Europe through the eyes of a spunky heroine. A must-read for fans of Letters Across the Sea, by Genevieve Graham, and The Lost Girls of Paris, by Pam Jenoff.