This week we’re in conversation with Griffin Poetry Prize winner Jordan Abel, whose powerful poetry project NISHGA was released over the summer with McClelland & Stewart.

Author Billy-Ray Belcourt says “Abel sculpts a narrative of dislocation and self-examination that pressurizes received notions of “Canada” and “history” and “art” and “literature” and “belonging” and “forgiveness”… By its Afterword, NISHGA adds up to a work of personal and national reckoning that is by turns heartbreaking and scathing.”

Jordan Abel is a Nisga'a writer from Vancouver. He is the author of The Place of Scraps (winner of the Dorothy Livesay Poetry Prize), Un/inhabited, and Injun (winner of the Griffin Poetry Prize). Abel's work has recently been anthologized in The New Concrete: Visual Poetry in the 21st Century (Hayward), The Next Wave: An Anthology of 21st Century Canadian Poetry (Anstruther), Best Canadian Poetry (Tightrope), Counter-Desecration: A Glossary for Writing Within the Anthropocene (Wesleyan), and The Land We Are: Artists and Writers Unsettle the Politics of Reconciliation (ARP). Abel's work has been published in numerous journals and magazines—including Canadian Literature, The Capilano Review, and Poetry Is Dead—and his visual poetry has been included in exhibitions at the Polygon Gallery, UNIT/PITT Gallery, and the Oslo Pilot Project Room in Oslo, Norway. Abel recently completed a PhD at Simon Fraser University, and is currently working as an Assistant Professor in the Department of English and Film Studies at the University of Alberta where he teaches Indigenous Literatures and Creative Writing. 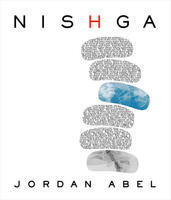 Trevor Corkum: NISHGA is a powerful and deeply personal work. Why was it important for you to explore this story at this moment in your life?

Jordan Abel: NISHGA is a book that I’ve been trying to write my whole life. Trying and failing to write, perhaps. It took me a long while to not only be able to articulate the questions that I was trying to ask, but also to gesture towards what those answers might look like. I think it’s a timely book only in the sense that it was overdue. The issues that I’m thinking through here are old ones that persist. What does it mean to be Indigenous? What does it mean to be Indigenous but to be dispossessed of both traditional land as well as traditional Indigenous knowledges, language, culture, etc.?

TC: The book grapples with the fallout and devastation of ongoing colonial violence, on individual lives, families, and collective cultures. Whom do you most hope the book reaches, and what do you most hope readers take away from the book?

JA: As I write at the beginning and end of the book, NISHGA is for all my relations. Those that I know. Those that I don’t know. For a long time I struggled (and perhaps continue to struggle) with understanding just how deeply the legacy of Indian Residential Schools impacted my family and also me personally. It’s a devastating legacy. And it’s one that for me was experienced partly through disconnection and loneliness. I genuinely hope that people who have similar experiences, similar backgrounds, etc., will find this book helpful in some small way.

TC: Structurally, the book is completely hybrid, unlike anything I’ve read: erasure, testimony, transcripts, visual art, still shots of web pages and more. Can you talk more about the structural choices you made putting the book together?

JA: There is a long answer to this question that I don’t think I have the space for here. But the short answer is that this is a problem-based text where the problem is finding a way to address the complexity of intergenerational trauma and the afterlives of Residential Schools. These subjects are so difficult and so complicated. The only way that I could imagine tackling them was by trying my best to provide as many ways in to those subjects as I could. So that process of switching gears between genres, between documents, etc was my best attempt to address those subjects in all their fullness, with all their nuances, with all their ragged edges.

TC: This is your first work following your Griffin Prize-winning collection Injun. Did anything about winning that award change your practice or how you make art?

JA: Yes and no. When I won the Griffin for Injun I was already deep in the process of writing NISHGA. So the foundations for the book were already built so to speak. But the award did change things for me. I think, amongst other things, it gave me some credibility. After that moment, I think it’s fair to say that more folks were willing to listen, to read etc. NISHGA is a difficult book that contains many genres and I can imagine a world where people might not have time for NISHGA if my previous work hadn’t been recognized in that way. That being said, I think the book would have been more or less the same. At least in the way I imagined it.

TC: Is there a particular question no one has asked yet about the project that you wish someone would ask? How would you respond?

JA: There is an early draft of this book that contains a screenshot of Darth Vader! And I was always a bit sad that I cut it. It comes from a section of the book on page 143 where I talk about different forms of conceptualism including this project where a person alphabetized every instance of each word in the original Star Wars movie. I love the project and I think it’s super rad and I showed a clip from that project during at talk at DHSI in 2018.

In my original transcription of this section, I included that screenshot. Nobody has ever asked me about it. But at one point Darth was in the book. That’s it. Here’s the video.
**

I remember being outside of a Broadway restaurant on a slushy night in Vancouver for a staff Christmas party. I wasn’t really invited to the party, but my friend had insisted. So my friend and I were outside smoking, and some of his friends from work were there, and some of their friends too. We were talking and laughing. The food had been excellent and there was more than enough booze to go around. At some point, one of the friends of friends turned to me. She said, “Where are you from?” I told her that I was from the mountains. I had been living in the interior for a few months now, and since I no longer felt like a Vancouver resident, it made sense to me as an answer. “No, no,” she said, “Where are you from?” I told her that I was from Vancouver. “No, I mean, you’re Indigenous, right?” I told her yes. “So where are you from?” I can’t remember if I had known what she was getting at, or if I was just waiting for her to clarify what she meant. But now I knew the answer she wanted to hear. “I’m Nisga’a,” I said. “My grandparents were from Kincolith.” I don’t know how many times I’ve had to give that answer, but every time I do I can’t help but feel like it’s the only right answer, even though I’m not so sure that it is.

Excerpted from NISHGA by Jordan Abel, published by McClelland & Stewart, an imprint of Penguin Random House Canada. Copyright © Jordan Abel, 2020. Reprinted by permission of the publisher.