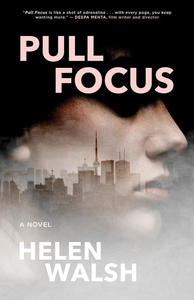 Helen Walsh’s debut novel Pull Focus—a feminist thriller set behind the scenes at an international film festival—publishes September 7 in North America and October 7 in the UK.

Autumn’s long shadows cut across the darkening sky. A director frames a close-up shot of a woman in an armchair clutching a book, legs curled up beneath her, half-drunk glass of Pinot Noir on the side table. The crackle of the fire makes her jump, as her eyes dart from the page out the bare window, and back again. What lurks outside? Waits upstairs? Under the bed, perhaps. . .

Is there anything more delicious than a chill up the spine as nights grow longer and shadows lurk?

Here are 10 novels full of crackling tension that crowd my beside table or will soon, once their publication date arrives.

Everything Turns Away, by Michelle Berry

I was a film producer living half-time in lower Manhattan when September 11th blew up life as I knew it. Cataclysmic events shake our very foundation, prompting us to look at the world, and those closest to us, through greater clarity—or increased suspicion. Berry’s new domestic thriller, set in Toronto, dissects two couples whose lives fall apart when their neighbour is murdered, their babysitter goes missing and the World Trade Centre collapses.

The Keening: A Mystery of Gaelic Ireland, by Anne Emery

Of all the things that Covid stole, the most precious to me was the time I spend in Ireland each year—where my father is buried and much family remains. Ireland holds its secrets close and its grievances forever; a land so packed with history that the veil between centuries feels thin at best. This historical mystery—which slips between 16th century Enniskillen where Sorcha is murdered for the prophecies she foresees, and the present day—is sure to supply my missing Gaelic fix.

Nothing But Blackened Teeth, by Cassandra Khaw

Ever gone to a destination wedding and it turns out the venue is built on top the bones of a bride, and the walls are packed with the remains of those sacrificed to keep her company? Me either, but ever since my older sister forced me to watch The Haunting when I was young, I’ve been a sucker for haunted house stories. Mix in Japanese folklore, a parade of demons and wedding guests with more secrets to reveal than a Ouija board, and you’ve got a hugely original novella from Montreal’s Cassandra Khaw.

The Almost Wife, by Gail Anderson-Dargatz

Anderson-Dargatz’s books (A Recipe for Bees and The Cure For Death By Lightning) have won accolades and topped bestseller lists, and this domestic thriller set on Manitoulin Island promises to do the same. Kira’s perfect new life with the man of her dreams and their blended family threatens to unravel when his ex-wife spirals out of control and her past trauma reverberates. I love a strong, flawed female protagonist, and an author confident enough to write across genres and expectations.

The Retreat, by Elisabeth de Mariaffi

I wonder how many artists have gone to Banff and wanted to kill their fellow inmates? Err, artists-in-residence. In this locked room mystery set in a mountain arts retreat, some-one is mowing them down. Add to that intriguing premise a power outage, an avalanche, and the brooding winter, and you get a darkly atmospheric novel by this Newfoundland-based writer.

More fantasy than mystery, Yume tells the story of Cybelle, an English teacher in a small Japanese city who loves her job but is ostracized by the society around her. Everything in her day-to-day life begins to slide, including her ability to conform to rules that once held her in place. Yokai (supernatural entities in Japanese folklore) cavort, as the barriers between worlds dissipates. Cybelle is forced to confront her desires in this cinematic and terrifying story about a collision of cultures and the human urge for connection.

After 18 months of pandemic lockdown, it’s no wonder that domestic thrillers about the strangers we get into bed with each night, compel. In Fielding’s latest, a deadly shooting on a quiet suburban Florida cul-de-sac blows up the secrets harboured by five families. With lots of character backstory and multiple narrative voices, this psychological suspense novel is sure to satisfy her huge following and garner new readers as well.

I’ve always been slightly creeped out by Bonhomme, or indeed any large, costumed figure. Their pasted-on cheerful expression seems destined to hide something sinister. Carnaval is fun with an edge, especially when you add in masked revelers, too much alcohol and too little inhibition. The third in Dowdall’s Ashley Smeeton series, set in Paris and Montreal, follows the private investigator’s assignment to rescue a damsel-in-distress, only to find out that things are not at all what they seem.

The Hunted, by Roz Nay

For fans of Ruth Ware, this seductive thriller by BC’s Roz Nay follows two couples who meet backpacking though Africa. Fresh starts and geographic cures are not always what they’re cracked up to be, as Stevie Erickson finds out after reluctantly following her boyfriend to a secluded island off the coast of Tanzania. The other couple, Leo and Tasmin, seem nice enough at first, but the friendships are soon put to the rest by flirting gone too far, and the resurfacing of past truths that expose a killer in their midst.

State of Terror, by Louise Penny and Hillary Rodham Clinton

I’m a devoted fan of Penny’s Three Pines series, and this autumn is an embarrassment of riches with two books by Penny—the 17th Inspector Gamache book and this stand-alone novel written with Hillary Clinton which is coming in October. The protagonist Ellen Adams, newly appointed US Secretary of State (naturally), is faced with an international chess game involving terrorist attacks, the development of nuclear weapons in the Middle East, Russian mobsters and a hostile, incompetent US president, despised the world over. Sound familiar?

When Jane’s partner goes missing she needs to find out if he’s in danger while also contending with the politics of a large international film festival: Hollywood power brokers, Russian oil speculators, Chinese propagandists, and a board chair who seemingly has it out for her.

Jane has been appointed interim director of the Worldwide Toronto Film Festival after her boss has been removed for sexual harassment. Knives are out all around her, as factions within the community want to see her fail. At the same time, her partner, a fund manager, has disappeared, and strange women appear, uttering threats about misused funds. Yet the show must go on. As Jane struggles to juggle all the balls she’s been handed and survive in one piece, she discovers unlikely allies and finds that she’s stronger than she thinks.