Storyteller and author Ivan Coyote’s latest work, the nonfiction collection Care Of (McClelland & Stewart), is a moving meditation on care and community. Penned during the early months of the pandemic, the book is a collection of notes and letters from audience members to Ivan and their deeply compassionate responses to these letters.

The Star calls the book “strong medicine, best taken in measured doses, and a vital reminder of the value not only of connection, but of every story, every voice.”

Ivan Coyote is a writer and storyteller. Born and raised in Whitehorse, Yukon, they are the author of thirteen books, the creator of four films, six stage shows, and three albums that combine storytelling with music. Coyote’s books have won the ReLit Award, been named a Stonewall Honour Book, been longlisted for Canada Reads, been shortlisted for the Hilary Weston Prize for nonfiction, and awarded BC and Yukon Book Prize’s inaugural Jim Deva Prize for Writing that Provokes. In 2017 Ivan was given an honorary Doctor of Laws from Simon Fraser University for their writing and activism.

**
Trevor Corkum: In Care Of, you respond to letters, notes, and emails from a range of folks who’ve written deeply personal messages to you over the years. When and how did you imagine this project becoming a book? 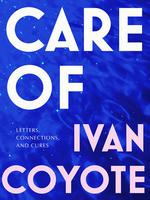 I didn’t imagine it as anything other than finally having time to catch up on my correspondence at first. I checked my calendar, and during the waning days of March 2020, when we were all grappling with the early lockdown times and scrambling to find toilet paper and masks, I did an online panel discussion on queer memoir. It was an American thing, mostly, with writers like Michelle Tea and Alexander Chee, and Samra Habib was on it, and she had recently won Canada Reads, I think, and after the panel was done the host, Cameron Esposito, asked all of us which of our books people should buy and I just said “hey, write me a letter? I’ve been answering mail this month and it’s really helping me feel connected to other people, so write me a letter, and a couple of days later I got an email from a publisher asking me if I would consider putting these letters together, if I thought it might work as a manuscript, and it all sort of happened from there. I was already talking to Jared Bland at M and S about the mystery novel I’m working on, and my agent Rachel Letofsky is a total dream and she parlayed it into the two-book deal I signed with M and S.

TC: From reading these powerful messages, it’s so clear that so many folks are deeply moved and comforted by your performances and stories. How does it feel to be such a trusted confidante?

IC: It’s a complicated thing, that. I get a lot of mail, sometimes containing hard stories, and trauma. I am grateful that the process of writing these letters taught me so much about the importance of the long conversations. The vital process that is the considered response. I will never be able to write all the letters I want to, but I continue to be honoured and awed by the way my stories shake loose stories and letters from other people. I see it as a very sacred exchange.

I am grateful that the process of writing these letters taught me so much about the importance of the long conversations.

TC: In your responses, I was struck by your deep and abiding empathy and willingness to grapple honestly with different points of view. How difficult was it to craft your replies?

Some responses took me weeks or months to ponder, and each letter took me between three to seven days to write. I took long walks. Long showers. I cried a lot, but in a good way. I wrote about tears even. How we shame them and shut them down, still, even to this day, even among our deeply traumatized trans communities. Writing this book changed me in fundamental ways, and for that I am ever grateful.

TC: In what ways has the pandemic—and this project—changed how you consider or understand your relationship to your audience, and to the concept of care more generally?

IC: I have thought long and very hard about this. I’m never going back to touring like I did for decades, pre-pandemic. I’m not going to allow myself to be non-consensually hugged or touched in book signing line-ups any more, just because someone bought a book with my name on it. I’m going to prioritise my family and relationships more. I’m moving home to the Yukon to take care of my father who has dementia. I’m building a cabin in the bush 100km away from a cell signal. Everything has changed for me.

TC: What do you most hope readers take away from the book?

I want everyone who reads this book to sit down and write someone a very long letter. A long, careful, loving and compassionate letter. Preferably to someone that they love and need to mend something with. I hope this book helps heal some rifts, and forge some new and tender skin over an old scar.