How do you create a sense of satisfaction in a story’s finale? The following books pull it off by covering the gamut of techniques—concluding with an important action or image, repeated text, dialogue, or one final word. Some come full circle with whole story reminders.

Reading aloud just the beginning and final sentences of each book allows students to feel the full impact of each type of ending. 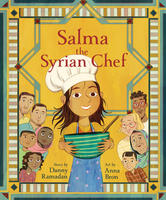 Salma and the Syrian Chef, by Danny Ramadan, illustrated by Anna Bron, begins with Salma, in Vancouver, missing the rain in Syria. She longs to hear her mom’s laugh again, likening it to the sound of bicycle bells in the streets back home. She tries making a Syrian dish but her attempts to buy ingredients are thwarted by her lack of English. Salma “feels like an umbrella in a country with no rain,” so she draws her list of vegetables for the grocer instead. Then she draws a picture of her home, making it purple because “it’s okay to add new colours to my memories.” The final image in the book is that of a bike ride with her new friends (other refugees from the Welcome Centre), ringing their bells beneath a purple sky. 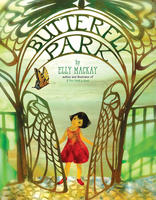 Butterfly Park, by Elly MacKay, starts out with a little girl, sad to move from the country to the city—she’s going to miss the butterflies! Next to her new house is a butterfly park…but where are the butterflies? She tries catching some, enlisting neighbourhood children to help. They follow one butterfly through town, gathering a parade of interested neighbours to discover what they’re missing—flowers. The final image is that of an active community garden, the girl’s new life now filled with butterflies and friends: “In time, the girl felt not only felt lucky, she also felt right at home.” 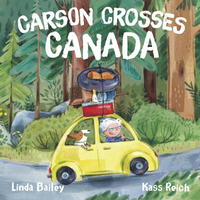 Carson Crosses Canada, by Linda Bailey, illustrated by Kass Reich, is the story of Annie and her dog, Carson, setting off on a cross-Canada visit to Annie’s sister. They camp in the Rockies, visit the Badlands (those bones!), discover the sky-filled Prairies, then head to Niagara Falls and Quebec City. When they reach the Atlantic Ocean, Carson meets his (surprise!) brother Digby. The final words: “They loved the salt air. They loved the red house. And they loved their sweet time together,” which is how the book begins. There’s also a handy map charting Annie and Carson’s journey. 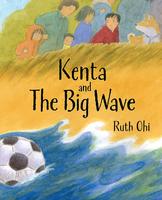 Kenta and the Big Wave, by Ruth Ohi, is about the tsunami in Japan. Kenta hears the warning siren and runs to school, up the hill high above the waves but he trips and his soccer ball rolls away. Families safely gather in the school gym before returning to find their homes devastated. Every day they search for their belongings. Kenta makes a new ball out of scraps while his old soccer ball bobs across the the ocean to a child who discovers Kenta’s address. We see the ball travel in a box via plane, truck, bike, back to Kenta, who ends the story with, “Thank you!” 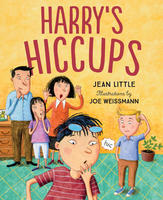 Harry’s Hiccups, by Jean Little, illustrated by Joe Weissmann, ends with a final word of dialogue. With a bad case of the hiccups, Harry is offered a number of solutions by family members and neighbours—drink water; drink water upside down; hold your breath; drop a cold brass key down your shirt. Finally a run-in with a green frog scares the hiccups right out of him. As he leans in to tell the frog he’s cured, the final word belongs to the frog, “Hiccup!” 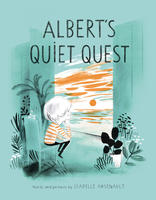 A full circle finish uses an image, text or action from the story’s beginning. Albert’s Quiet Quest, by Isabelle Arsenault, with its panels and speech bubbles, begins with Albert taking refuge from his noisy house in the alleyway. There, he finds an abandoned painting of a beach and, armed with a book, sets himself up in a chair across from the serene picture. The neighbourhood kids all try and engage him in their activities…gardening, cat-minding, badminton. Albert incorporates them into his beach dreamscape until the chaos becomes overwhelming. He just wants to read his book! Albert yells for everyone to leave before discovering it’s lonely “on the beach” without his friends. 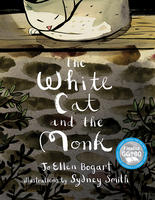 The White Cat and the Monk, by Jo Ellen Bogart, illustrated by Sydney Smith, also uses a comic book panel format. It begins with Pangur, the cat, slinking into the monastery room he shares with a monk. While the monk hunts for knowledge in beautifully illuminated texts, Pangur studies the mouse hole in the wall. Both lead quiet, contented lives. Whilst the cat catches his mouse, the monk “find(s) light in the darkness.” The reader can only conclude this refers to the white cat. The afterword explains the tale’s origin, based on an old Irish poem called Pangur Ban, about a Benedictine monk and his cat.

The conclusion of Mr. Hiroshi’s Garden, by Maxine Trottier, illustrated by Paul Morin, poignantly pulls together each story thread. Set during World War II, Mary stays with her grandmother in B.C. one summer, becoming friendly with the next door neighbour, Mr. Hiroshi. He works on his ever-evolving rock garden with its pond full of koi. “Such things take time, but then a garden has to start somewhere,” he tells Mary. When Mr. Hiroshi is taken away to an internment camp, Mary tends his garden, and when his house is sold, she releases the koi into the Pacific Ocean, hoping they’ll find their way back to Japan—also her wish for Mr. Hiroshi. She returns to the prairies “where the wheat rippled like golden waves in a vast sea,” and plants two irises, as well as a flat stone taken from Mr. Hiroshi’s garden. “It was a small thing, but a garden had to start somewhere.” The afterword reveals the author’s full-circle wish: “Perhaps this story will plant the seed of peace…”