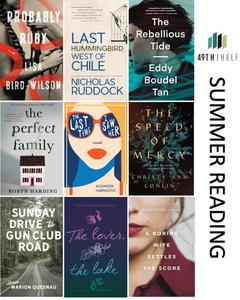 Our summer reads extravaganza continues with PART 2 of our Summer Books List, and once again, each and every title is up for giveaway. Nine books at five giveaways each means FORTY-FIVE (45!) books up for grabs, so the odds are good, and the goods are AMAZING.

And if you can't wait, pick up these titles from your local bookstore or library shelf just in time for the long weekend!

About the book: For readers of Tommy Orange's There There and Terese Marie Mailhot's Heart Berries, Probably Ruby is an audacious, brave and beautiful book about an adopted woman's search for her Indigenous identity.

Relinquished as an infant, Ruby is placed in a foster home and finally adopted by Alice and Mel, a less-than-desirable couple who can't afford to complain too loudly about Ruby's Indigenous roots. But when her new parents' marriage falls apart, Ruby finds herself vulnerable and in compromising situations that lead her to search, in the unlikeliest of places, for her Indigenous identity.

Unabashedly self-destructing on alcohol, drugs and bad relationships, Ruby grapples with the meaning of the legacy left to her. In a series of expanding narratives, Ruby and the people connected to her tell their stories and help flesh out Ruby's history. Seeking understanding of how we come to know who we are, Probably Ruby explores how we find and invent ourselves in ways as peculiar and varied as the experiences of Indigenous adoptees themselves. Ruby's voice, her devastating honesty and tremendous laugh, will not soon be forgotten.

Probably Ruby is a perfectly crafted novel, with effortless, nearly imperceptible shifts in time and perspective, exquisitely chosen detail, natural dialogue and emotional control that results in breathtaking levels of tension and points of revelation.

About the book: Sebastien’s search for his father leads him to a ship harbouring a dangerous secret.

Sebastien has heard only stories about his father, a mysterious sailor who abandoned his pregnant mother thirty years ago. But when his mother dies after a lifetime of struggle, he becomes obsessed with finding an explanation—perhaps even revenge.

The father he’s never met is Kostas, the commanding officer of a luxury liner sailing the Mediterranean. Posing as a member of the ship’s crew, Sebastien stalks his unwitting father in search of answers as to why he disappeared so many years ago.

After a public assault triggers outrage among the ship’s crew, Sebastien finds himself entangled in a revolt against the oppressive ruling class of officers. As the clash escalates between the powerful and the powerless, Sebastien uncovers something his father has hidden deep within the belly of the ship—a disturbing secret that will force him to confront everything he’s always wondered and feared about his own identity.

The Speed of Mercy, by Christy Ann Conlin

About the book: “Dark family secrets, the lore of the sea, and a tender, protective friendship between women all converge in The Speed of Mercy, an unusual and surprising story set in idyllic rural Nova Scotia. With subtle humour, Conlin picks the locks on the long-closed doors of two families and bares the ugly, painful skeletons everyone knew were there but chose to hide.” — Sylvia D. Hamilton,  author of And I Alone Escaped To Tell You

The Speed of Mercy captures the unbearable cost of childhood betrayal and what happens when history is suppressed, our past is forgotten — yet finding the truth can change the future. Christy Ann Conlin rips into the myths and stereotypes about older women and those on the edge of conventional society to reveal the timeless gift of mercy in this feminist tour de force.

The Perfect Family, by Robyn Harding

About the book: In The Perfect Family—which has received starred reviews from both Publishers Weekly and Booklist—#1 bestselling author Robyn Harding explores what happens when a seemingly perfect family is pushed to the edge...and beyond.

Thomas and Viv Adler have a picture-perfect family. Affluent and attractive, with two well-mannered kids almost out of the nest, they live in a beautifully restored Craftsman house in a well-to-do neighborhood in Portland, Oregon. Their jobs are secure; their children are thriving; the world is their oyster.

Until one morning, when they wake up to find that their house and car have been pelted with eggs. Thomas dismisses it as the work of a few out-of-control kids, but when a smoke bomb is tossed on their front lawn, and the tires on their BMW are punctured, he begins to worry. The family installs surveillance cameras but they show nothing but grainy images of shadowy figures in hoodies. Unable to identify the perpetrators, they are helpless as the assaults escalate. The police assure them that this is just the work of bored teenagers. But no one in the Adler family believes it. After all, each of them has a secret—kept not only from the outside world but from each other.

Seventeen-year-old Tarryn is dabbling in a seedy online world; her older brother, Eli, has dropped out of college and refuses to tell his parents why; and Thomas and Viv have their own secrets that began as harmless fun and relief from the pressures of everyday life, but have grown into something darker and more dangerous. As the Adlers grapple with their guilt, fear, and shame, the assaults grow deadly. Their “perfect” façade is crumbling, and it may be too late for any of them to do anything about it in this addictive and twisty suspense novel that will keep you turning pages until its explosive ending.

The Last Time I Saw Her, by Alexandra Harrington

About the book: Friends and family are pitted against each other after a tragic accident leaves behind shattered relationships and shocking secrets. A riveting novel by a new voice in teen fiction.

It's been almost a year since Charlotte Romer set foot in her hometown of River John, Nova Scotia. She's been living at a boarding school hours away, safe from the trauma and broken relationships she left behind. All she has left in the small town is her older brother, Sean, who is struggling to keep the lights on in their run-down family home. Charlotte hasn't spoken to her best friend, Sophie, since the night she fled. It's not exactly a celebratory homecoming.

On her first night home, Charlotte shows up unannounced to Sophie's eighteenth birthday party. The trickle-down effects of that decision haunt Charlotte for weeks. But when Charlotte reconnects with Sophie's ex-boyfriend, Max, the two of them begin to slowly unravel what happened the night of the accident the summer before—the night that changed everything. Somebody knows something, and that somebody really doesn't want Charlotte and Max to figure it out.

With a fast-paced, high-stakes plot, Alexandra Harrington's debut YA novel will leave readers breathless until the final, shocking conclusion.

A Boring Wife Settles the Score, by Marie-Renee Lavoie, translated by Arielle Aaronson

About the book: The eagerly anticipated sequel to the critically beloved and bestselling Autopsy of a Boring Wife finds the saucy and ever-appealing Diane, now turning fifty and with the wreckage of her marriage behind her, setting off on a new hilarious journey for romance.

A Boring Wife Settles the Score marks the return of Diane, the raunchy and entertaining heroine of the prize-winning and bestselling Autopsy of a Boring Wife. Despite the end of her marriage, Diane still has plenty of love to give. Determined not to waste her days—that’s just not her style—she finds a job in a daycare and solace in cocktails with her best friend, Claudine, who convinces Diane her love life is not over. Diane wants romance and sees no reason why she shouldn’t have it, but she soon discovers, in her typically chaotic and hilarious manner, that for a woman approaching her fifties the task is not so simple as it is for a man.

The Lover, the Lake, by Virginia Pesemapeo Bordeleau, translated by Susan Ouriou

When it was first published in Quebec, The Lover, The Lake was heralded as the first erotic novel written by an Indigenous woman in French. Today, as it is translated into English for the first time, author Virginia Pesemapeo Bordeleau would rather call it a celebration of sensuality, another first. At a time when Indigenous peoples were being dispossessed of their land and history as well as their relationship to the body, the love explored by Wabougouni and Gabriel is an act of defiance. Their intimate connection plays out on the shores of Lake Abitibi in an affair as turbulent and unfathomable as the lake itself.

"The aim here is to break free of the bonds of wounds the priests' abuse has left on our bodies and souls, wounds linked to loss--of land, of intimate spaces, of identity both as an individual and community member, of sexual identity, of delight in the body, of innocence and the uncomplicated nature of lovemaking. My hope is that this novel will serve to unearth the seed of joy buried deep in our culture, still profoundly alive . . . The Lover, the Lake shows us that we are not just suffering and victims: we can also be pleasure." —Virginia Pesemapeo Bordeleau, from the prologue

About the book: In her debut short story collection, Quednau offers unsettling examinations of “what really happened” with rich, complex characters that might equally arouse our suspicions or sympathy: we pay attention. She gives voice to the interludes between actions, what almost occurred, or might yet, the skewed time of “before” and acute reckoning of “afterward.”

Seemingly innocent gestures leave their marks in comeuppance: the blurt of an intimate nickname becoming an ad hoc striptease in a public place, a parked car leading to a woman flailing in a dunk tank, a garage sale with no early birds ending in vengeance, the redemptive act of shucking corn with an ex-husband’s new lover transforming into greater loss. These stories attest to Quednau’s belief that the most significant moments in our lives—the things that alter us—lie in the margins, just out of sight of what was once presumed or predicted. In these short fictions timing is everything, the rusted twentieth-century myths of ownership or conquest are set against the incoming reality of pandemic, our separate notions of love or of courage, of painful transformation, yet to be believed.

About the book: An audacious tale of murder, privilege, and servitude—of both humans and nature.

A stunning work of imaginative fiction, Last Hummingbird West of Chile spins a tale of adventure that is in turn comedic, violent, poignant and thoughtful. Through the exploits of a young sailor born in questionable circumstance and a pair of murderous servants, as well as an assortment of other 19th century regulars, the vital subjects of today—race, religion, sexuality, environment—are framed in history and human culture.

Through narration by human protagonists, a tree, a hummingbird, various beasts, and the landscape itself, Ruddock tells a story of colonialism and environment, brutality and privilege, and the best and worst of human nature.