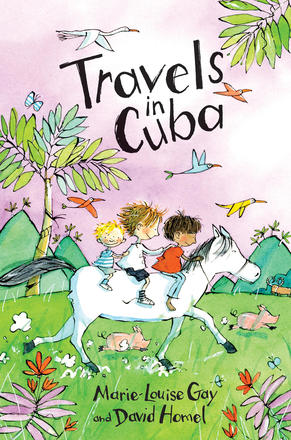 Travels in Cuba, like the other books in the Travels series, was written with four hands. Readers are always curious about how we do this. There is piano music for four hands, so why not books? But do the writers sit side by side as if on a piano bench and write with the same rhythm? What happens if they disagree? We know that creative people are solitary creatures with large egos and a need to control their creative process. So what happens when two very independent authors with very different ways of seeing the world begin working together?

Actually, we were surprised at how smoothly it went. Marie-Louise has worked in children’s theatre, writing plays and designing sets, including large puppets. She knew what it was like to work with a team. The two key ingredients are a dash of compromise and criticism of the constructive kind. And David has worked writing and directing documentary films, and filmmaking is the collaborative form par excellence.

Also, the idea behind the very first book we did, Travels with my Family, came out of our shared experience. These were the family journeys we made together with our two boys. And, of course, we don’t sit side by side looking over each other’s shoulders. As the story is coming together, many, many versions of the manuscript will go shooting from one computer to the other, from one workplace to the other. We print out each draft and make a lot of notes in pencil. Writing is still, literally, hands-on for us.

David did wonder before we started, that since he had done only serious novels for adult audiences, what writing for children would be like. He discovered that writing is writing, no matter the age group. The first issue is the narrator—who will tell the story? The children, or the parents? We knew right away that it wouldn’t be the parents. Kids don’t want to read a story told by their parents. And we didn’t want to write one either. By having the story-teller, the narrator, be the oldest of the two boys (a combination of our two sons), we opened up a whole world of possibilities.

The first issue is the narrator—who will tell the story? The children, or the parents? We knew right away that it wouldn’t be the parents. Kids don’t want to read a story told by their parents. And we didn’t want to write one either.

That’s when we created a character, Charlie, who is not afraid to criticize his parents (actually, both our kids are like that!). His funny and clever voice and acute observations dominate the story. That is why most children will identify with him and be completely involved in the book. Charlie observes and speculates on why his parents are the way they are, and wonders why they have to embarrass him all the time.

We have presented this series of travelling adventures to school children in many different parts of the world. At the end of the presentation we would ask, “Tell us some things your parents do that embarrass you.” The question would turn into a hilarious story festival, with every child eager to share their stories. We realized we had hit on something true and important for kids. They need to be the hero in their own story.

We realized we had hit on something true and important for kids. They need to be the hero in their own story.

Our books have travelled their share, from China to France to Serbia, and in some countries, you don’t question your parents, at least not out loud. We remember reading from our books in Montenegro and it was clear from the students’ reaction that Charlie’s spirit was something new for them. Some wondered if it was all right to laugh at their parents and question their actions. We could see the kids looking at each other—are we allowed to do this?

When we return from a trip, we have to absorb and understand the experience. That can take a while. Months, or years. Often, thinking about a trip and the stories it held seems to happen by itself. Memories simmer quietly, connections are made between places we went to and things we saw. A memory will pop up and start a conversation between us, or with our children or our friends. Or something in our world today will bring back a past event in a faraway place. The story begins to take form. We are beginning a book, even if we don’t know we are.

Marie-Louise always keeps a journal with sketches that inspires some of the stories. Take this page from the rural town of Viñales, in western Cuba, that we wrote about in our latest book. 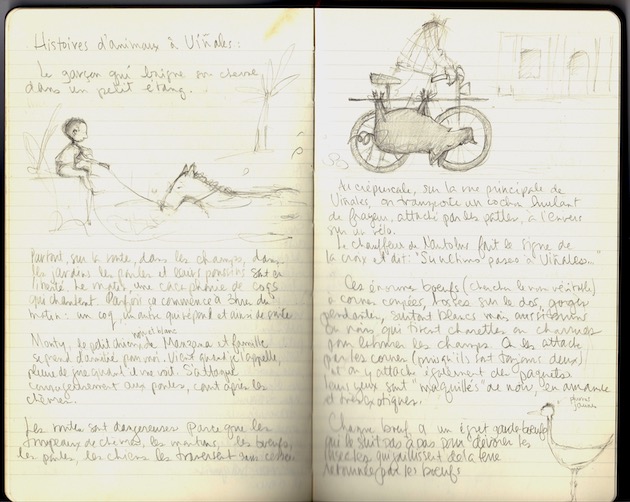 We came across an unusual sight (unusual for those of us who live in North America): an old man was wheeling his bicycle down the main street of Viñales. A small pig was tied upside down on the crossbar of the bike. The pig was squealing unhappily as the sun set, spreading beautiful golden light everywhere. One of the town’s cowboys commented, “Su último paseo en Viñales”—his last trip down main street. There was something both comical (for us) and terrifying (for the pig) that set us off in the direction of a bigger story. Along with the man’s wry smile as he spoke to us, and his sense of humour.

As well as the sketch with a boy washing a horse in a pond...

This is where Charlie pointed out that the boy wasn’t really washing his horse, the horse was washing itself by dipping into the pond. Later, Charlie made friends with the boy, whose name was Lázaro. He showed Charlie all kinds of things about the country that Charlie wouldn’t have found out otherwise. The adventures they have together are among the high points of Travels in Cuba. Because Lázaro is half-Cuban and half-American, he knows about life in both places. He can answer Charlie’s questions about life in Cuba, the things that surprise or confuse him. But most of all, it is a young boy’s point of view that he is sharing with someone his own age, and not an adult voice explaining everything.

That’s what the Travels series is all about: sending a resourceful, observant, unafraid (well, sometimes a little afraid, when a pack of stray dogs runs past him and his brother in Havana or when they encounter the hermit in The Traveling Circus) kid into the world, and letting him learn about it and, most importantly, allowing him to form his own opinions.

When we travelled to Cuba, we decided to stay in people's private homes, share meals with them, travel by bus into the rural and isolated parts of the country and give art workshops to school children in Havana. This way, we met many different Cubans, from tobacco farmers to schoolteachers, musicians, children, and fortune-tellers. We heard many stories about living in Cuba and discovered the resourcefulness, friendliness, and generosity of the Cuban people. We learned about the sometimes-difficult side of life there with its rules and restrictions that seem designed to keep Cubans and foreigners apart.

That’s what the Travels series is all about: sending a resourceful, observant, unafraid (well, sometimes a little afraid, when a pack of stray dogs runs past him and his brother in Havana or when they encounter the hermit in The Traveling Circus) kid into the world, and letting him learn about it and, most importantly, allowing him to form his own opinions.

We observed scenes that would show up years later in our book: children riding their horses to school, people travelling en masse in trucks or pick-ups, the lively conversations from balcony to balcony in the streets of Havana with a background of vibrant music everywhere.

Here are some of our favourite illustrations from Travels in Cuba: 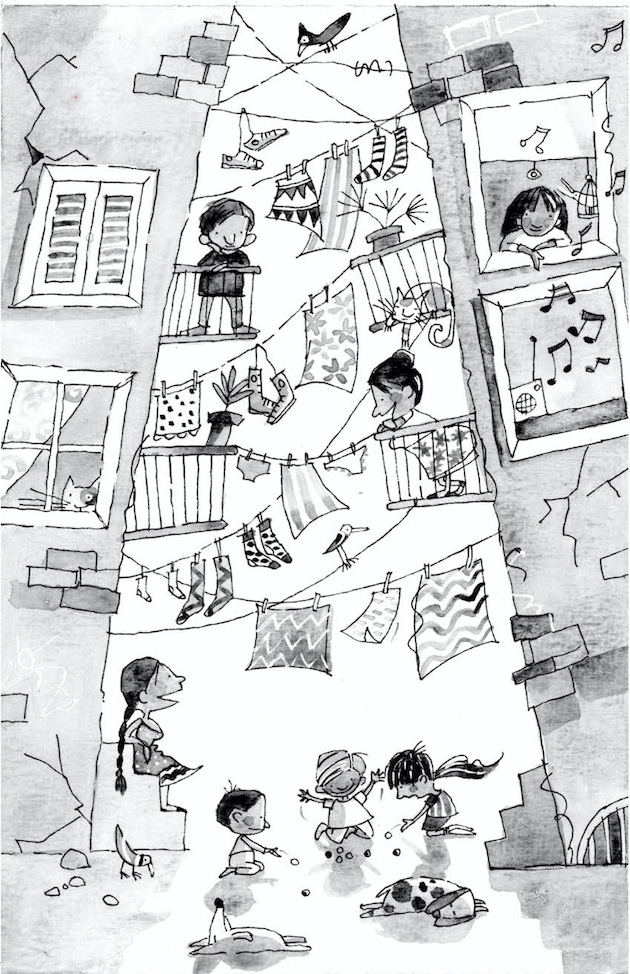 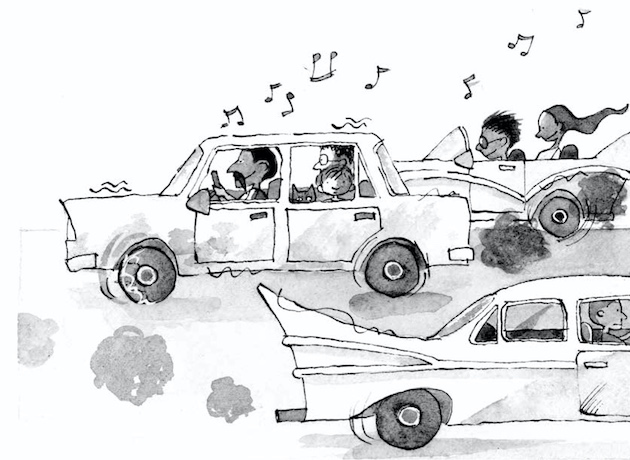 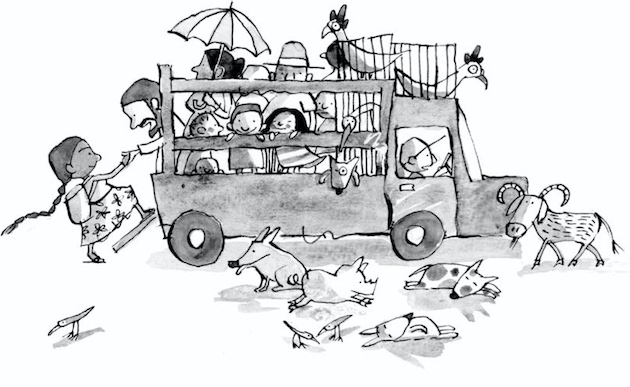