According to the Governor General's Peer Assessment Committee, “Norma Jeane Baker of Troy leverages a millennia-old story of beauty and war to animate a history of the male gaze and the nature of power wielded by privilege. Tracing its origins from ancient and modern forms, the book inquires into the history of language and being. It exposes the uncertainty and vulnerability that underpin our desire for ‘the precision of command.’ The oceanic pull of Carson’s poetry uses irreverence to lure and wreck our concepts of time, place and subject.”

Anne Carson is a Toronto-born poet, essayist, classicist, and translator who has also taught at Canadian and American universities including McGill and Princeton. A Member of the Order of Canada with more than 20 titles to her name, she recently received a Princess of Asturias Award. Throughout her career, Carson’s work has earned her Guggenheim and MacArthur fellowships, two Griffin Poetry Prizes, the T. S. Eliot Prize, and the Lannan Literary Award, among many other honours. Anne Carson now divides her time between the US and Iceland.

Norma Jeane Baker of Troy is a performance piece that draws together Helen of Troy and Marilyn Monroe. For readers unfamiliar with your work, how would you describe this book? 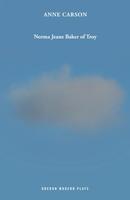 Norma Jeane Baker of Troy is a play formed in the shadow of an ancient Greek play by Euripides called Helen. It has long fascinated me how Euripides was able, in the mid-5th century BC, to take an ancient myth and revolve it 360 degrees so that we are looking at the story and its meaning from the inside out. So he takes the myth of Helen, legendarily the harlot of Troy and destroyer of two civilizations, and says, What if we consider all this from the woman’s point of view? His play gives us a Helen who is not a seductress but a rape victim, not so much concerned with sex or self as with longing for the child she had to abandon when she was snatched away from home.

The emotional focus of Helen’s character is sorrow for her lost daughter, Hermione. Euripides weaves this emotion onto the broader canvas of the Trojan War and the sorrow of war in general. Certainly nowadays we need new ways to think about female icons like Helen or Marilyn Monroe, to find different, deeper sorrows there. At the same time, in Euripides’ play the Helen who went to Troy is a cloud, a phantasm, a piece of fake news. This raises ancient questions, also hotly relevant to our own time, like What is knowledge? Who is to be believed? How can we ever say that we know anything?

Euripides’ Helen is a tragicomedy, a genre he invented. It allows absurdist situations and semi-comic characters to drift downstage into darkness and doubt. In a similar way I tried to let dark realities materialize dimly, through language lessons, in the History of War sections that alternate with narrative/lyric scenes. Language is a way into moral life. I believe in words and their power to clarify belief-systems, even when these systems are confused, contradictory or crazy.

What aspect of the work did you find most challenging?

You’ve been heralded as one of Canada’s greatest poets, and your earlier work has garnered a plethora of awards, including the inaugural Griffin Prize. What does winning a Governor General’s Award mean to you at this particular point in your career?

Nice to be cheered at home.

Are there poets or artists with whom you feel a particular kinship or allegiance, who have moved and inspired your work?