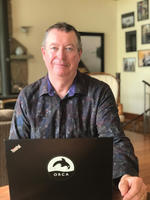 Our final chat in this year’s special Governor General’s Literature Award coverage is with Eric Walters. Eric is the recipient of the 2020 GG's Award for Young People’s Literature (Text) for The King of Jam Sandwiches (Orca Books).

According to this year’s Peer Assessment Committee, "The King of Jam Sandwiches pulls us into the unforgettable friendship of hard-working Robbie and tough-as-nails Harmony in an exceptionally honest survival story that is also compulsively readable and emotionally gripping. Walters has written a heart-wrenching novel about what it is like to grow up amidst poverty and mental illness, one that speaks to contemporary young readers and offers them hope.”

Eric Walters is a Member of the Order of Canada and the author of over 115 books that have collectively won more than 100 awards, many of which have been translated into one or more of 16 different languages. A former teacher, he began writing as a way to get his fifth-grade students interested in reading and writing. Walters is a tireless presenter, speaking to over 100,000 students each year in schools across the country. He has won the Ontario Library Association’s Silver Birch Fiction Award three times and the Association’s Red Maple Award four times, a Christopher Award and an Africana Book Award. In addition, he co-founded Creation of Hope, a children’s program that provides services to orphans in rural Kenya. Born in Toronto, Ontario, Eric Walters now lives in Guelph, Ontario, with his wife, Anita.

Congrats on your Governor General's Award, Eric. How does it feel to be recognized in this way by your peers?

Winning an award of this magnitude is wonderful.  I’m very grateful to the jury members.

The King of Jam Sandwiches tells the story of 13-year-old Robbie and his relationship with his father. Tell us more about the inspiration for the story.

This is a story I’ve wanted to tell for a while. It’s very personal—so much of it’s drawn from my life. The question became how much of me and my background did I want to share? It’s strange how a story that has at its centre issues of poverty, mental health, and abuse can be about hope and surviving, and ultimately, thriving.

Were there any particular challenges in creating Robbie as a character?

The personal nature of the story made me have to be aware of what was being said, thought, imagined by the character. Creating him wasn’t the problem. Deciding how much to reveal was.

You’ve published over a hundred books now in your career, an outstanding figure! What’s your own litmus test for great storytelling for young people?

The best indicators are the feedback from your readers. Those books that win children’s choice awards are those that grab your readers. I almost always use "beta" readers to look at my stories and their feedback is so important.

The last books I’ve read are Tough Like Mum by Lana Button and Carmen Mok, Pickles Vs. the Zombies by Angela Misri and Fight Like A Girl by Sheena Kamal. I am a passionate believer that we need to promote and support books by Canadians. These are our stories, our culture, our future.

Excerpt from The King of Jam Sandwiches

“Dad, I need to get to sleep. I have an important test tomorrow.”

“Fine. Go back to bed then. You can just step over my body in the morning on your way to take your precious test.”

His words were coming faster now. It wasn’t a good sign.

“Is that test more important than your father?”

“No, it’s not more important than you, Dad. I just need to get to sleep. I have school.”

I nearly blurted out, Not if you’re dead but managed to keep my words in my head and my expression neutral.

“I’m dying, and you’re worried about your little test.”

I almost laughed. But laughing wouldn’t get me anything except more grief.

“Are you going to be this smug and amused at my funeral?”

Obviously I hadn’t hidden my thoughts or expression as well as I’d thought. My father was always good at reading people—well, everybody but himself. I had to go in another direction.

“Do you want me to call an ambulance?” I asked. I said that partly to try to calm him down and partly because I was really starting to get worried. No matter how many times he’d said this before, maybe this time it was true. Why not? People did die. I’d seen it.

“I’d rather die here in my own house. Here, where everybody else…”

He let the sentence hang. There was no need to say anything more. It wasn’t like I’d forgotten who had lived here before and was no longer alive.

My father sat down at the kitchen table. I hadn’t expected that. I’d thought he’d run out of the house or at least keep pacing the room.

I still didn’t want to sit down, but there was no point in arguing. No point in trying to reason. No point in anything. I sat down in my regular spot at the far end of the table, facing him at the other. Ghosts occupied the three other seats.