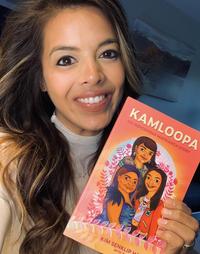 We continue our Governor General’s Literature Awards coverage in conversation with Kim Senklip Harvey, whose work Kamloopa: An Indigenous Matriarch Story (Talonbooks) won in the category of drama.

According to the Peer Assessment Committee, “The brilliance, the irreverence, the fire of Kamloopa sweeps us into the world of three Indigenous women on a mind-bending quest. The audience is seduced by the love, humour and depth of these matriarchs as they embrace and celebrate who they are in the world and with each other. A play that will encourage you to re-evaluate your relationship with Canada.”

Kim Senklip Harvey is a proud Syilx and Tsilhqot’in and an Indigenous theorist, a cultural evolutionist and an award-winning writer and director whose work focuses on igniting Indigenous power by creating comedic and joy-centred narratives that nourish her people’s spirits. She is currently working on the development of two television series: her Salish love story, On the Plateau, and the adaptation of her play, Kamloopa. She is also completing her first prose and poetry book, Interiors: A Collection of NDN Dirtbag Love Stories, and is in pre-production to film a musical feature of her next artistic ceremony, Break Horizons: A Rocking Indigenous Justice Ceremony. She holds a master’s degree in creative writing from the University of Victoria and will be starting a PhD in law in the fall of 2021. All her work is created out of respect for her Ancestors and for the future generations—to whom so much is owed. Kim Senklip Harvey lives on the unceded territories of the Sḵwx̱wú7mesh (Squamish), Stó:lō, Səl̓ílwətaʔ/Selilwitulh (Tsleil-Waututh), xʷməθkʷəy̓əm (Musqueam) and Kwantlen peoples’ Nations.

Congrats on your Governor General’s Award! How does it feel to be recognized by your peers in this way?

Being bestowed the GG is a big honour and a celebration of the many Indigenous and racialized writers that have come before me who have and continue to work incredibly hard to hold space for the next generation. I think what’s most exciting about the award is the fact that the jury has chosen to select an Indigenous comedy, a story that raucously centres Indigenous joy, love, and tenacity. It communicates to Indigenous peoples out there that we don’t have to write trauma-structured narratives that sell our pain—we can and must balance out the stories of the lives of Indigenous peoples with much laughter and even more exultation.

Your play follows two urban Indigenous sisters and a lawless Trickster who face our world head-on as they come to terms with what it means to honour who they are and where they come from. What were some of your inspirations for the work?

Taika Waititi is my storytelling hero! He truly is a master at creating characters and stories that audaciously undermine the tropes of how Indigenous peoples are represented in media and lovingly and hilariously gifts us experiences that nourish our spirits through comedy. I also have been deeply influenced by Marie Clements. Marie’s ability to world build with such innovation and courage really blasts open what I thought was possible in creating. I also respect her as an artistic leader who writes and directs and thus creates, which I think is really important to remember here, directing Kamloopa was a part of the creation process and too often Indigenous women’s directorial capacities are not acknowledged as pivotal to our creation processes.

Tell us more about what was involved in getting the work to the stage.

Ha! Blood, sweats, and tears (of joy and exhaustion.) I was saying to a friend yesterday that people ask “how did you write Kamloopa?” The simple answer is I sat in a Boston Pizza and typed it out. But the reality is it took much healing to be able to write a courage story like Kamloopa. As an inter-generational survivor, I had a lot of healing to do. So I spent significant time finding where my spirit was bleeding out, addressing the wounds and healed the inflammation and I continuously honour any flare ups.

I created a healing practice that calmed my spirit and gave myself deep self-love, and after this honouring I finally had the capacity to write a joke and thus Kamloopa was born and my sovereign storytelling journey began. Healing and honouring is the foundation for my storytelling. I don’t write if I’m off balance, I hold the moment, deeply feel and engage in ceremony to land and nourish my spirit.

Writing is ceremony. Stories are medicine.

Are there particular theatre artists, creators, or others who inspire you in your practice?

I root my methodologies in my Interior Salish Plateau Nations, I look to knowledge keepers, the Ancestors and Mother Earth to guide and ignite my creation practices.

Storytelling is my vocation and I work in relations with the cosmos to support my Nations being stewarded into a more peaceful environment than the one we’ve inherited.

When I look around it’s artists like Yolanaa Bonnell and producers like Sascha Cole and leaders like Heather Redfern and mentors like Kevin Kerr who work hard, generously, and with reciprocity and that ignites the whole artistic ecology and I deeply respect them all for their fulsome processes and practices.

Also my Ma is probably the person who makes me laugh the most. That Matriarch has epic comedic timing!

What authors are you reading these days?

I’m obsessed with Dr. Chanda Prescod-Weinstein’s The Disordered Cosmos at the moment, her ability to weave quantum mechanics, Black diaspora, power and honour the inter-relationalities of Black and Indigenous science and relations is truly remarkable.

I’m also reading Sapiens: A Brief History of Humankind by Yuval Noah as research for my next artistic ceremony, Break Horizons. It’s really humbling for me as a member of the sapiens species, deepening my understanding that we have a lot of work to do with regards to interspecies relations and climate if we want to be around for the next while.

I’ve also been saving Americanah by Chimamanda Ngozi Aditchie. I’ve read the first bit and just fell for it. I like to save books like this for when I need to escape and hop worlds and I can’t wait to traverse into this one!