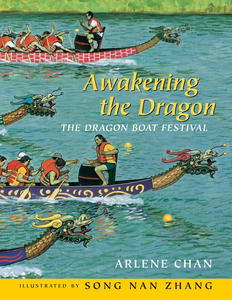 These are books highlighting Asian heritage for the month of May.

Awakening the Dragon: The Dragon Boat Festival, by Arlene Chan, illustrated by Song Nan Zhang, is nonfiction in picture book form. It describes the history and rituals surrounding the race which happens on the fifth day of the fifth month of the lunar calendar in order to protect against misfortune. It also explains race preparation, rules, team makeup—the pacers in the front, the engine in the middle and the rockets in the rear. It captures the process: “Paddles Up! Race Ready!”—boaters' hearts racing, knowing the first powerful strokes count. (Grades 1 to 6) 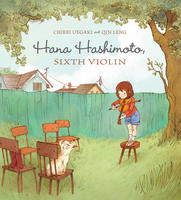 In Hana Hashimoto, Sixth Violin, by Chieri Uegaki, illustrated by Qin Leng, Hana visits her Ojiichan’s (grandfather) home in Japan, complete with shoji screens and tatami mats. Having played in the Kyoto orchestra, he performs for Hana and her brothers on the porch, making his violin sound like crickets or rain on paper umbrellas. Back home, Hana’s brothers make fun of her for wanting to play violin in a talent show. Before performing she waits with “walloping heart” and hears the “oceanic roar” just as she goes on stage to share sounds she makes on her own violin, inspired by Ojiichan, including crows cawing and the neighbour’s cat. (Kindergarten to Grade 3) 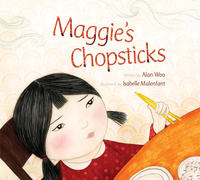 In Maggie’s Chopsticks, by Alan Woo, illustrated by Isabelle Malenfant, Maggie can’t seem to learn to use chopsticks. Advice is offered from three generations of family and she tries many things, including asking the kitchen god whose picture hangs on the wall, and the ancient ancestors on the altar of burning incense and offered fruit. Then she discovers a technique of her own. (Kindergarten to Grade 3) 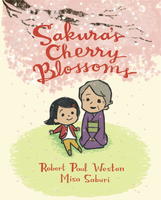 Sakura’s Cherry Blossoms, by Robert Paul Weston, illustrated by Misa Saburi, is about a girl who misses her Obaachan in Japan so much it prevents her from settling into her new Canadian home. This one is written in tanka (a haiku with 2 extra lines) and has some beautiful metaphors and similes. English words “…nipped and snapped on her tongue like the tang of pickled plums.” Her new friend alludes to holding on to memories, telling Sakura to look through his telescope. “There’s a chance one of those stars has gone dark but we still see it because its last rays of light have not yet reached us on earth.” He also says: “When you look up all the time, there are many things you miss.” Like the cherry blossoms that also bloom in Canada. (Kindergarten to Grade 3) 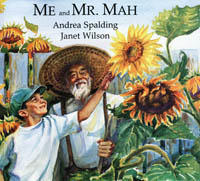 Me and Mr. Mah, by Andrea Spalding, illustrated by Janet Wilson, set in the prairies, is an exchange between two cultures, two ages. A boy whose parents are newly divorced befriends an elderly widowed neighbour. Their short friendship leaves a lasting impression. Together they visit the Chinese Cemetery and Chinatown, and Mr. Man shares dragon-decorated cups, stories of farming back home and his special black-lacquered pencil box of Asian treasures that smell like China. After Mr. Mah moves, the boy finds Mr. Mah’s box in a secondhand shop, which leads him back to Mr. Mah. (Kindergarten to Grade 3) 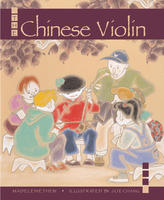 The Chinese Violin, by Madeleine Thien, illustrated by Joe Chang, portrays Lin Lin moving to Canada with her father, missing in particular, the song of the Chinese violin. In Vancouver, her father works as a dishwasher and plays violin in the park for money. One day he gets robbed, his instrument is crushed. Lin Lin feels the pressure to study harder at school. Her father says Vancouver will feel like home soon. He gifts her a violin, making her new life bearable. There’s also an NFB video of the story, created by Joe Chang. (Kindergarten to Grade 3) 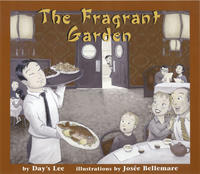 The Fragrant Garden, by Day’s Lee, illustrations by Josee Bellemare, is a wonderful peek inside the running of a Chinese restaurant. Nine-year-old Jade wants to be helpful but her attempts only confirm what her father’s perspective that she’s too young. The tray is too heavy, answering the phone is too chaotic and confusing, and the stoves are too hot for her to cook. So she plants herself in the kitchen to watch the cooks spring into action. Fantastic descriptions abound, with some personifications—“…the egg rolls ignored the frantic activity and relaxed in a hot oil bath in the fryer,” or “The tall cook’s spatula chased the chop suey back and forth across the wok.” (Kindergarten to Grade 3)

In The Hidden Treasure, by Ruowen Wang, illustrated by Wei Xu, Grandpa tells a story to his grandchildren about a dying man whose three sons have abandoned him. When he mentions a buried treasure, the sons return with their manipulative wives to learn where the treasure is. Amongst all the fighting, he offers up one last clue before he dies. At this point in the story, Grandpa pauses to tell his grandchildren he too has a hidden treasure—love! (Kindergarten to Grade 6) 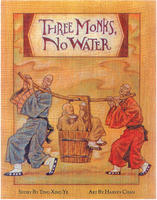 Three Monks, No Water, by Ting-xing Ye, with pictures by Harvey Chan, illustrates the old saying: “One monk has two buckets. Two monks have one. Three monks have none.” A lone monk has to walk down the mountain every day to get water. A pole across his back balances two buckets, one at each end. Another monk arrives, which should make the first monk’s life easier, but one bucket in the centre of the pole, carried by two monks makes for a lot of spilling and less water for the withering vegetable garden. A third monk joins them. The first two think it is his duty to serve them, and alas, that is what the third monk thinks as well. When a fire starts, it wakes them all up to the realization that no water is not an option. (Kindergarten to Grade 6)

In ancient times, the Chinese saw the dragon as both a protector and a threat, able to bring on rain or cause droughts. To honor this powerful creature, people created long narrow boats that they raced in an annual rainmaking festival.

From the wearing of fragrant pouches, to the consumption of rice dumplings, to thrilling boat races, the dragon boa …

In this beautifully written picture book, Hana Hashimoto has signed up to play her violin at her school's talent show. The trouble is, she's only a beginner, and she's had only three lessons. Her brothers insist she isn't good enough. “It's a talent show, Hana,” they tell her. “You'll be a disaster!” Hana remembers how wonderfully her talen …

In this lovely picture book, a young girl named Maggie gets her own pair of chopsticks. Now everyone insists on telling her how to use them. Her grandmother says, “Do it like me!” while she rapidly works her old wooden sticks with a “click-clack-clicketing.” Her sister instructs, “Be graceful like this!” as she crosses her pair “back … A warm, gorgeous exploration of a little girl's experience immigrating to a new country and missing her home and her grandmother, who still lives far away.

Sakura's dad gets a new job in America, so she and her parents make the move from their home in Japan. When she arrives in the States, most of all she misses her grandmother and the cherry blosso … 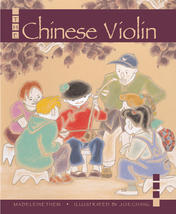 When Lin Lin and her father immigrate to Canada from China, they bring with them one of their most treasured possessions - a traditional Chinese violin. From the beauty of their new country to the uneasiness of not fitting in, this violin sees them through all their experiences, good and bad. One day, however, a terrible misfortune occurs when the …

Jade is a curious nine-year-old who likes to help out at her family’s Chinese restaurant, The Fragrant Garden, after school. Though she is often allowed to help set tables or clean up, she longs to be part of the more exciting tasks such as helping in the kitchen or using the cash register. Her father thinks she is too young for these responsibil …