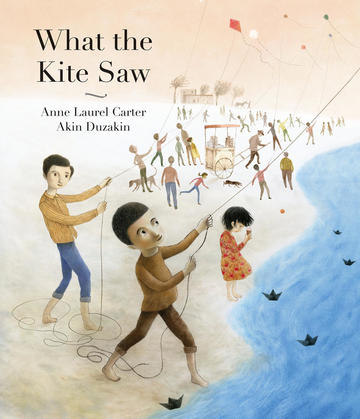 My new picture book, What The Kite Saw, illustrated by Akin Duzakin, shares what a young boy feels and does after soldiers seize control of his town and take his father and brother away. War has a brutal impact on children whenever adults (nations) resolve a conflict through military force. I gave this story a universal setting because, sadly, it could happen anywhere.

Children have their own unique ways of facing a crisis. Yes, they need protecting, but they are also resilient. They have inner resources, spunk and imagination. The young protagonists in the stories I’ve chosen face their crisis in ways I find inspiring with an idea they’ve imagined themselves. No adult guides the child. Regardless of the situation, these stories reflect a respect for the dignity of children.

Eight-year-old Margaret Pokiak is determined to learn to read and ignores her father’s warnings that residential schools are terrible places. After Margaret leaves the safety of her village in the high Arctic she regrets her decision. The residential school is a harsh place and she is far from home. Raven, a black-cloaked nun in authority, takes an immediate dislike to Margaret and humiliates Margaret by giving grey stockings to the other girls as part of their required uniform and an odd pair of ugly red ones to Margaret. In an instant, Margaret becomes the laughingstock of the entire school. In the face of racism and cruelty, spirited Margaret finds the perfect way to destroy the stockings. Based on a true story, this girl is inspiring. 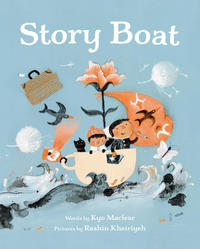 When a little girl and her younger brother must flee the home they've always known with their family, they must make a new home for themselves wherever they are. And sometimes the smallest things—a cup, a blanket, a lamp, a flower, a story—can become a port of hope in a storm. As the refugees travel to an uncertain future, they are buoyed up by their hopes, dreams and the stories they tell. A lyrical picture book about the migrant experience through a child's eyes, dedicated to Syrian refugee children.

Small in the City, written and illustrated by Sydney Smith

The city, seen through a child’s eyes, can be a loud, overwhelming, and scary world. Sydney Smith tells the story of a boy who knows exactly what it’s like to be small in the city yet trusts that his lost cat will be all right and find their way safely back home. Beautiful watercolour illustrations alternate between full spreads and small panels, evoking the cacophony of urban sights and sounds, as well as the quiet moments that make all of us feel less small in the city. 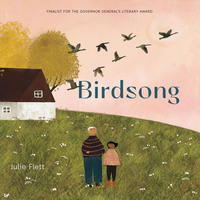 When Katherena and her mother move to a small town, Katherena feels lonely and out of place. When she meets Agnes, an elderly woman artist who lives next door, her world starts to change.

Katherena and Agnes share the same passions for arts and crafts, birds, and nature. As the seasons change, so does the health of her new friend. Toward the end Katherina brings the perfect gift: all her drawings of nature and birds mounted on the walls around bedridden Agnes. 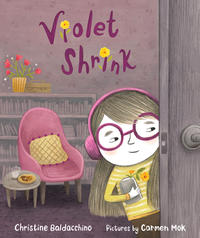 Violet Shrink doesn’t like parties or gatherings. Lots of people and lots of noise make Violet’s tummy ache and her hands sweat. She’d rather be alone, watch birds in her backyard, read comics or listen to music. The problem is that the whole Shrink family loves parties with loud music, games and dancing. When Violet learns she must attend the Shrink family reunion, she musters up the courage to have a talk with her dad.

The story demonstrates the role imagination plays for children dealing with anxiety, and the power of a child expressing their feelings to a parent who is there to listen. 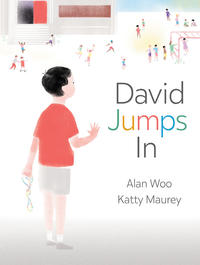 David Jumps In, by Alan Woo, illustrated by Katty Maurey

First day in a new multicultural school with no friends can be a crisis for a child. In this lyrical tale David stands alone, watching the other children at recess. Bundled deep inside David's pocket is a string of rubber bands, knotted and ready for a game of elastic skip. With roots in ancient China, David's jump-rope game—called elastic skip in the story, but known by many different names—becomes a symbol for connection, linking David and his multicultural schoolmates in the fun of playing a game together. 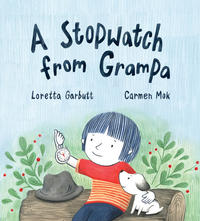 A Stopwatch from Grampa, by Loretta Garbutt, illustrated by Carmen Mok

When a beloved grandparent dies children need time to move through grief (denial, anger, bargaining, depression, acceptance) and cope with loss. In this well-told story the child inherits a treasured, symbolic object, Grampa’s stopwatch, but rejects it because timing things was a shared pastime with Grampa, and Grampa’s gone. “There are no more Grampa minutes, Grampa seconds,” the child says. “Time just stops.” As seasons come and go, the stopwatch becomes a cherished symbol of remembrance, and the child uses it to carry on the pastime. 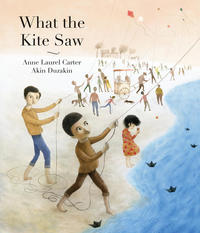 Learn more about What The Kite Saw:

In this memorable story, a young boy finds solace flying his kite from the rooftop after soldiers take his father and brother away.

Without his father and brother, the young boy’s life is turned upside down. He and his family have to stay inside, along with everyone else in town. At suppertime, he can’t stop looking at the two empty places at the table and his sister can’t stop crying. The boy looks out the window and is chilled to see a tank’s spotlight searching the park where he plays with his friends. He hears shouts and gunshots and catches sight of someone running in the street—if only they could fly away, he thinks.

Each day the curfew is lifted briefly, and the boy goes to the park to see his friends. One day, inspired by the wind in the trees, he has an idea. Back at home he makes a kite, and that night he flies it from his rooftop, imagining what it can see.

In this moving story from Anne Laurel Carter, with haunting illustrations by Akin Duzakin, a young boy finds strength through his creativity and imagination.

What the Kite Saw

In this memorable story, a young boy finds solace flying his kite from the rooftop after soldiers take his father and brother away.

Without his father and brother, the young boy’s life is turned upside down. He and his family have to stay inside, along with everyone else in town. At suppertime, he can’t stop looking at the two empty places at th …

The beloved story of an Inuvialuit girl standing up to the bullies of residential school, updated for a new generation of readers.

Margaret Olemaun Pokiak-Fenton’s powerful story of residential school in the far North has been reissued to commemorate the memoir’s 10th anniversary with updates to the text, reflections on the book’s impact, and …

When you have to leave behind almost everything you know, where can you call home? Sometimes home is simply where we are: here. An imaginative, lyrical, unforgettable picture book about the migrant experience through a child's eyes.

When a little girl and her younger brother are forced along with their family to flee the home they've always known, t …

Small in the City

The first picture book that the award-winning Sydney Smith has both written and illustrated is a story about feeling small in the city — and finding your way home.

On a snowy day in a big city, a little boy hops off a streetcar and walks through downtown, between office buildings, through parks and down busy streets. Along the way, he provides hel …

A touching and thoughtful gift for the art lovers in your life.

FINALIST FOR THE GOVERNOR GENERAL’S AWARD

In this powerful story from Christine Baldacchino, author of Morris Micklewhite and the Tangerine Dress, a young girl navigates social anxiety at family gatherings and works with her father to find a solution.

Violet Shrink doesn’t like parties. Or bashes, or gatherings. Lots of people and lots of noise make Violet’s tummy ache and her hands swe …

This lyrical tale, written in simple free verse, tells how a game with roots in ancient China --- called elastic skip in this story --- helps a boy find his footing on his first day at a new school.

It is David's first day at his brand-new school. He doesn't know anyone. At recess, he stands alone and watches the other children enjoying their activi …

Stopwatch from Grampa, A

A child inherits a treasured stopwatch that belonged to a beloved grandparent in this touching story of loss that explores the stages of grief with sensitivity and wisdom.

“When summer started, I got Grampa's stopwatch,” a small child says. “I don't want his stopwatch. I want him.” Grampa used to time everything. A race to the end of the str …