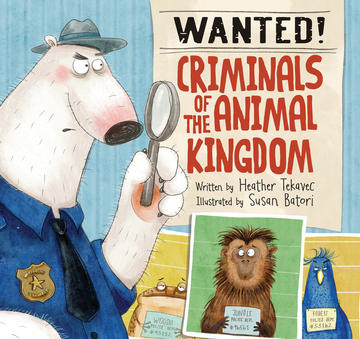 Wanted! Criminals of the Animal Kingdom, written by Heather Tekavec, illustrated by Susan Batori, is a clever way of presenting information. Each “wanted” animal is showcased alongside a rap sheet of aliases, distinguishing features, life span and sightings (location), and most fun—witnesses and previous arrests. There’s lazy Big Bad Mama (aka the common cuckoo), who sneaks her egg into a neighbouring nest, forcing another mother to do all the hatching. When Big Bad Mama’s baby is born, she pushes out the other eggs and moves into the newly vacated dwelling. The witnesses? Hundreds of angry mother birds. Older students could adapt the rap sheet format in order to record their own research findings. Kindergarten-Grade 3. 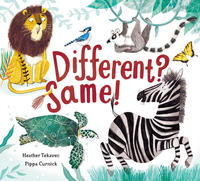 Different? Same!, also by Heather Tekavec, illustrated by Pippa Curnick, contains four very different creatures per page, alongside patterned text calling out similarities; for example, a chameleon, a snake, a turtle and a fish appear next to text: “I perch. I slither. I plod. I swim…But look closer now…we all have scales.” The grand finale is a menagerie of living things with the challenge: “How many animals can you find that have spots? Make good pets? Have six or more legs? You would NOT like to touch.” There’s a two page spread on why animals have certain characteristics, such as stripes, whiskers or tusks. Great for Kindergarten-Grade 1. 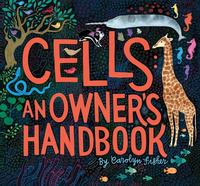 Cells: An Owners’ Handbook, by Carolyn Fisher, simplifies a complicated concept with the help of narrator Ellie, a skin cell living on the derriere of a Boston terrier. “Congratulations! You are the owner of 37 trillion high performance cells (give or take a few trillion),” Ellie says. Bold illustrations with eye-catching text provide a multitude of facts about cells, including what they are, their different types, shapes, sizes and jobs, as well as what makes up a cell. There are several illustrations that put cells in perspective—sometimes magnified thousands of times—and lots of juicy science words like “multicellular,” “nucleus,” and “mitosis." Humour abounds—from cells taking “a cellfie!” to the way text is laid out on the page. For Grades 1-6.

I know a Grade 6 teacher who, each year, has his students grow mushrooms in little jars all along the chalkboard ledge. A great accompaniment to such an experiment might be The Mushroom Fan Club, by Elise Gravel. Learn about different types of fungi, along with funny things that happened to the author while searching for mushrooms and how to make a spore print. Did you know  there are millions of species of mushrooms? And mushroom scientists are called “mycologists”?

Elise Gravel has tackled some lesser liked critters in her Disgusting Creatures Series. Each book is perfect for as young as kindergarten but Grade 6 students would love them, too. The series include the following titles: The Fly, Head Lice, The Spider, The Toad, The Slug, The Cockroach, The Rat and The Worm. Cartoonish illustrations are a palatable way of learning characteristics, species, habitat, body parts, movement, food and reproduction. Also mentioned are each one’s role in the environment. Lice have no purpose, for example, unlike the very useful toad who eats pests that attack crops. And there’s some great vocabulary like retractable, muscidae (the fly family), transparent (lice’s tummy), incisors, ootheca (the purse which contains cockroach eggs). Humour is at the forefront with a louse (a single lice) seen swinging Tarzan-style from hair shaft to hair, and a fly, who lives between 15 and 30 days, exclaiming, “Mom, I’m not a baby anymore! I’m 6 days old!” Students could illustrate their own researched facts in a similar fashion. 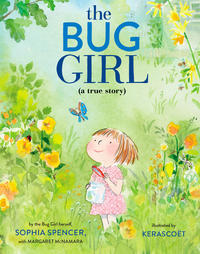 The Bug Girl (A True Story), by Sophia Spencer & Margaret McNamara, illustrated by Kerascoet, introduces the reader to bug-lover, Sophia Spencer. Sophia set up an outdoor bug club, which was cool in kindergarten but not in Grade 1. She was bullied for her interest so she packed up her bug gear and pretended not to care about little critters. But kids continued to call her “bug girl.” When her mom wrote a letter to the entomological society inquiring about a pen pal for Sophia, it went viral; scientists from around the world responded and set her back on track to becoming a future entomologist. At age 11, she wrote this book with the help of McNamara and the beautiful water colour illustrations of Kerascoet to tell the story of sticking to your scientific dreams. 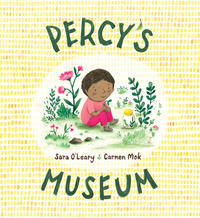 Percy’s Museum, by Sara O’Leary, illustrated by Carmen Mok, is a fictional tale, great for Kindergarten-Grade 1. Sweet, appealing illustrations show Percy, lonely and bored, after moving from the city to the country. At the end of his very big yard he discovers a “Percy-sized house,” and even better—“bees kissing flowers…birds putting on air shows.” Trees, bugs, and the pond become his new playground. While drawing pictures and collecting objects, Percy discovers that “sometimes WILD means big and scary and sometimes it means small and sweet (like a wild strawberry)” and “the dark can seem empty but really is very full.” His Percy-sized house becomes a showpiece for his drawings and collectibles, as well as a new-friend magnet.

The next two books, both by Dana Hopkins and illustrated by Aaron Edzerza, are part of the Nunavummi Reading Series, a levelled book series teaching kids about Arctic people, traditions and environment. 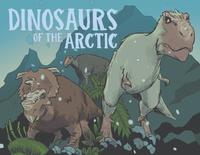 When we think about dinosaurs, we don’t really think about the far north but Dinosaurs of the Arctic tells us bones have been discovered in Nunavit. This one would be good for Kindergarten to Grade 1, or students in Grade 2-3 doing their own research. With 3-6 sentences per page, and illustrations providing context, it reveals the Arctic wasn’t as cold 65 million years ago; it was about the temperature of a fridge. And dinosaurs had to survive all that snow, lack of sunlight and food scarcity. Relative size is shown on a grid, with the ugrunaaluk as long as 3 polar bears. Did you know the tiktaalik, a fish-like animal walked on land with its fins? And giant camel bones have been found on Ellesmere Island? 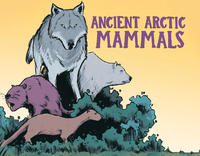 Ancient Arctic Mammals has more text with 2-3 paragraphs per page, interspersed with bolded vocabulary and definitions. It includes creatures who have survived to this day: caribou, wolves and the siksiit (Arctic ground squirrels that have been around for 10 million years.) This book introduces the reader to a beaver the size of a polar bear and puijila, which were like seals with legs, living on both land and water over 20 million years ago. Both texts ignite the imagination—how did dinosaurs adapt to their severe conditions?

Wanted! Criminals of the Animal Kingdom

Think animals are all well-behaved? Think again. These thirteen play dirty. But they're about to get caught!

A fish who deceives her prey with a light dangling in front of her mouth? A bird who leaves her eggs in another bird's nest to be raised? A monkey who shouts “Danger” to scare away the others from the fruit? Meet some of the animal kingdo …

This clever picture book introduces the concept of animal characteristics by highlighting how there can be both differences and similarities within a group. For example, the zebra gallops, the bumblebee flies, the lemur leaps and the tiger prowls --- “But look closer now ... We all have STRIPES!” And so it goes. Again and again, readers will be …

Join Ellie, a skin cell who lives on the derrière of a Boston Terrier, as she tells readers all about the amazing cells that make up every living thing on Earth.

Did you know that every human is the proud owner of 37 trillion cells? (Give or take a few trillion.) They’re the itty-bitty building blocks that stack together to make you, you! Join a …

Appeared on Best of 2018 lists from Quill & Quire and the Globe and Mail !

Although the fungi are anthropomorphized with cartoon eyes and goofy grins, the research behind the book is real." - The Globe & Mail 100 Best Books of 2018

The first in a series of humorous books about disgusting creatures, The Fly is a look at the common housefly. It covers such topics as the hair on the fly's body (requires a lot of shaving), its ability to walk on the ceiling (it's pretty cool, but it's hard to play soccer up there), and its really disgusting food tastes (garbage juice soup followe …

Part of a series of hilarious non-fiction books about disgusting creatures, this book examines head lice. It covers such topics as head lice habitats (human heads only, dogs are gross), anatomy (his body is slightly see through, so he can always see what he ate for lunch), and parenting practice (the female louse sticks eggs to human hair and uses …

Part of a series of hilarious non-fiction about disgusting creatures, this book looks at the spider. It covers such topics as the spider's habitats (pretty much everywhere but outer space), the silk it spins (it can trap prey and makes a nifty bowtie), and its parenting practice (female spiders carry around their eggs in a silk purse). Although sil …

She's good for the environment... and she's disgusting!

Disgusting? Yes, but fun, too!

The Toad is the next installment of the Disgusting Critter series. Hilarious illustrated non-fiction about toads perfect for beginning readers. Although silly and off-the-wa …

One in a series of humorous books about disgusting creatures, The Slug is a look at the land slug. It covers such topics as the slug's two pairs of tentacles, one pair for seeing, one pair for smelling (it can see you're a kid and smell like broccoli), its breathing hole (on the side of its head!), and its pretty gross mucous covering (in order to …

Hilarious illustrated non-fiction about cockroaches perfect for beginning readers. You'll bug out over this perfect pairing of humorous text and funny illustrations about this insect that's been around for over 335 million years!

Diet: Everything! (Especially if it's greasy and sweet . …

One in a series of humorous books about disgusting creatures, The Rat is a look at the black rat. It covers such topics as the rat's long, agile tail (it's good for balancing and picking noses), long teeth (they can chew through anything, including books) and disgusting taste in food (delicious electrical wires in tomato sauce, anyone?). Although s …

The second in a series of humorous books about disgusting creatures, The Worm is a look at the earthworm. It covers such topics as the worm's habitats (sometimes they live inside other animals), its anatomy (its muscle tube is slimy and gross), and its illustrious history (worms have been on earth for 120 million years). Although silly and off-the- …

7-year-old Sophia Spencer was bullied for loving bugs until hundreds of women scientists rallied around her. Now Sophie tells her inspiring story in this picture book that celebrates women in science, bugs of all kinds and the importance of staying true to yourself. A sweet story about embracing change, the excitement of discovery and the wonder of nature and new friends.

A young boy moves from the city to a new home in the country. He misses his friends, but at least it’s summertime — flowers are blooming, baby birds are hatching, and caterpillars are transforming into butterflies. Enraptured by the natura …

Dinosaurs of the Arctic (English)

Learn about dinosaurs that lived in the North!

This book gives interesting facts about the different types of dinosaurs and other ancient animals that lived in the Arctic long ago.

Learn about some of the mammals that roamed the Arctic long ago! From seals that walked on land to giant bears, this book features different mammals that once lived in the Arctic.