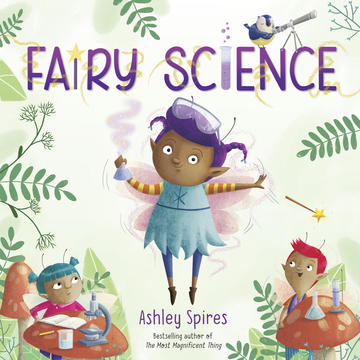 In Fairy Science, by Ashley Spires, Esther is the only fairy in Pixieville who believes in science. According to Esther, magical rainbows are actually the dispersion of light; water droplets on plants, viewed as a bad omen, are simply condensation; spirit faces in the rocks are a result of erosion. She teaches her fellow fairies the scientific method, the periodic table and demonstrates gravity. But it takes a wilting tree and Esther’s data-based life-saving research to convert a few fairies to her way of thinking. This tale includes a bean experiment at the back. (Grades 1-3) 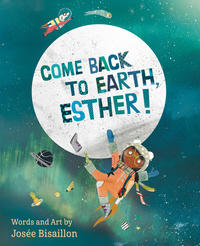 Come Back to Earth, Esther! written by Josée Bisaillon depicts Esther as a normal girl with an astronomy obsession. She recreates solar systems at mealtime (e.g. a pancake and a strip of bacon looks like Saturn; half-bitten cookies are phases of the moon), reads upside down like astronauts in space, ‘orbits earth’ while swimming in the ocean, and invents dreamy space-scapes at night. The climax…a backyard launch of her spacecraft made out of recyclables. (Kindergarten to Grade 2) 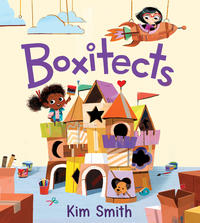 The Boxitects, by Kim Smith, is a book that will inspire “boxitecture.” At Maker School there are “blanketeers, spaghetti-tects, tin-foilers, egg-cartoneers, and bake-ologists” but Simone is the only boxitect. Then Meg shows up, making box structures a bit sturdier and prettier than Simone’s. A Maker Match brings out the girls’ competitive natures, forcing them to work as a team and meld two creations into one. A true tale of teamwork in the STEM world. (Kindergarten to Grade 2) 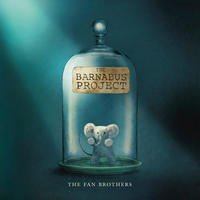 The Barnabus Project, by the Fan Brothers, is all about failed projects. Half-mouse, half-elephant, Barnabus is trapped in a secret lab beneath the Perfect Pets store along with all the other imperfect pets. Green rubber-suited engineers stamp "FAIL" on his bell jar; he’s not fluffy or big-eyed enough. His elephant sound cracks the glass (how that happens is a STEM question in itself) and helps the others escape. The journey leads him to his perfect self—aka Barnaby—and all the perfect versions of the other characters. The “imperfects” find freedom and a place in the world. On the surface, this might not seem like a STEM book but it’s an allegory about valuing our ‘mistakes’ as engineers. It’s also about teamwork. The illustrations in this 72-page picture book, with minimal text, are compelling. (Kindergarten to Grade 3)

These next three are nonfiction titles. 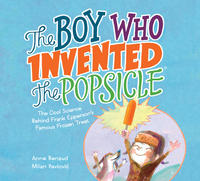 The Boy Who Invented the Popsicle: The Cool Science Behind Frank Epperson’s Famous Frozen Treat, by Anne Renaud, illustrated by Milan Pavlovic, is the journey of an invention. At age 10, Frank began inventing on his back porch. A weird temperature drop in California coincided with his soda water invention, which he left outside to create a frozen treat. He kept this finding to himself until he was grown and could build a container that froze the sugar evenly. He named the result, the Epsicle, which was later renamed when his 6 children kept demanding the treat from “Pops!” This book is interspersed with experiments, so you can follow along with Frank’s discoveries; for example, learn to make lemon flavoured soda water; try an experiment which shows how salt lowers the freezing point of water; learn to make a frozen treat in 5 minutes! At the back of the book there’s an authors’ note about Frank’s life. (Kindergarten to Grade 3) 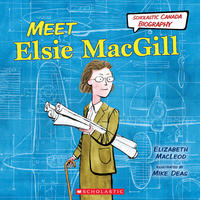 Do kids know about Elsie MacGill? The world-famous Canadian aviation engineer? Now they do, with this picture book: Meet Elsie MacGill: a Scholastic Canada Biography, by Elizabeth MacLeod. Mike Deas’ cartoon-like illustrations depict the life of the girl who took apart lamps and clocks at a young age. Her parents (her mother was the first woman in Canada to become a judge) believed that girls should be educated in a time when engineering schools were full of men. Elsie became the first woman to graduate with a degree in electrical engineering, and overcame polio to earn a graduate degree in aeronautical engineering. She tested and designed planes, developing a method of manufacturing airplane parts during World War II to speed up their repair. She added skis so planes could land in the Soviet Union winter. Later Elsie became an advisor to the UN and helped pass laws which paved the way for women in science. (Grades 1-6) 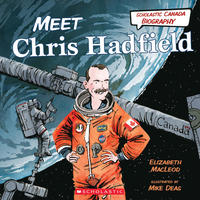 Also by Elizabeth MacLeod, and illustrated by Mike Deas, Meet Chris Hadfield, is the story of the well-known astronaut. Chris began fixing machinery on his childhood farm, then attended Military college, studying mechanical engineering. He became a test pilot and fulfilled a longstanding wish to work at NASA, chosen over 500 applicants. This chronicles Chris training underwater, building the ISS, working with the Canadarm and being the first Canadian to walk in space (where helmet cleaner got in his eyes but he remained calm, staying out in space for 7 hours to complete his tasks.) The book details how, in 2010, Chris commandeered a 146-day mission in the ISS, in which he broadcast experiments, answered questions, played guitar, fixed a very dangerous leak, and rocketed to fame. These are the two STEM-related titles in the Scholastic Canada Biography series by Elizabeth Macleod & Mike Deas. Each include a timeline at the back and there’s a bit of a teacher’s guide on the website. (Grades 1-6)

The award-winning author of The Most Magnificent Thing introduces the value of science and inquiry to young readers with humor and heart. For fans of Ada Twist, Scientist and Hidden Figures.

Esther the fairy doesn't believe in magic. But fairies are all about magic, despite Esther's best efforts to reveal the science of their world. No matter how sh …

Come Back to Earth, Esther!

What Esther loves the most, what she dreams about every night, is space.

From the award-winning illustrator of Leap!, Bedtime 1, 2, 3, and The Snow Knows, Come Back to Earth, Esther! is a full-hearted celebration of a fun-loving, space-obsessed girl who wishes, more than anything, to build her own spaceship, liftoff into the sky, and explore the ga … 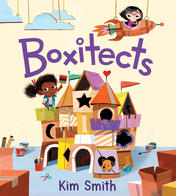 Nothing’s better than building with boxes!

Meg is a brilliant and creative boxitect. She loves building extraordinary things out of ordinary cardboard boxes and impressing her classmates with what she creates. But then a new kid comes to Maker School: Simone. Simone is …

In a world built for Perfect Pets, Barnabus is a Failed Project, half mouse, half elephant, kept out of sight until his dreams of freedom lead him and his misfit friends on a perilous adventure. A stunning picture book from international bestsellers The Fan Brothers, joined by their brother Devin Fan.

Boy Who Invented the Popsicle, The

Frank William Epperson is a curious boy who wants to be an inventor when he grows up. Since inventing begins with experimenting, Frank spends a lot of time in his “laboratory” (i.e. his back porch) trying out his ideas, such as building a double-handled handcar that whizzes past the single-handled cars in his neighborhood. What Frank loves most …

In this amazing addition to the Scholastic Canada Biography series, young Canadians will learn about the trailblazing Elsie MacGill, whose work on the Canadian-made Hawker Hurricane fighter helped the Allied forces to victory in World War II.

Meet Colonel Chris Hadfield, the first Canadian to walk in space — and make a music video while in orbit!

When Chris Hadfield was a boy, growing up on a farm in Milton, Ontario, Canada didn't have a space program. But from the moment he saw a man first walk on the moon, young Chris decided he would somehow get to space. And with everything Chris …