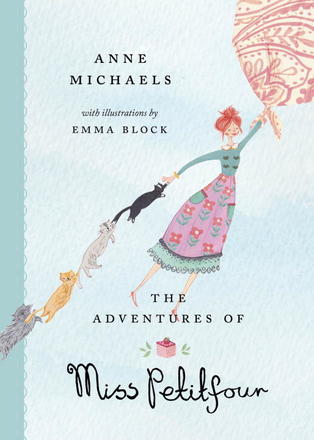 The Adventures of Miss Petitfour, by Anne Michaels, illustrated by Emma Block, is a brilliant collection of five short stories, all featuring the enigmatic Miss Petitfour. Miss Petitfour loves to bake little cakes and she loves to eat. She loves her neighbourhood with its bookstore and bakery. And she loves to fly, travelling by tablecloth, puffed up “like a biscuit in the oven,” with her “sixteen cats dangling in one gigantic puss-tail.” Each story brings adventures, big and small: discovering the empty marmalade pot, with the spoon still in it; getting caught up in a jumble of coat hangers; chasing a runaway rare stamp; celebrating Minky, the cheese-loving cat’s birthday; rescuing a neighbour from a confetti explosion.

The charm of this book, besides its obvious appreciation of food and enticing descriptions, is found in the playfulness of the language, imaginative characters and creative plot twists. Plus, there’s the bonus of the authorial voice instructing the reader on key phrases (some of which are even in a different font colour) that can turn a story on a dime or resolve a plot thread or steer into an interesting digression. For example, Michaels writes: “These three words, THEN ONE DAY, open the story like a tiny key.” Or: “…there are other words that save the day, words like, FORTUNATELY, THANK GOODNESS, and WHATEVER WOULD WE HAVE DONE IF YOU HADN’T REMEMBERED TO BRING THE GLUE.”

Or when the cats pull a ribbon into the form of a cat’s cradle, the author asks the reader if they know the game. “You don’t? Ask someone immediately. We’ll wait here.” (Kindergarten to Grade 6) 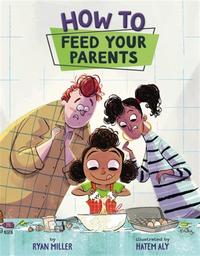 How to Feed Your Parents, by Ryan Miller, delightfully illustrated by Canadian Hatem Aly, features a reversal of roles. Matilda Macaroni is a girl with an adventurous palette whose parents’ limited diet consists of burgers, pizza and cereal that turns milk a different colour. A surprisingly yummy bowl of grandmother’s jambalaya awakens Matilda’s interest in “oven safety and knife safety and all of the other safeties” and a desire to cook. Alliterations abound as Matilda “perfected paella, mastered miso soup and conquered croquettes.” Mom and Dad rebel when Matilda makes ‘green stuff’ (arugula) but Matilda lays down the law: “This is what’s for dinner….if you’re hungry you’ll eat.” (Kindergarten to Grade 3) 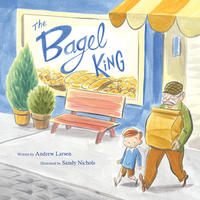 The Bagel King, by Andrew Larsen, illustrated by Sandy Nichols, begins: “Warm. Chewy. Salty. Bagels were the best thing about Sunday.” The elderly Zaida delivers them every Sunday to young Eli’s house. But one Sunday Zaida slips and falls on his “tuches” and has to rest, ending the bagel run. Eli is not the only one disappointed…Zaida’s friends have been getting together for bagels for years. Eli gets an idea when looking at the moon, (which looks like a bagel smothered in cream cheese) to take over the delivery himself, earning him the title of “Bagel King.” A sweet ending to a story that will leave you craving bagels. (Kindergarten to Grade 3) 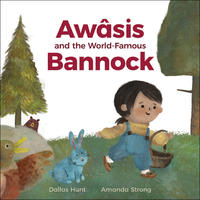 Awasis and the World-Famous Bannock, by Dallas Hunt, illustrated by Amanda Strong, provides a built-in Indigenous cooking lesson. Awasis’ Kohkum asks her to take some of her world-famous bannock to a relative but she accidentally drops it in the forest. Awasis encounters a series of animals who offer (in Cree) the ingredients. When she heads home to apologize, her Kohkum simply laughs and together they remake the bannock. This book, with its recipe and list of translated Cree words, along with their pronunciations, is a great way to introduce Cree food vocabulary to young readers. (Kindergarten to Grade 3) 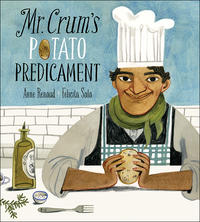 Mr. Crum’s Potato Predicament, by Anne Renaud, illustrated by Felicita Sala, is a fictionalized version of the true story of Afro-Indigenous American inventor of potato chips, George Crum. George’s specialty is potatoes. He opens a restaurant and one day a customer, “finicky, persnickety Filbert Punctilious Horsefeathers” sends back his spuds saying they are too thick, bland and undercooked. George tries several more times to please Filbert, making them extra salty and so thin they splinter beneath a fork, forcing his customer to eat them with his fingers. Plenty of alliteration and adjectives make the foods in this one deliciously descriptive. (Kindergarten to Grade 3)

These next three are great for kindergarten. 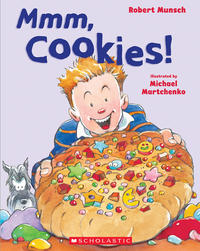 Mmmm Cookies, by Robert Munsch, illustrated by Michael Marchenko, has some great onomatopeia (sound words) relating to food. You know when you were young and you made a cookie out of plasticine and presented it to your parents? And they pretended to take a bite—yum, yum? In this tale, Munsch takes it a bit further; the parents take a real bite, and have to wash their mouths out because of the taste. Mom and Dad seek revenge by asking Christopher’s teacher to retaliate with a clay cookie at school. 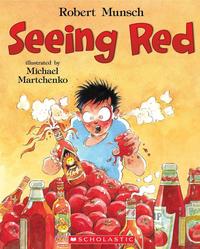 Seeing Red, by Robert Munsch, illustrated by Michael Martchenko, is about two friends who envy each other’s hair colour. Arie says his hair is red because of the foods he eats, so Alex ingests tomatoes, ketchup, and the one that breaks him—hot sauce—but his hair remains black. Upon Arie’s advice, Arie eats foods like licorice, coffee and pepper, but nothing changes. Together they come up with a creative solution. Great for a lesson on colours in food. 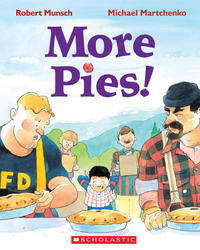 In More Pies! by Robert Munsch, illustrated by Michael Martchenko, Samuel is starving. Even the stacks of pancakes, the salad-bowl full of cereal and the  seven fried chickens his mother makes will not satiate him. He heads to a pie-eating contest in the park and out-eats the lumberjacks, firefighters and constructions workers, who all turn various colours and roll around with stomach aches, leaving Samuel still standing, still hungry.

The Adventures of Miss Petitfour

The magical adventures of an eccentric Mary Poppins-esque heroine and her flying feline charges, sure to charm readers big and small. The first book for children by an internationally acclaimed novelist and poet.

Miss Petitfour enjoys having adventures that are "just the right size - fitting into a single, magical day." She is an expert at baki …

Every Sunday morning, no matter the weather, Eli could count on Zaida to bring bagels from Merv's Bakery. Eli loved the time they spent together enjoying their favorite treats. “Warm. Chewy. Salty,” Eli thought. “Bagels were the best thing about Sunday.” But one Sunday, Zaida didn't come. He had fallen at Merv's and “hurt his tuches,” a …

Awâsis and the World-Famous Bannock

During an unfortunate mishap, young Awâsis loses Kôhkum’s freshly baked world-famous bannock. Not knowing what to do, Awâsis seeks out a variety of other-than-human relatives willing to help. What adventures are in store for Awâsis?

Robert Munsch cooks up some mischief in this scrumptious tale — now with a fresh new look!

When Christopher goes into the basement and sees a pile of play clay in the corner, he decides to cook up some mischief. Wap, wap, wap - he shapes the clay into cookies, and then decorates them with sugar, icing and raisins, all of play clay.

What is the secret behind Arie's red hair?

Alex is dying to know why Arie's hair is so red. So he asks him if there if there is a secret to it all, or better yet, something he can do to turn his own black hair red?

Soon he's following Arie's good advice and consuming daily doses of tomatoes and ketchup. But when he finds himself drinking hot sauce t …

This favourite Munsch title gets a brand-new look

Samuel has woken up hungry and it seems that nothing can satisfy him. Luckily, there's a pie-eating contest in the park, where Samuel eats not one, not two, but six pies! To everyone's surprise, he wins the contest without getting sick. But what will happen when he discovers his mother has made him …