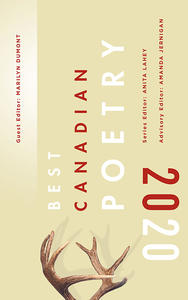 Guest Editor Marilyn Dumont writes about her vision for the anthology in her introduction to the book, which we're pleased to excerpt here today.

Before taking on the task of guest-editing Best Canadian Poetry 2020, I had no idea how poems were identified for such an anthology, despite habitually acquiring collections on an annual basis myself. I avidly purchased anthologies throughout the years, and whether I agreed with the anthol­ogist on their yearly selection of poems or not, I always found anthologies instructive because of their capacity to curate a collection of poems that have spoken to a particular poet’s aes­thetic at a specific time in the literary history of a country. If I consider the number of volumes in my bookshelf with the word “best” in the title, there seems to be no end of the desire to isolate what warrants merit among the genres.

Anthologists are not search engines generating a reposi­tory of merit in collections, but instead are human beings pushed and pulled by a plethora of stimuli, praxis, and concep­tions of craft while making selections that resonate with them, and thereby, an anthology becomes a record of literary history.

Anthologists are not search engines generating a reposi­tory of merit in collections, but instead are human beings pushed and pulled by a plethora of stimuli, praxis, and concep­tions of craft while making selections that resonate with them, and thereby, an anthology becomes a record of literary history.

What is a best poem? A best poem fulfills the promise set out in its first syllable, word, syntax, line break, and sound­scape to its reader/listener. The work required to complete a poem takes risk, skill and practice, and the poems selected for this anthology all exhibit such attributes.

In my reading criteria, I looked for poems that used lan­guage to expose attitudes inherent in the English language itself, the conceptions of civilized/savage; human/nature; sanctioned/forbidden and colloquial/academic. I looked for experimentation in form and approach to content, and gravitated to treatments of topics that were oblique in form. I searched for a poet’s control of language as a composer would create a musical score. Some musical scores are lyric, brief and melodic, such as the late Adele Wiseman’s “Never Put a Poem Off.” Other poetic scores are disruptively cacophonous, such as “Blockade,” by Robert Budde; or sustained and sombre, such as the epic score from Erin Soros in “Weight.” Prosody is a joyous preoccupation when one comes across poems such as “From Cocks to Wings,” by Barry Dempster; “Pink Mints,” by Armand Ruffo; or “Stutters,” by Roger Nash.

The slant treatment of its topic is what draws me to Robyn Sarah’s “Artist’s Statement,” a clever comment on the ubiquitous required professional biography all poets must craft. “12 Rules for Gatekeeping,” by Kyle Flemmer, stood out as a candid list of editorial etiquette seldom shared beyond the pages of a publi­cation. Similarly, I was drawn to the potent illustrative approach taken by Margaret Bollerup in “Dementia and common house­hold objects,” which corrals the impenetrable senility, loss of communication, and attendant profound sadness; while Conor Kerr’s “Directions to the Culture Grounds” foregrounds cul­tural difference in simple but brilliant narrative contrast.

Writers of colour, Indigenous writers, women, LGBQT2S writers, writers with physical challenges, have all been under­represented in the publishing world because, as Daniel Heath Justice has written in his book, Why Indigenous Literatures Matter (Wilfrid Laurier University Press, 2018), “assumptions about what is or is not ‘literary’ are used to privilege some voices and ignore others.” So in my deliberation, I was mindful of what Jamaican poet Kei Miller terms the “understory”: the narrative that disrupts the falsehoods of benevolence and nationhood. Several selections treat and disrupt settler colonialism and notions of Indigenous deficiency in clever and inventive ways, such as Billy-Ray Belcourt’s “Cree Girl Explodes the Necropo­lis of Ottawa,” in which “Nothing / but NDN possibility would flower everywhere outside / the frame”; when Rita Bouvier reminds readers that they are “here on turtle’s back” in “Deeper Than Bone”; how Selina Boan unfolds a world of Cree epis­temology “Minimal Pairs Are Words Holding Hands”; Saman­tha Nock’s nod to Indigenous resistance through humour in “pahpowin”; Louise Bernice Halfe’s “Remember When,” which informs readers that the structure of the Cree language does not include the gender binary of “male” and “female” pronouns.

What I didn’t anticipate from the task of anthologizing was how this process of selection would reveal to me my own penchant for sarcasm. I was struck with how much my eye is drawn to forms and tones that employ irony, exaggeration, or ridicule to expose and criticize not only individual but col­lective human folly. I found the subversive desire to challenge collective or self-limiting social norms or taboo around lan­guage, belonging, religion, marriage, sex, and gender compel­ling: these are all subjects of contradiction ripe for satire. This is reflected in chosen poems such as “If I Die Bury Me Next To My Father,” by Mugabi Byenkya, the final line of which reso­nates for both immigrant and Indigenous peoples alike; and “Origin Story,” by Kazim Ali, wherein someone is always ask­ing “where are you from”—all stinging indictments of Cana­da’s official multi-culturalism.

What I didn’t anticipate from the task of anthologizing was how this process of selection would reveal to me my own penchant for sarcasm. I was struck with how much my eye is drawn to forms and tones that employ irony, exaggeration, or ridicule to expose and criticize not only individual but col­lective human folly.

I am also drawn to the whimsical in Sadie McCarney’s “Bee Funeral” and how its characterization perfectly captures the moodiness of junior high, and Tanis MacDonald’s “Feed­ing Foxes” with its unforgettable image of “Raymond Carver who’s running the weed / whacker without noise-cancelling headphones.” Likewise, in Fiona Lam’s “Ode to the Potato,” Lam’s focus on the commonplace ubiquitous root vegetable de-familiarizes in the tradition of Neruda. Similarly, Abby Paige in “Hoems,” with candor and black humour, generates a poem that reflects the financial realities of a poet.

It’s an honour to read the diversity in Canadian poetry and a joy to choose poems that hopefully reflect what oth­ers might also consider to be poems that fulfill the promise set out in their first syllable, word, syntax, line break, and soundscape. I am reminded of the late and great Gwendolyn MacEwen’s wisdom when she advises us in “Let Me Make This Perfectly Clear” that in matters of poetry, “all you should ever care about / Is what happens when you lift your eyes from this page.”