Eve Lazarus has drawn back the curtain on some of Vancouver’s secret places. Vancouver Exposed: Searching for the City’s Hidden History (Arsenal Pulp) explores some of the city’s hidden history, focusing in particular on the city’s architectural and urban spaces.

Author Aaron Chapman (Vancouver After Dark) says “Fond, funny, and fizzing with some of the most fascinating people and places, Vancouver Exposed is a highly readable and revelatory cultural history chock-a-block with as many illuminating photos as insights into the city itself.”

Eve Lazarus is a Vancouver writer and podcaster with an Aussie accent and a passion for true crime stories, cold cases, and non-traditional history. She is the author of four Arsenal titles: Cold Case Vancouver: The City's Most Baffling Unsolved Murders (2015), a BC bestseller and 2016 finalist for the Bill Duthie Booksellers' Choice Award at the BC Book Prizes; Blood, Sweat, and Fear: The Story of Inspector Vance, Vancouver's First Forensic Investigator (2017); Murder by Milkshake: An Astonishing True Story of Adultery, Arsenic, and a Charismatic Killer (2018); and Vancouver Exposed: Searching for the City's Hidden History (2020). She is also the author of Sensational Vancouver (2014), Sensational Victoria: Bright Lights, Red Lights, Murders, Ghosts & Gardens (2012), and her book At Home with History: The Untold Secrets of Greater Vancouver's Heritage Houses was a 2008 City of Vancouver book award finalist.

Trevor Corkum: Vancouver Exposed takes a look at some of what’s been obscured by the mists of time in Vancouver. In particular, through focusing on the lost and hidden architectural heritage of the city, you rescue important social histories from the scrap heap of the past. Why was this book important for you? 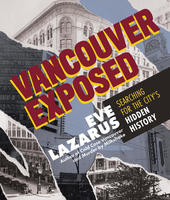 Eve Lazarus: For the past ten years I’ve been obsessively writing a blog called Every Place has a Story. Each week I write about something from Vancouver’s history—a heritage building, a quirky story, an unsolved murder. Over the years people have added to the stories, either with their own memories, relating family lore or sending a photo from the family album. The blog began to act as a sort of repository for other people’s histories and the book became a way to share these histories and photos to a larger audience.

TC: I love the exuberant, almost gossipy tone of the book. It feels like you’re speaking to your reader over a drink at a dinner party, letting them on on important secrets. What’s your own favourite story from the book?

EL: Asking me to pick a favourite story is a bit like asking me to pick my favourite child, there are so many I love for different reasons. There’s the story about the World Belly Flop and Cannonball Championships, the nudist colony that loves to garden, and the fake house that’s hidden in a Vancouver suburb, to name just a few. But one that always makes me giggle, is the story of Chuck Currie’s polka dotted house (see excerpt below).

TC: I loved so much in here, but was struck by some of the secrets hidden in plain sight. I lived in the West End of Vancouver for a long time, but didn’t know about the house that had been in Stanley Park, or the apartment building across from the Sylvia that burned down under mysterious circumstances. What did you learn in your research that most surprised you?

EL: That Vancouver has a rich history that goes way beyond fisheries and forestry and streets named after old white guys that fill many traditional history books and school curriculums. When you scratch Vancouver’s surface there are all these stories of legendary women, of immigrants, and of a rich Indigenous history that has often been overlooked. I’ve tried to bring out a few of these stories in the book.

There’s the residential school that was in North Vancouver for 60 years, the Livestock building at the PNE which housed Japanese women and children during the war, the former Industrial School for Girls on Cassiar Street that’s now a condo building, as well as truly inspirational women such as Jean Mollison, Maxine MacGilvray and Ivy Granstrom.

TC: Given the breathtaking rate of development in cities like Vancouver, what are we in danger of losing when old buildings come down?

EL: Buildings aren’t just bricks and mortar they also hold our social histories, and I believe these stories of people and events help us to connect to a city, to our communities and to each other. When buildings are repurposed they help tell the story of the city, and without these stories and visible reminders of our past we’re much more isolated and disconnected.

TC: What advice do you have for the amateur urban historians among us who long to better appreciate the rich history of our cities?

If you live in an older house or building start to research its history (and you can do most of this online). Find out who lived there, what events took place there, even who died there. Take a walk around your neighbourhood and really look at those buildings, check out the architecture, jot down the address and do a search. I bet you’ll be surprised to find out how much a corner or a section of the city has evolved over the last hundred years or so.

Several years ago, I heard about a white house with red polka dots on the corner of East Third Avenue and Lakewood Drive. It sounded fabulous, so I drove over to take a look. I knocked on the door and was astounded to have Chuck Currie, who at the time was executive chef of White Spot restaurants, answer the door in his working whites. He was just like the celebrity chef he played in the television commercials.

Chuck, who has lived in the house since 1989, and first painted the polka dots with marine paint in 1992, says there’s no big story. His friend John Cobourne was working for a painting company, and his boss went on holiday and came home to find that his crew had painted his house with purple polka dots. The owner wasn’t amused, but Chuck loved the idea and thought it was a great way to liven up his own neighbourhood. The neighbourhood, incidentally, is packed full of gorgeous old heritage houses.

He’s never had a single complaint.

“I still remember the first car that stopped and gaped. It was a cool fall day and the windows were closed, but my friend John and I could clearly see the driver say ‘Holy shit!’ ” I had a sax quartet rehearsal here that Sunday and one of the musicians said he had been talking to a friend in Toronto who asked him, ‘Say, have you heard about that polka-dot house in Vancouver?’ That was five days after we painted it!”

In the ensuing years, Chuck has heard it described as the house with measles, and two little girls from the neighbourhood thought it looked like a ladybug. Another benefit is the paint job seems to attract hummingbirds. John Cobourne is now a top restorer of fine yachts on the West Coast, but he still returns to help Chuck repaint his house every few years.

Chef Chuck, who can rustle up a mean ravioli—he opened up the first Earls restaurant in 1982—left White Spot in 2014, but he still lives in the house. He also plays and teaches saxophone and clarinet. He says the great thing about his house is that students find it easily. And he’s always coming home to find anonymous gifts on his doorstep—bowls, juice pitchers, coffee mugs—all with polka dots, of course.

Reprinted with permission of the author.