Today Janie Chang is recommending the new memoir from Jane Hutton and Tony Wanless, Four Umbrellas: A Couple's Journey Into Young-Onset Alzheimer's. Chang writes, "June Hutton and her husband Tony Wanless have written Four Umbrellas which is about their experience with Tony’s early-onset Alzheimer's. It’s unusual in that generally such memoirs are by the caregiver. In this case, because Tony is a journalist, they made the decision to document their journey together, so you also get first-person accounts from Tony about how it feels, what it’s like, as well as the challenges of working with a healthcare system that doesn’t assume Alzheimer's for younger patients. I feel this is a valuable memoir because the demographics of our aging population will make this a familiar story to many." 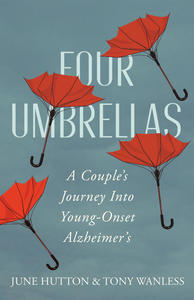 June: Our goal from the outset was to write a book in which the person with Alzheimer’s has a place on the page, too. I believe we did that. Tony’s words punctuate each chapter.

Tony: Got it done.

49th Shelf:  Tell us about your ideal reader, and where you imagine them reading your book.

June: Our ideal reader wants to know why our quest for a diagnosis took so long, and what they can do differently if they have someone of concern among family, friends or co-workers. This person will read Four Umbrellas in a chair or curled up on the sofa with a cup of tea—perhaps something stronger by book’s end.

Tony: In the bathroom. Ideal reader is someone who wants to understand & break the stereotypes.

June: Elegy for Iris by John Bayley. It is a beautiful book, as much about the person as the disease, though I wondered throughout the telling what Iris Murdoch herself had been thinking, and what she might have written about her cognitive changes. Hence the above answer to question 1.

Tony: Lights, by Adam Grant Warren. It’s a stage play about a writer whose mother is suffering with dementia. (Note: As research for the play, Warren interviewed a number of people with Alzheimer’s, including Tony. )

49th Shelf:  What’s something you know now that you didn’t know when you set out to write your book?

June: That changes to the brain can occur ten, 20, even 30 years before the first symptoms appear. When you do the math, you realize how many people were still young when the disease began to take hold. There are details of this in the chapter “Alzheimer’s by the Numbers.”

Tony: How much work was involved. Also, that I did not have to be ashamed because I had a disease.

49th Shelf: What is the best movie you’ve seen on the subject of Alzheimer’s?

June: Leisure Seeker starring Helen Mirren and Donald Sutherland. Canada’s Sutherland convincingly portrays a former professor who presents well and then has cognitive gaps that take your breath away. The U.K.’s Mirren is superb as the spirited southerner and long-suffering wife. Spoiler alert: the ending might upset some. I found it to be the only logical conclusion, and strangely life-affirming.

June: My husband Tony, for the courage it has taken and still takes to come out about Alzheiemer’s in such a public way as a book.

Tony: My wife June, who co-othered [sic] me I should not be ashamed and helped me write the book.

Our goal from the outset was to write a book in which the person with Alzheimer’s has a place on the page, too.

A writing couple searches for answers when Alzheimer's causes one of them to lose the place where stories come from—memory.

At the age of fifty-three, Tony walks away from a life of journalism and into an unknown future. June is forty-eight, a writer and teacher, and over the following decade watches as her husband changes — in interests, goals, and behaviour — until Tony has a fall, ending the life they had known.

A diagnosis is seven years away, yet the signs of Alzheimer’s are all around. A suitcase Tony packs for a trip is jammed with four umbrellas, a visual symbol of cognitive looping. But how far back do these signs go? The couple starts probing the past and finding answers. This is not an old person’s disease.

A Couple's Journey Into Young-Onset Alzheimer's

A writing couple searches for answers when Alzheimer's causes one of them to lose the place where stories come from — memory.

At the age of fifty-three, Tony walks away from a life of journalism and into an unknown future. June is forty-eight, a writer and teacher, and over the following decade watches as her husband changes — in interests, goal …