She writes, "After Elias, by Canadian debut author Eddy Boudel Tan, promises from the start to be a puzzle: an airline pilot about to be married is killed in a crash and immediately pegged as the main suspect in the disaster. But this is no simple mystery, and the layered psychological struggles and revelations of Elias's grief-stricken fiance kept me furiously turning pages until the very end. With chapters that shift through time along with the narrator's emotions, a cast of very real but relatable secondary characters, and a haunting sense of the past, After Elias gifts the reader with gorgeous, economic prose and the pace of a thriller. I couldn't put it down." 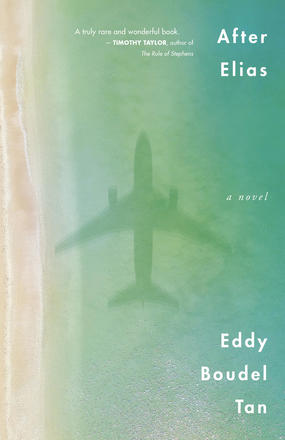 Eddy Boudel Tan: Despite this being the story of a pilot’s death in a plane crash before his wedding day, I think I’ve struck the right balance between light and dark. The themes in this book are heavy, but the story isn’t only about trauma. Like life itself, there’s pain, joy, and everything in between. I want readers to feel all of these things. My favourite reviews are the ones in which people say they found themselves crying and laughing at different points.

49th Shelf: Tell us about your ideal reader, and where you imagine them reading your book.

EBT: This book celebrates how flawed and imperfect we all are, so I wrote it for everyone who has ever felt defective. They may be struggling with something in their lives, and I hope they’re reading it somewhere restorative, like a forest or beside the ocean.

EBT: Burial Rites by Hannah Kent is so immersive. The human elements are heightened by the atmospheric setting, and I wanted to recreate that interplay between the emotional and the physical. I was also influenced by Christopher J. Yates’s style of telling a human-centered mystery.

49th Shelf: What’s something you know now that you didn’t know when you set out to write your book?

EBT: Publishing a book is even harder work than writing a book, but it’s also much more collaborative. Seeing a team and community of people come together to support my work has been the highlight of this journey.

EBT: The present-day storyline is set on a colourful island in Mexico, while scenes from the past take place in my hometown of Vancouver. The Mexican people have such a deeply rooted reverence for death, and this is evident in the ways they understand death and honour those they’ve lost. These customs, from both their Indigenous and colonial cultures, play important roles in the story as Coen, the protagonist, confronts the aftermath of the plane crash.

EBT: My tenacious agent, Jessica Faust, for believing in this strange and wonderful story that’s not easily categorized.

I must also give a shout out to Thomas, my husband, to whom the book is dedicated. His support has been unwavering from day one, doing everything from critiquing early versions of the manuscript to brainstorming titles to filming promotional videos. He’s who I turn to when I need therapy or a celebration. I’m a lucky man.

With chapters that shift through time along with the narrator's emotions, a cast of very real but relatable secondary characters, and a haunting sense of the past, After Elias gifts the reader with gorgeous, economic prose and the pace of a thriller. I couldn't put it down.

When the airplane piloted by Elias Santos crashes one week before their wedding day, Coen Caraway loses the man he loves and the illusion of happiness he has worked so hard to create. The only thing Elias leaves behind is a recording of his final words, and even Coen is baffled by the cryptic message.

Numb with grief, he takes refuge on the Mexican island that was meant to host their wedding. But as fragments of the past come to the surface in the aftermath of the tragedy, Coen is forced to question everything he thought he knew about Elias and their life together. Beneath his flawed memory lies the truth about Elias—and himself.

From the damp concrete of Vancouver to the spoiled shores of Mexico, After Elias weaves the past with the present to tell a story of doubt, regret, and the fear of losing everything.

“Utterly engrossing. Coen is a hero for our era, darkly struggling amid the aftershocks of loss, but doing so with dignity, humanity, and passion.” — Timothy Taylor, author of T …