The “I am Canada” series is addictive. Aimed primarily at boys in Grade 7 and up, these books about war are dark, action-filled and sometimes gruesome. They could work for mature Grade 5 or 6 readers, or also as read-alouds with follow-up discussion close to Remembrance Day. These first-person narratives are so compelling that a reader doesn’t even notice that they’re actually learning history. At the back of each book, there’s a note on the historical accuracy, with photos of original documents and images of the real life characters the books are based on.

The dramatic opening puts the reader right in the thick of war. Paul is an Italian from Alberta who enlists in the Canadian army and finds himself in Italy during a month-long battle to capture (and eventually win) the town of Ortona. The descriptions of vicious street fighting that cost more than 2,300 Canadian casualties elicit all the senses. Paul and his buddies take Ortona street by street, house by house, enduring sniper fire, booby-trapped doors, chairs, and toilets. The effect on the civilians becomes evident through Paul’s connection to a local woman who helps him.

The psychological state of the characters feels very real: “You don’t even notice the adrenaline that pumps through your body when the action begins, but when it’s over, you’re drained. It’s all you can do to stay standing.” Dialogue throughout is quite humorous and shows the relationships between fellow soldiers, with each character embodying a different struggle, including questioning the validity of war. The soldiers have conversations about how they feel when they shoot someone: Paul goes numb while others feel fear.

The story also captures chaotic periods during a battle—the lack of information, the waiting for orders, the death of a close friend. Caution: the word “bastard” appears once.

Sink and Destroy: The Battle of the Atlantic (Bill O’Connell, North Atlantic, 1940), by Edward Kay

The story begins the day Hitler invades Poland and Canada joins the war. Fifteen-year-old Bill, having suffered through the Depression and having watched Hitler in cinema newsreels, decides to enlist. His experience hunting and fishing in his hometown on the St. Lawrence River gain him a place as a gunner on a small warship, escorting convoys of ships carrying fuel, food, equipment and weapons to Scotland. The book follows Bill throughout his training, and then through the longest battle of the second World War, which Canada helped win. Bill endures six years of seasickness, ill health, navigating the “Black Pit”—the part of the Atlantic unprotected by allied airplanes—battling German U-boats. In Glasgow, he meets a girl and returns to her on each trip from Halifax.

This one is for readers in Grade 6 and above, mainly because there’s a lot of battle details, and a kiss with the girl who is later killed by a bomb. Also, Bill is covered with “debris” from his best friend’s body after he’s blown up beside him. It’s an honest look at war, and the way a young man feels trying to do his part. It reveals how the Canadian navy started off with few resources (on Bill’s first voyage there are only 2 small machine guns) and how the technology, such as an early form of sonar, is developed by the end of the war. Bill survives this tale. Again, there’s one use of the word “bastard.”

This one is in the form of a diary, jockeying between two timelines. It begins with Jack’s experience in a Japanese POW camp in Kowloon, after Hong Kong’s surrender to the Japanese. The tale jumps back in time, during hand to hand combat with the Japanese, leading up to the fall of Hong Kong on Christmas Day, 1941. Jack fights in the hills in the skirmishes meant to slow the Japanese advance. The battle was controversial because the Canadians found themselves in a no-win situation, helping the British, with insufficient equipment.

The ending of the story is particularly poignant when Jack unites with the girl he’s pined for throughout the war. He also visits the family of his friend Paddy, as both boys had promised if one didn’t make it out alive. There, he finds the pages of his war diary (the book the reader is holding, I assume), safely left with Paddy’s family. There’s also Gander, the big black Newfoundland dog, who dies by picking up a grenade and running toward the enemy. (True story. There’s a photo of Gander at the end.)

The personal tone of this book—Jack’s thoughts and feelings, the description of his hardships, injuries, hunger, and beatings in the POW camp—bring home the horror of war.

I couldn’t put this one down. Written as a 5-month journal, the story begins in 1944, as 18-year-old Sam’s bomber plane is shot down. The Danish-Canadian parachutes into France, which is occupied by Germany. He’s helped by members of the French Resistance, hiding at farms along his journey, only to be betrayed and captured by the Germans. He and his buddies are taken by train to what they think is a POW camp, protected by the Geneva Convention, but the captured Allied Airmen actually find themselves in a concentration camp along with Resistance fighters. (The Epilogue tells us that many people at the time didn’t believe Sam and the other airmen ended up in Buchenwald.) Sam becomes consumed with trying to escape. It’s heartbreaking to watch Sam’s faith in humanity get torn away as his (and the reader’s) eyes are opened to evil acts. This is an important book in terms of understanding life in a concentration camp.

There are titles which describe historical events unrelated to war, such as, the sinking of the Titanic, the Plains of Abraham battle, building the railway, and—in the case of the following—the Franklin Expedition.

It is the year 1849, George is burying his Captain under a bed of stones. He’s alone and dying of starvation and scurvy with frostbitten toes, having gone through many struggles. The story takes us back to the beginning of the four-year-long Franklin Expedition traversing the unmapped Northwest Passage in the Canadian Arctic. George is a good boy from a reputable family. He meets Davy, an orphaned kid with a knife and a criminal past, who ends up killing a man while defending George. The two boys become friends when they both coincidentally land jobs on one of Franklin’s ships.

Over the course of the journey, which was supposed to take only a year, their ships become trapped in ice and they watch many of their crew die. Davy, the rebellious one, leads a mutiny, while George stays loyal to his Captain until the end. It’s a compelling story that captures the ambience of the time, and paints a picture of a conflicted friendship, one of idealism vs. realism. The story is a tragic one but the reader experiences George’s hope and perseverance through such dire circumstances.

I Am Canada: Sniper Fire

The Fight for Ortona

A young Canadian soldier’s account of the battle of Ortona, Italy!

Seventeen-year-old Paul Baldassara lies about his age to enlist in the Canadian Army. He joins the Loyal Edmonton regiment, which is tasked with taking Italy’s port town of Ortona. Little does he know the horrors of the battle that lie ahead . . .

Paul soon finds himself in the m …

I Am Canada: Sink and Destroy

The Battle of the Atlantic, Bill O'Connell, North Atlantic, 1940

If the Allies cannot send the German U-boats to the bottom of the Atlantic, all hope of winning WWII will be lost.

Sixteen-year-old Bill O'Connell is a new recruit in the Royal Canadian Navy, assigned to a ship that hunts for Germany's feared U-boats. With the European mainland under Nazi occupation, safe ocean passage is critical — but the Germa …

I Am Canada: Defend or Die

A captivating and rarely told World War II story: that of the Canadian troops sent to defend Hong Kong from the invading Japanese.

Nineteen-year-old Jack Finnigan is a born troublemaker. He has grown up defying authority and leaves his small town to enlist in the Royal Rifles, expecting adventure . . . and not afraid of danger. Little does he know … 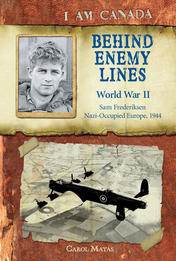 I Am Canada: Behind Enemy Lines

A young WWII gunner from the Prairies sees the horrors of war firsthand when he is captured by the Gestapo.

Eighteen-year-old Sam Frederiksen has come a long way from the Prairies. Trained to be a gunner in a Lancaster bomber during WWII, he is shot down over France. Battered and bruised, he does survive, and joins forces with the French Resistance … 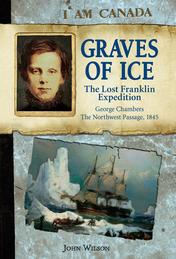 I Am Canada: Graves of Ice

George Chambers is a fourteen-year-old aboard HMS Erebus, one of two ships under the command of Sir John Franklin on his quest to discover the Northwest Passage. But when the Erebus and Terror are trapped in crushing ice, 129 men of the crew die from c …